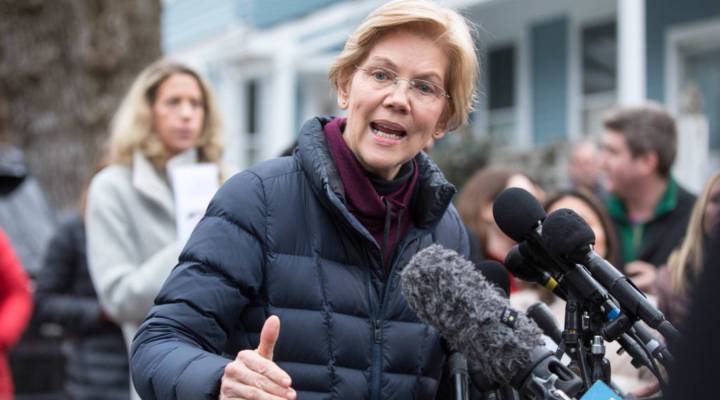 Elizabeth Warren, a Massachusetts senator who’s built a reputation as a fierce consumer advocate, has announced that she’s running for president in 2020. This makes her the first major candidate in the Democratic party to announce a bid for presidency.

In her announcement video, Warren discussed the role of “billionaires and big corporations” in America’s growing wealth gap.

“America’s middle class is under attack,” she said.

Every person in America should be able to work hard, play by the same set of rules, & take care of themselves & the people they love. That’s what I’m fighting for, & that’s why I’m launching an exploratory committee for president. I need you with me: https://t.co/BNl2I1m8OX pic.twitter.com/uXXtp94EvY

Over the past decade, Warren has become a champion for progressives, helping create the Consumer Financial Protection Bureau — a watchdog agency aimed at protecting consumer rights — and going after big banks for predatory lending practices.

We talked to Jess Bidgood, a national political reporter for the Boston Globe, about Elizabeth Warren’s economic background, the types of business and economic proposals she’s pushed for, and how her views compare to those of other potential Democratic candidates. Below is an edited transcript of the interview.

What are the main economic platforms that Elizabeth Warren stands for?

Elizabeth Warren has had a really remarkable rise in politics, and she’s done it by being very consistent in her message of economic populism basically from the day that she first got into politics back in 2011 — electoral politics, that is. She came to politics from academia. She was an expert in bankruptcy law, and she became very interested in the question of why families declare bankruptcy and how certain regulations and the lack thereof affect working families and the ability of the American family to get ahead.

In her analysis, she’s tracked income inequality in America, which has widened. And in her analysis, this isn’t an accident. The way she tells it, this is a result of corporate interests and the ultra-rich getting Republicans in Washington to either pass thin regulations or weaken regulations that benefit them at the expense of others — working people and people who don’t have as much money. It’s not every politician who becomes well-known because they have been deeply steeped in the ins and outs of bankruptcy law. That’s pretty rare. What she figured out how to do and decided she wanted to do kind of starting in the mid-aughts, if that’s what we’re calling them, is tell the story of bankruptcy and an unfairness in the realm of consumer finance in a way that consumers could understand it. So instead of solely focusing on academic articles and books with a zillion citations, she started doing stuff like appearing on some episodes of Dr. Phil and writing books that were really geared toward the average reader and head of household as opposed to an academic audience. I think her economic analysis has really permeated every piece of her politics and her approach to governance in a way that’s rare.

What have been some of her major proposals on economic and business-related issues?

So she’s been pushing — particularly in preparing for her ramp up to run — a few big pieces of legislation while Republicans control the Senate. There’s not a great chance that these pieces will get passed into law, but she’s hoping at least to get them through the House now that the House is about to be in Democratic hands. She has recently put forth anti-corruption legislation that would ban lobbying by ex-lawmakers. She’s also put forth a proposal that she calls “accountable capitalism,” which would require corporations to let their workers appoint some board seats. And she has also, in recent weeks, been pushing a big housing bill that is supposed to create millions of units of new housing and also boost homeownership in minority communities.

She often talks about leveling the playing field by passing regulations that she says would make things more fair, by cracking down on predatory lenders, by creating reforms around student loans — that’s a big thing that she’s worked on — and finding other ways to add what she calls a “cop on the beat.” She says that she likes markets. She calls herself, actually, a capitalist. She says, “I’m a capitalist to my bones.” But her issue is that she believes that when corporate interests are able to get regulations that work in their favor, that distorts the market. And so her thing is finding ways to un-rig the economy, as it were.

Warren and Sanders are very closely associated with each other. They’re both from New England. They’re both very progressive and they both talk about that. Their main message, for both of them, is economic populism. Bernie Sanders rails against billionaires and corporate greed the same way Warren does. One key difference between them is Bernie Sanders is a democratic socialist and Warren has taken care to emphasize that she is a capitalist and she believes in markets. She just wants them to be fair. In her campaign rollout, Warren also emphasized the role of race and racial discrimination in inequality in America. Bernie was not seen as a candidate who is very strong among black voters. And Warren has been working hard to bring that into her economic analysis and to say it’s tougher for working families than it used to be. In her announcement video today, she said families of color face a “steeper and rockier” path because of “generations of discrimination.”

I think one major difference between Warren and Beto is that Warren is very closely associated with her economic analysis, with her views on corporate greed and the “rigged” economy. O’Rourke is younger and has not been as prominent a lawmaker in the Democratic Party as she has, so his positions are less well-known. While he, too, doesn’t take PAC money and talks about the importance of workers benefiting from economic growth and supporting antitrust regulation, he’s just not as clearly associated with that stuff as Warren is.

What other potential candidates on the left are there?

This field is probably going to be so big and so unwieldy. And I think that any candidate that you look at, you can come up with reasons voters might go for them and reasons voters won’t. Beto has obviously caught a lot of attention because of his kind of uplifting political style and his ability to raise a lot of money in that Texas Senate race. Joe Biden catches the attention of maybe party elders and other people who are seeking a more kind of centrist candidate. This is going to be a field where there will be numerous really viable female candidates. Kamala Harris is, I think, someone who’s who’s going to be absolutely a top-tier candidate. Kirsten Gillibrand in New York. Amy Klobuchar. And then, of course, you have all of these candidates who maybe aren’t so well-known now, but who could catch voters’ attention, like Steve Bullock, the governor of Montana, for example, who’s shown he can win in a red state.

In a recent Boston Globe article, you pointed out how Warren has tried to emphasize her ties to Oklahoma by filming footage there. What’s the purpose of that?

Warren has a pretty unusual biography. She is seen as this Harvard professor associated with Massachusetts. And she is that, but she actually grew up in Oklahoma, and I think she wants to emphasize that she wasn’t born in an ivory tower at Harvard. She links her economic message with her past. She talks often about what it was like growing up. Her father had a heart attack, her mother worked a minimum-wage job to make ends meet for the family. I think she also wants to show that she comes from a place that is in the middle of the country and that she understands that place.

The tricky thing for her about talking about Oklahoma is that brings up this piece of family lore: that they have Native American background. And that is something that has been politically dicey for her for a very long time. In October, she released the results of this DNA test in a very glossy, kind of high-production video. She’s been asked for a long time, both on the right and on the left, to prove that she had Native American heritage. Republicans seized on the small amount of Native American blood the test showed she likely had, while progressives were unsettled by her decision to use a genetic test to make a claim about her ethnicity. So it was seen, I think, pretty widely as a misstep. And it called into question her political instincts and the instincts of the team around her in a way that I think makes some Democrats nervous. Since that video was released, I have spoken to some progressives who say, “Look, I wasn’t wild about that video, but I have spoken to her since, or based on what she said since, I think she’s listening to the feedback.” I’ve also spoken to other Democrats who say, “Look, it’s clear that she’s not electable” or “I’m worried that she’s going to make other mistakes.”