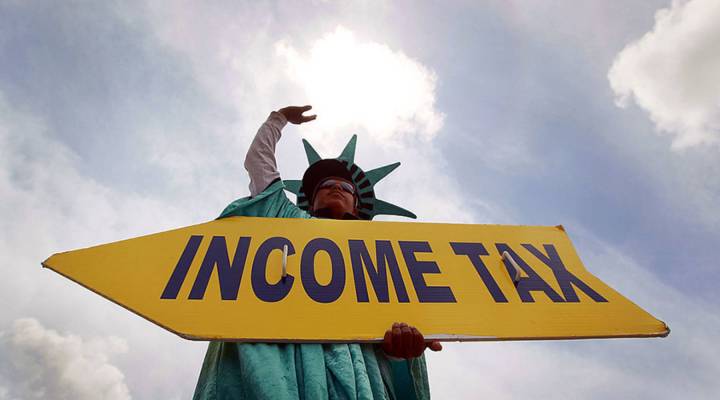 COPY
Anticipating a high volume of calls and the ensuing backlog, the IRS is urging people to prepare as much as possible this tax season. Joe Raedle/Getty Images

Anticipating a high volume of calls and the ensuing backlog, the IRS is urging people to prepare as much as possible this tax season. Joe Raedle/Getty Images
Listen Now

One year ago, Congress passed the Tax Cuts and Jobs Act. It was the biggest overhaul of the federal tax code in 30 years. We’re still learning how the tax law is playing out and what it all means.

1) Surprise! You owe the IRS money.

For most individual tax payers, the new law didn’t take effect until 2018, so they’re entering the first filing season.

About 80 percent of people got a tax cut, according to the Tax Policy Center. But that doesn’t mean you should expect a tax refund this spring. In the U.S., we pay our taxes as we go. Every paycheck, your employer withholds some of your money and sends it to the government on your behalf. The amount is based on choices you make, and on guidelines the IRS gives your company.

This year when the tax rates went down, the IRS told companies to withhold less in taxes from people’s paychecks.

So that tax cut? You’ve been getting it all year, little by little.

Also, the new tax law got rid of or limited a lot of deductions you take at tax time. Which means come April, you may find that you owe the government money.

2) Better get to your accountant’s office early

The tax law is more than a 1,000 pages long, and there’s still a lot of uncertainty about how it will mesh with the existing tax code. Congress passed the law quickly, without thinking through all the ways certain changes would interact with existing sections of the tax code.

“Congress gave the IRS a set of statutes that were not very well-drafted and said, ‘hey, why don’t you go figure it out,’” said Matthew Rappaport, a tax lawyer in New York.

The IRS is trying to figure it out. It’s been cranking out regulations — guidance on what various parts of the law mean — but accountants still have a lot of questions. And there are many regulations to come.

Accountants tell us that this ambiguity is going to make tax season more grueling for them. Preparing tax returns will probably take longer, because they’ll have to double- and triple-check their work and the numbers coming from their accounting software.

A few accountants told us they’ll be busier than usual and may not be able to handle as many clients as before. Some may also raise their prices.

3) Will Congress fix the glitches?

The tax law includes a whole bunch of errors, like typos and dropped words. For example: retailers were supposed to be able to expense renovations to their businesses upfront. But because of a mistake — four words dropped from the law by accident — they have to do it over 40 years, more than twice as long as the period before the change. And so a lot of retailers are holding off on renovations until that’s fixed.

These kinds of mistakes aren’t uncommon in laws of this size. Congress could pass a new law to fix them, it used to do that routinely. But it’s gotten harder to push any legislation through Congress. In this case, the GOP would need Democratic votes to pass a fix and it doesn’t have them.

Something similar happened after Congress passed the Affordable Care Act. That had mistakes too. And because of gridlock, they never got fixed.

The new tax law couldn’t have come at a worse time for the IRS. Congress has been cutting the agency’s budget for years. Its lost 15 percent of its workers over five years.

And then there’s its computer system. As Mark Mazur at the Tax Policy Center told us: “It’s as if the system is held together with duct tape.”

The IRS uses technology that’s decades old, Mazur said. “Every year they tried to upgrade things and they have made substantial improvements. But the basic backbone is still a very old system, one that is in constant need of attention.”

All this at a time when the IRS is trying to figure out all the pieces of the new tax law. The agency has been working away, updating tax forms and pushing out regulations. But it’ll be interesting to see what tax season is going to look like, and if the agency can meet all its deadlines.

One of the most talked about changes in the tax law: the corporate tax cut.

The law lowered the corporate tax rate from 35 to 20 percent. That was supposed to encourage companies to invest in their businesses — to buy equipment, build factories, and hire people. We did see a jump in investment early in 2018, but that has slowed. We’ve also seen companies doing a lot more stock buybacks. It’s assumed that’s because they have all this extra cash on hand from their tax cut.

You may remember, a lot of companies got a lot of publicity for paying their workers bonuses with part of their tax savings.

In 2019, we’ll see how companies continue to spend their tax cuts. And whether those bonuses were a one-time thing.