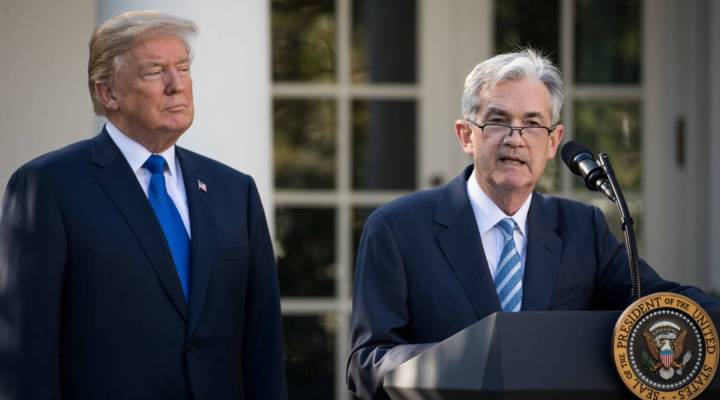 COPY
President Donald Trump looks on as his nominee for the chairman of the Federal Reserve, Jerome Powell, speaks during a press event at the White House last year. Drew Angerer/Getty Images

President Donald Trump looks on as his nominee for the chairman of the Federal Reserve, Jerome Powell, speaks during a press event at the White House last year. Drew Angerer/Getty Images
Listen Now

For the fourth time this year, the Federal Reserve raised interest rates, hiking its benchmark rate a quarter point from 2.25 percent to 2.5 percent.

These increases have “upset investors,” wrote New York Times reporter Binyamin Appelbaum. But Appelbaum said Trump’s own policies — like the trade war with China, the shutdown of the federal government and the GOP tax plan — have played a role in the market’s decline.

On Friday, Bloomberg reported that Trump had discussed firing Powell in a move that would be unprecedented.

Trump’s economic advisers worked over the weekend to reassure the markets this wasn’t the case, Appelbaum said.

Treasury Secretary Steven Mnuchin tweeted that Trump told him “I never suggested firing Chairman Jay Powell, nor do I believe I have the right to do so.”

Appelbaum joined us to discuss whether Trump has the ability to fire Powell and what the consequences would be. Below are some highlights from our interview.

Adriene Hill: So there were reports over the weekend that Trump has asked his advisers if he can remove Powell. And I want to start with just that big picture question here: Can he?

Binyamin Appelbaum: It’s a really big and open question at the moment. The law says that he can only remove a member of the Fed’s Board of Governors “for cause.” And most legal scholars basically may think that that means you can’t remove the head of the Fed just because you don’t like his policy-making decisions. But there’s a separate question about whether he could be removed as the chairman of the Board of Governors just because the president wants to. The law doesn’t address that directly, and some legal scholars think the president has greater latitude to remove Powell from the chairman’s job than to remove him entirely from the Board of Governors.

Hill: What would the implications be if he did push him out — if he tried to push him out, even?

Appelbaum: I spoke with a stock market analyst yesterday who said what we’ve seen to this point in the markets would pale in comparison to what happened if the president removed Powell. And the reason is basically that financial markets have a really strong preference for allowing technocrats to manage monetary policy. They don’t want interest rates in the hands of politicians. The whole reason for the creation of the Fed was to avoid a situation in which politicians, like the president, could exert pressure on the Fed to hold down rates in the short term, goosing the economy, but causing it to overheat with long-term consequences that nobody would probably enjoy. So the fear of the markets would be that the removal of Powell would signal a loss of independence for the Fed, and there’d be a likelihood that investors would respond to that in a way that none of us would probably appreciate.

Hill: Are there other ways the president could move the Fed more to his way of thinking without sort of pushing Powell out?

Appelbaum: Yeah, and you know what’s so striking here is that past presidents have often exercised pressure on the Fed quite successfully in a variety of more subtle ways. So probably the most obvious and important is that the president gets to decide who sits on the Fed’s board. He appointed Powell; he’s appointed three of the other four governors so far. Two more nominees are waiting for Senate confirmation. What’s striking is that all of those people appear to be committed to raising interest rates. He’s chosen people who don’t agree with him about monetary policy, which is kind of remarkable. Past presidents have been much more careful to pick people for the Fed’s board who do agree with them.

Hill: Wall Street seems to be nervous, maybe, about news that came out this weekend about Treasury Secretary Mnuchin making phone calls to bank heads, sort of saying, “No, no, everything’s fine, don’t panic,” when no one was panicking. What do you make of that?

Appelbaum: It was a remarkable display. Secretary Mnuchin has been under enormous pressure from the president to calm the stock market. I think President Trump believes that the stock market can be made to go back up, and he’s demanding that someone do that. And Secretary Mnuchin responded to that pressure by reaching out to the heads of banks to have these conversations on Sunday, where he basically sought their assurance that everything is going fine. But as you say, it was the equivalent of announcing that a problem didn’t exist. No one thought it existed. It’s like saying, “Everybody rest easy, we have plenty of zombie vaccine in store,” and all of a sudden people are thinking about zombies. So it was a very odd performance, and it really appears to have contributed to the market’s decline today. It really freaked people out. It’s the type of thing we only hear a Treasury secretary saying when things are actually going quite badly.