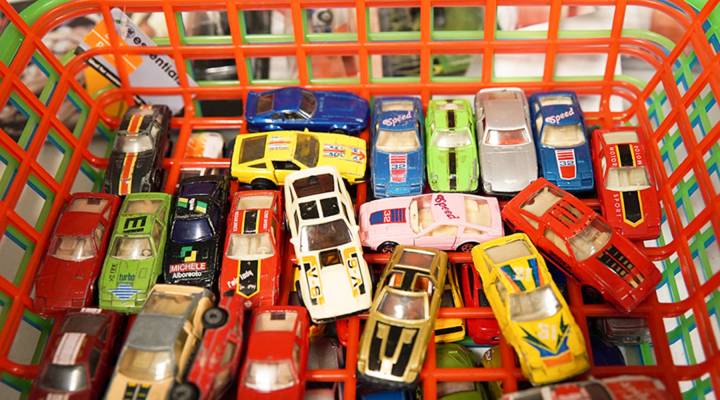 COPY
There are more than 20,000 variations of Hot Wheels, according to Mattel. Renata Sago/Marketplace

There are more than 20,000 variations of Hot Wheels, according to Mattel. Renata Sago/Marketplace
Listen Now

Once a month, Tom Wilson transforms a 4,000 square foot banquet hall in southeast Orlando into the Central Florida Diecast Collectors Show. Inside, the 55-year-old toy car fanatic and his fellow collectors, from baby boomers down to little kids, gather among thousands of tiny metal cars, mostly Hot Wheels.

The cars are lined up by model and color on rows upon rows of tables. Some hang in portable plastic and foam display cases. Others are piled up in boxes, like the one Wilson was digging through at the latest show.

“There’s a Beatnik Bandit down in here,” he said, pulling out a small blue car, then reaching for a purple one. “This is an AMX/2.”

This five-hour show is one of many affairs that take place across the country for die-hard diecast car collectors. At the show, middle-aged men walked by clutching plastic bags filled with cars to add to their collections of hundreds, a little girl sold her yard sale finds for 25 cents each, and a father pushed a stroller as he video-called his own dad to look at the cars. For Wilson, that is the charm of Hot Wheels.

“Anybody in between can collect these cars,” he said.

Mattel has sold more than 6 billion Hot Wheels cars since launching the line in 1968, and the company still cranks out millions of them every week. In 2017, Mattel brought in $847 million from Hot Wheels products. Today, the cars account for about 13 percent of the company’s annual revenue. This year, the company released a diamond-studded  anniversary collectible model worth $140,000.

Wilson was was five years old back in 1968 when Hot Wheels debuted. He remembers watching a commercial in his living room which featured kids racing Hot Wheels  — cars with model names like Custom Camaro and Silhouette. Before then, he had been playing with dinged-up plastic hand-me-downs from his older brothers. But his first set of Hot Wheels had shiny paint and red stripes on the tires, and cost the same as a few pieces of candy: 98 cents.

“We would race all day all then we would get mad at each other, of course, and chase each other around the house with these orange tracks,” he said.

Hot Wheels became the best-selling toy that holiday season. That’s because the original 16 Hot Wheels cars seemed innovative, said Chris Newsom, general manager of the World’s Largest Toy Museum in Branson, Missouri. The original Hot Wheels were designed by a General Motors engineer and an actual rocket scientist, who focused on making better wheels than the ones on Matchbox cars, which had been on the market for 15 years. A tiny push could really make them go.

“Just the design on them was far above and beyond anything else that had come out,” Newsom said. “Just because they were low-friction and they really moved fast.”

Matchbox cars stayed true to the design of real cars. But Hot Wheels were different. They also came with extras like torsion bar suspensions, chrome engines, and power voltages.

“Some of them weren’t real cars. They were more based on fantasy,” said Richard Gottlieb, who runs the research firm Global Toy Experts. “There was a little more eccentricity and therefore a little more excitement.”

Jed Johnson and his sister Amy await collectors at their table.

The cars also became a way for adults to interact with customized vehicles they had wanted. That’s how Miguel Angel Burgos started collecting custom Hot Wheels at 18 years old.

“I couldn’t afford the real ones, so I’m like, you know what? This is a nice substitute,” he said.

“You’re selling a memory that we always had and want to live again,” he said.

Mattel has sold more than 6 billion Hot Wheels cars since launching in 1968.

According to Jackie Breyer, editorial director of the Toy Insider, Mattel has established staying power by embellishing car models that exist, creating new ones, and licensing collectibles tied to popular culture — “Star Wars,” for example.

“It’s a great way to generate business not only with the kids but with their parents,” she said.

The popularity of Hot Wheels has dipped at times, though, which has had to do with the changing image of cars in popular culture. But it also has something to do with changes in the toy industry. Just recently Mattel lost a big distributor when Toys R Us shut down. The company has hit a rough patch. In July, Mattel announced plans to lay off 2,200 workers. But Mattel is keeping Hot Wheels rolling with a design and engineering team of more than 50. And because of low-cost Chinese manufacturing and volume selling, Hot Wheels are still about a dollar  — the same price as 50 years ago when they rolled out of store aisles into parking spaces under Christmas trees.