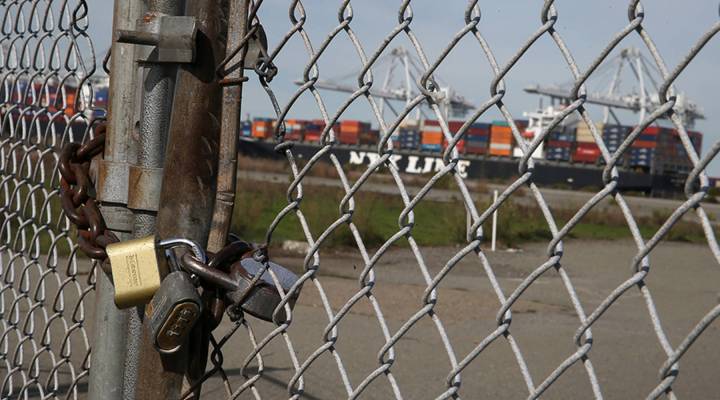 COPY
Container ships docked at the Port of Oakland are seen behind a locked fence in 2015 in Alameda, California. Justin Sullivan/Getty Images

Container ships docked at the Port of Oakland are seen behind a locked fence in 2015 in Alameda, California. Justin Sullivan/Getty Images
Listen Now

Bill Nordgren heard about the possibility of new export controls from a distributor he works with in China. Exports make up about half his business.

Earlier this year, Congress passed legislation directing the Department of Commerce’s Bureau of Industry and Security to establish export controls for emerging technology — technology that has national security implications but perhaps hasn’t existed long enough to be covered by current export restrictions.

“I think what had happened was one of our competitors picked up on it,” said Nordgren, president and CEO of Utah-based FlexSim Software Products, which creates simulation software. “They’re using it already as a marketing campaign.”

FlexSim’s software allows companies to model a process or event to better understand how it works or would react to changes, such as adding extra machinery to a factory. Tesla uses the software to simulate its automotive lines.

Nordgren doesn’t think of simulation software as emerging technology — his company’s been developing it since 1993 — but it’s on a list of technologies BIS has identified for review and on which it’s currently seeking public comment.

The list includes 14 categories, including artificial intelligence, biotech and robotics.

“It is very broad,” said Ed Black, president of the Computer and Communications Industry Association. “It is, in fact, potentially very sweeping and could impact, depending on how it evolves, a very wide number of companies, industries and a big part of the economy.”

Because it’s still early in the review process, it’s difficult to anticipate how much of the listed technology may actually wind up subject to new export controls, such as requiring companies to apply for a license to be able to sell abroad.

One factor the government will look at is how widely available these technologies are outside the United States.

“Often the key factor is whether or not you have the ability to exclusively control the product or whether you need other participants, other countries to agree with you,” said Black, who previously worked on export controls in the State and Commerce departments.

Another factor is how export controls might affect the development of new technologies. Black said American firms benefit from being able to sell to global markets, as well as interact with scientists and competitors around the world.

“If you try to bottle it all up, you may stifle the innovation, growth and knowledge,” Black said. “Therefore, you actually hurt your ability to stay avant-garde because you’re not interacting and learning from others.”

“This is extraordinary that the government would give itself this assignment,” said Andy Shoyer, a trade lawyer with the law firm Sidley Austin. “It’s breathtaking in its aspirations, [but] whether it will end up with a broad set of new restrictions, we just don’t know.”

This process doesn’t exclusively target China, but Shoyer said it is largely driven by fears that China will gain access to U.S. technology, a main battleground of the ongoing U.S.-Chinese trade war.

“This is the trade war, not the tariffs per se,” he said. “When you think about real value in the economy, it’s really based on technology. The movement of technology is more likely to define winners or losers going forward than the application of border restrictions on goods.”

While tariffs have come directly from the White House, these export controls were a congressional initiative, one Shoyer said predates the Trump administration and will likely outlast him as well.