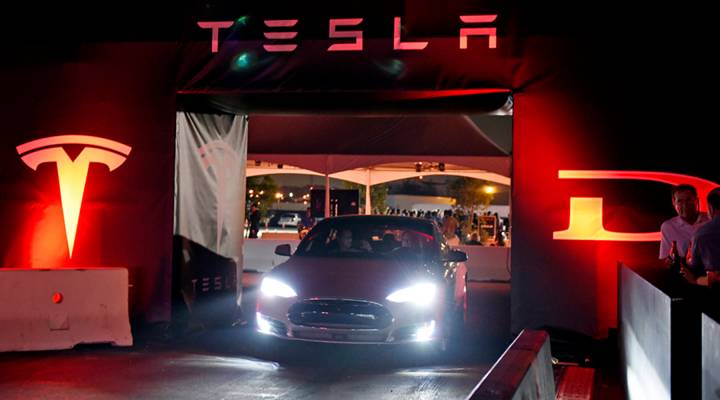 At the beginning of 2018, who’d have thought that by mid-December, Tesla stock would be on the rise, the company would be churning out Model 3 cars to great reviews and Wall Street analysts would be predicting sustained profits for the company? That’s all true, but it’s not because everything has turned tranquil at Tesla.

Host Molly Wood talked with Charles Duhigg, who just took a deep look at the firings, the outbursts and the output over the last six months of drama at Tesla for a story in Wired magazine. The following is an edited transcript of their conversation.

Charles Duhigg: What’s changed is that Tesla has changed. As [Elon Musk] became more anxious and more stressed and, as he put it, as they were going through a manufacturing hell, the company bore a huge brunt of that. And a lot of the people who for a long time sort of served as a check on Musk, a lot of those folks left. And the people who remain are people who are not as practiced or as willing, I think, to push back, and that, as we know in other companies, can sometimes lead to problems.

Molly Wood: Well, in some ways, it feels like the real story here is the people who are still at Tesla who are making this happen. And in fact you quote an executive who says, “What’s really amazing is that we hit that Model 3 production milestone despite all of this.” And you wonder sort of how long can Tesla keep succeeding or succeed at all despite Elon Musk?

Duhigg: Well, that’s the big thing that everyone mentioned to me, is they said, “Look, automobile companies, they succeed because they have one car they’re making really well and because we believe they’re going to make other cars in the future, different kinds of cars to keep up with the marketplace.” And the question is, since Tesla has lost so many executives, so many people who said, “I just can’t work here anymore” or were fired, can the company find the talent it needs to design the cars for tomorrow? I think the other part of that question, which is really interesting, is there is a basic tension within Silicon Valley right now. Is it all about the genius inventor or is it about the teams, the organization that’s larger than any one person, that pushes through success?

Wood: Are people going to buy the Model 3, you know, at $20,000 over the originally advertised asking price or at a higher price than EVs from Chevy or Hyundai or Kia because of that Elon Musk mystique?

Duhigg: I think that’s a really interesting question, right? What happens when your brand is so tied up with one person and that person sometimes acts unexpectedly or erratically? And as electric vehicles become less of a novelty and more of a mainstream product, how many people are going to say, “Oh, I want that one that proves to the world that I’m an iconoclast”? And how many are going to say, “You know, I just want a really good and inexpensive ride”?