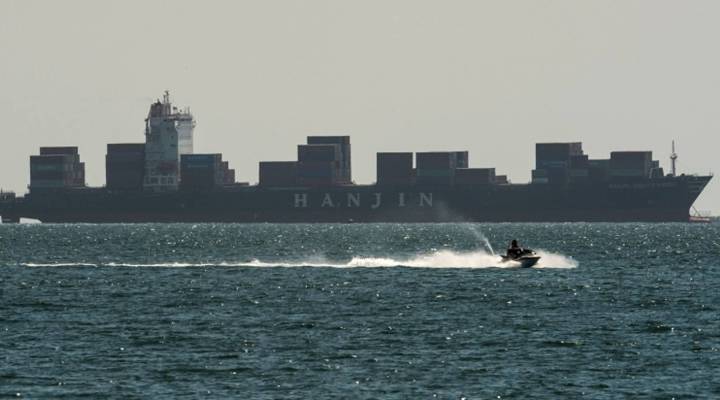 COPY
If the shipping industry were a country, its emissions would rank sixth in the world. Photo credit should read Robyn Beck/AFP/Getty Images
Marketplace Tech Blogs

If the shipping industry were a country, its emissions would rank sixth in the world. Photo credit should read Robyn Beck/AFP/Getty Images
Listen Now

The United Nations’ International Maritime Organization is committed to cutting shipping emissions in half by 2050. That matters because shipping moves 90 percent of global trade. Right now, if shipping were a country, its emissions would rank sixth in the world. Part of the solution will be tech. Marketplace’s Jed Kim talked with James Corbett, a professor in the School of Marine Science and Policy at the University of Delaware, about high-tech sails. And, no, these aren’t the flapping sheets you’re thinking of. Corbett talks about one solution being developed in Japan — a rigid surface covered with solar panels. The following is an edited transcript of their conversation.

James Corbett: Having the ability to create a hybrid power system that is using the opportunity to expose these rigid surfaces to light and extract the solar power from them and store that into batteries that will be located down near the engine spaces and use those big solar panels as movable sails to adjust to the angle for maximum wind assist is going to be a real exciting kind of innovation that will work on some vessels, and it’ll work on those vessels better in some routes where they can best take advantage of both sun and wind.

Jed Kim: Any time you’re talking about any of these changes, we’re talking about affecting, potentially impacting, something that’s incredibly vital, which is global trade. Are there any potential risks that could come with transitioning away from fossil fuels?

Corbett: Well, in 2007 and 2008, vessels unilaterally, all container ships especially, unilaterally slowed down without waiting for the world supply chains to say it was OK. And what ended up happening is we shifted to larger vessels, used economies of scale, and if you look at the seaborne trade curves today, you’ll see that we’re continuing to increase the amount of goods we deliver per year but we’re delivering them in larger delivery units, less often with a slower supply chain. So I don’t see that there will be a imminent threat to the global trade of goods. Ships have known since Phoenician times that their first job is to serve the world’s economies, their second job is to not sink and their third job is to be good stewards of the environment. And what’s happening this century is they’re paying a little more attention to that third goal without compromising the other two.

What does solar energy mean to you?