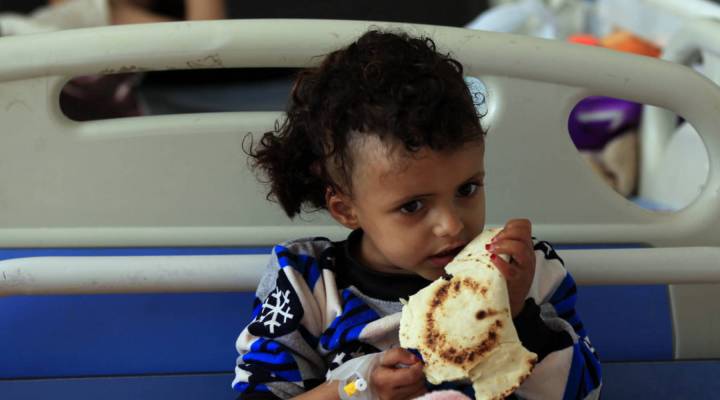 COPY
A Yemeni child suffering from a diphtheria infection nibbles a piece of bread on a hospital bed in the capital Sana'a in October. MOHAMMED HUWAIS/AFP/Getty Images

A Yemeni child suffering from a diphtheria infection nibbles a piece of bread on a hospital bed in the capital Sana'a in October. MOHAMMED HUWAIS/AFP/Getty Images
Listen Now

In the midst of a devastating civil war, the people of Yemen are facing dire consequences, including the world’s worst hunger crisis, according to the Food Security Information Network. And the situation is only expected to get worse. According to Relief International, 22.7 million of the 27 million people in Yemen are reliant on humanitarian aid. But violence near ports makes it difficult for aid organizations to reach civilians, and those in remote locations are even harder to get to. Rama Hansraj is Relief International’s Yemen country director and joined host Sabri Ben-Achour via Skype from Sana’a, Yemen. They spoke about the situation on the ground, barriers to delivering aid, and utilizing cash as a form of relief. Below is an edited version of their conversation.

We are a bit alarmed at the dramatic deterioration of the situation over recent months in Yemen. There are millions of people whose lives are at risk of famine. To be precise, 22.7 million people are dependent on humanitarian aid right now, while the country’s population is 27 million. Out of those, we’re seeing 400,000 children under the age of 5 suffering from acute malnutrition. And we have almost 2.3 million internally displaced people moving around the country. There’s an Integrated Phase Classification report on food security that is supposed to come out in a couple of weeks that should give good indicators of the actual situation on the ground, but it is deteriorating.

How do you get aid to civilians in a war zone?

It has been quite difficult for us to reach out to the neediest populations in Yemen, especially in the remote locations not visible on the frontlines of the conflict. Relief International does have a good relationship with the authorities, but it’s obvious that in a situation like this, it’s difficult to get humanitarian access while dealing with a lot of bureaucratic impediments on the ground. Even the process of conducting humanitarian needs assessments is difficult because samples are drawn from the most accessible areas, making those vulnerable areas more vulnerable.

One of your biggest aid programs involves giving out cash or cash vouchers. Why cash in a situation like this?

We do a combination of direct food distribution, vouchers and cash.

In mostly urban areas, we prefer to provide cash to the families. There are two reasons: One is Relief International believes people should access aid with full dignity. And we believe that providing cash instead of just distributing food gives them the dignity and the opportunity of buying whatever they would like. [Second], we also believe that by infusing cash, the family is also able to sustain the local markets, especially the small and marginal traders who are operational in Yemen.

In areas where markets are functional, we are able to help people through vouchers. We would like to see the economy basically sustaining [itself] through whatever aid infusion is going into the communities. We do a lot of vouchers for food, but in areas where there are no markets available, we do direct food distribution.

How do you actually get the cash in and distribute it without a functioning central bank there?

In Yemen, there are difficulties with the banking system, but the private banks are still operational. And we do use private banks to get aid to families. One of the biggest programs we are going to start early next year, with support from UNICEF, is reaching out with cash support to almost 36,000 families in Aden. We are proposing to do this by working with [the World Food Programme], which is in turn contracting banks and other financial institutions to deliver cash to the beneficiaries living in remote locations. It’s still possible, even though the situation is dire.

Despite the efforts of many organizations, there are parts of Yemen nobody can reach where a lot of suffering is going on. What would you say to the negotiators who are trying to find an end to this conflict?

We are really appealing to all the parties to end all hostilities and really commit to the cease-fire and to give peace a chance. The talks in Sweden this week are very, very critical in that way.