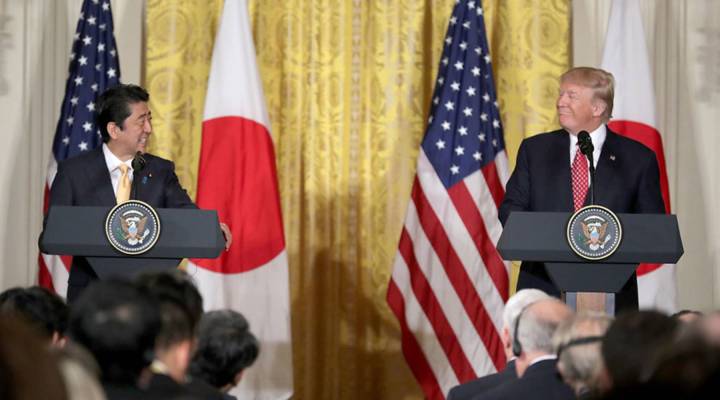 At the meeting of G-20 leaders this week in Argentina, President Donald Trump and Chinese President Xi Jinping will have a much-anticipated meeting, attempting to resolve trade tensions between the world’s two biggest economies.

President Trump has long complained that China takes advantage of the U.S. when it comes to trade, arguing the U.S. needs to stand up to unfair Chinese trade practices that harm American innovation and workers.

Those sentiments echo trade tensions from four decades ago, when Americans were worried about the rising dominance of another Asian economy – Japan.

American concerns about its trade relationships, and Japan specifically, began brewing in the 1970s, but really took hold in the 1980s, says Douglas Irwin, a trade economist and historian at Dartmouth College.

Japan’s economy was booming; its exports were growing rapidly – cars, like Toyota and Honda; semiconductors, consumer electronics, like video recorders and even the Walkman.

In contrast, the U.S. economy was in recession in the early 1980s, caused in part by the Federal Reserve raising interest rates to combat double-digit inflation. A strong dollar added to the pain of U.S. producers, making their goods less competitive abroad.

“A lot of blue-collar workers in manufacturing were hit hard,” Irwin said. “Unemployment rate went way up. Trade got some of the blame for that, particularly in autos.”

In 1981, under pressure from the Reagan administration, Japan agreed to limit the number of cars it sold to the U.S., known as a voluntary export restraint (VER). There was a VER for steel as well and, throughout the decade, the U.S. imposed tariffs on semiconductors and other goods it thought Japan was dumping (selling at unfairly low prices) on the U.S. market.

Trade became an issue in the 1984 presidential election. Then-presidential candidate Walter Mondale, campaigning against President Ronald Reagan, famously asked, “What do we want our kids to do? Sweep up around the Japanese computers?”

In a 1986 address, Reagan touted the benefits of free trade, while also warning that, “Our patience with unfair trade isn’t endless, and we’re taking action to bring other nations back in line to ensure that free trade remains fair trade.”

Japan accepted U.S. trade restrictions without retaliating because it was an ally dependent on the U.S. for military security, according to Dartmouth’s Irwin, but that doesn’t mean the restrictions were successful.

For example, in the case of automobiles, the restrictions did boost domestic auto sales and encourage Japanese automakers to move some production to the U.S. However, because there were restrictions on how many cars Japan could export to the U.S., “it sort of fostered the rise of Korea’s industry,” Irwin said. “We started importing more cars from Korea, even as we were importing fewer from Japan.”

Moreover, despite these policies, the U.S. trade deficit with Japan continued to grow.

Most economists don’t view trade deficits as an inherent problem, but to the extent that these policies were supposed to close that gap, they didn’t succeed.

But eventually, Americans began to outgrow their concerns about Japan.

“By the time we got to the late 1990s, the United States was much less worried about this,” said Lee Branstetter, an economics and public policy professor at Carnegie Mellon University.

“In the 1980s, Americans were really worried that the United States was no longer on top anymore,” he said. “We were no longer making the best technology. It wounded our national pride.”

But fast forward a decade, American fears about its technological leadership began to subside.

“In the 1990s, it was really American companies that were inventing this new world of the internet and e-commerce,” Branstetter said. “The Japanese were playing catch up.”

Japan was entering its lost decade. As its bright shiny economy faltered, it wasn’t as threatening.

However, Branstetter said the concerns with respect to China are a bit different. China hasn’t agreed to U.S. trade demands; it’s retaliated with its own trade protections and is not a U.S. ally.

“There are geopolitical reasons to be concerned about China’s technological and economic rise that didn’t exist with respect to Japan,” he said.