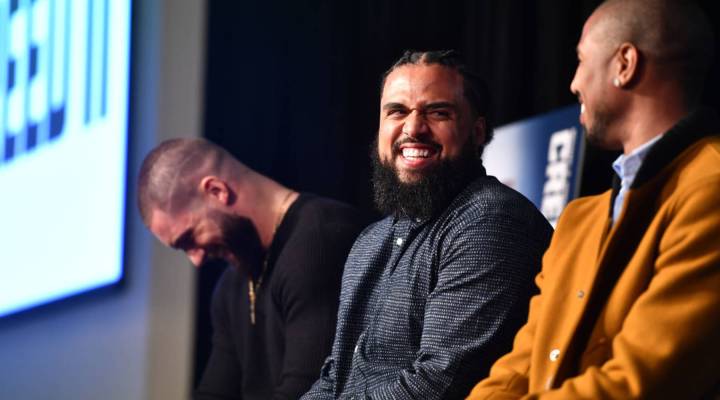 At this year’s Thanksgiving box office battle, Disney’s “Ralph Breaks the Internet” is expected to win big. But “Creed II,” directed by Steven Caple Jr. and starring Michael B. Jordan, will likely get some punches in as well. The first “Creed” film grossed $173,567,581 worldwide and helped launch director Ryan Coogler’s career.

“Creed II” is the eighth installment in the Rocky franchise, and for Steven Caple Jr., it’s a chance to jump from the world of low-budget indies into a whole new ring. The following is an edited transcript of his conversation with Marketplace’s Kimberly Adams.

Kimberly Adams: What went through your mind when you got a call from MGM asking if you wanted to direct “Creed II”?

Steven Caple Jr.: Different emotions. I would call it a wave of emotions. First, it’s exciting right? When you’re like, “oh man, I’m about to be a part of a huge franchise, or have the opportunity to.” And then just nervousness — it’s a sequel. You want to make sure it’s good. How can you go big without ruining what was great in a first one, or what people loved in the older “Rocky” films? All that was like, running through my mind when trying to say “yes” to doing this project.

Adams: So how different is this from the films you’ve directed in the past?

Caple: It’s different in many ways. I mean one, I’m dealing with a lot of actors and established characters already which I’ve never done before. Stuff I’ve done in the past — smaller independent film, you know, did the Sundance route, film festival circuit and it ended up in a few theaters and I’ve done some TV work. Now you know, it’s just a bigger scale, a bigger project.

Adams: And a bigger budget. “The Land” which was your last film was a one million dollar film, Creed II had something like a 40 or 50 million dollar budget. How did that play out in terms of how you chose to direct the film?

Caple: You have to kind of go to the basics. I mean, when you get into a film that’s just bigger in general and has a bigger scope and people like, “hey we’re going to try to sell it worldwide.” There are certain markets and beats and moments within a film that you kind of want to hit. Usually they would say more explosions, but in this case, you know it’s more fights. And I think a big thing people don’t consider is, the fighting sequences, they cost a lot of money. You know visual effects, trying to sell the fact that you’re in a stadium with a hundred thousand people. You know, that I can definitely put a dent in the budget. But tonally it’s all about characters. So you can’t really get caught up in necessarily the hype or the money.

Adams: Where do we see you the most in this film?

Caple: I would definitely say, the relationships. The Tessa Thompson character and Michael B. Jordan, there’s just these small intimate moments between the two. And you know, my style is a little different. I try to find a nice blend of genre and reality. But ultimately, I just go down to the heart of it. At the end of day, that’s what it’s about for me.

Adams: Films with black leads or even majority black casts are still pretty rare in Hollywood even with the successes of movies like the first “Creed,” “Black Panther,” “Girls Trip.” Why do you think that is?

Caple: Oh man, I think just in general not just black but even with female leads. You know, I think now is it time for us to create this movement and now we’re having more of us behind the scenes. So you’re start to see more pictures like that now with Ryan Coogler being an executive producer on this, me being a director, I brought in a black writer named Juel [Taylor]. You know, I think we’re going to see these waves of films with people of color and women that can sell in the universal market because we’ve proven it. We play a huge part in trending and what it means to be hip. And now you can track these things. You know before I feel like it is a little harder. Now you have numbers everywhere. How many likes do you have? You know how many comments do you have? Those are all examples of how we’ve transcended. You know, black people and women can sell films too.

Adams: At this point, how much does this movie success at the box office matter to your career?

Caple: To my career? Uh probably a lot. (Laughter). Probably a lot. To me personally? Meh, I just want a good movie. I just want people to respond to it and relate. I’m not really chasing a number at all. You know, I think the studios are obviously, everyone wants a successful box office weekend. But for my career, you know, if it does well, I feel like people will start to respond more to me, the material I put out there, what I’m going to do next. That’s kind of a nature of the beast. It’s like there’s one step and the next thing you know the door’s just flood open and everybody has to do something, but I think I’m just going to continue to be myself, see who I connect with, what I connect with and yeah. That’s it. Pretty simple.