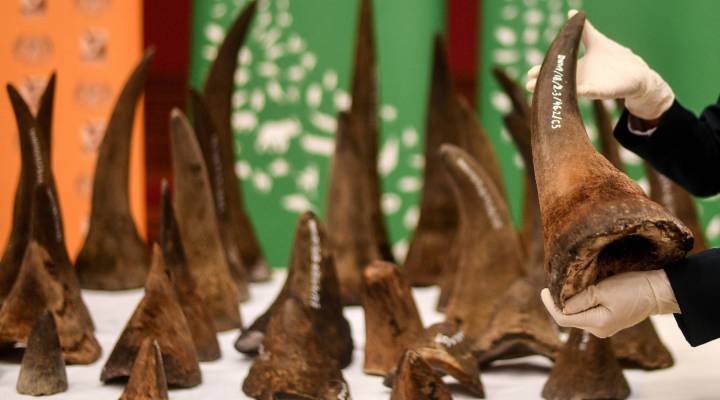 COPY
A Malaysian Wildlife official displays seized rhino horns and other animal parts at the Department of Wildlife and National Parks headquarters in Kuala Lumpur on August 20, 2018. MANAN VATSYAYANA/AFP/Getty Images

Smugglers used to traffic in goods like textiles and tobacco, using old established trade routes. But technology has added new routes, anonymity for buyers and sellers and new products like like rhino horns, drugs, child pornography, and even humans.

George Mason University professor Louise Shelley found this illicit trade is central to larger-scale threats like climate change, and she wrote about it in her new book, “Dark Commerce.” Below is an edited transcript of our conversation with Shelley.

Tracey Samuelson: Where smugglers were maybe once trading black market tobacco and textiles — those routes are still in existence now but with different products?

Louise Shelley: Very much so. So for example, the old smuggling routes of the Ottoman Empire between North Africa and Europe are now not being used just for goods but are key routes for the smuggling of people.

Samuelson: So if these routes are so well-established, why is it so hard to crack down on the smuggling?

Shelley: Because the scale is now so massive, and often the illicit travels with the illicit. And so much of it is being ordered online. And the direction and the supply chain messages are going through new social media, that people cannot track and find these illicit shipments. So it’s like looking for a needle in a haystack.

Samuelson: So it’s hard to track the physical goods, but if there are are digital forums where buyers and sellers meet, why is it so hard to shut them down?

Shelley: We have legislation that does not make platforms and social media responsible for what they are communicating. So just as we have had an explosion of fake news that has been so hard to shut down, the same thing is going on in the illicit trade.

Samuelson:  You devote a chapter of your book to the poaching of rhinoceros and the smuggling of rhino horn. Can you tell me about that case study and what you think it tells us about illicit trade today?

Shelley:  Most forms of illicit trade are not visible. We don’t know the scale of this phenomenon, but with the killing of the rhino, it’s very evident. So, from the 2000s when we had seven rhino killed a year, we’re now finding about 1200 rhino that are being killed annually, and this is leading to the extinction of this animal. The sales are going from South Africa to Vietnam and China, where there is an enormous interest in rhino horn as an investment, as a medicine, as a rave drug, and this is leading to the extinction of the species. And I call this the problem of “dysfunctional selection.” Just as we’ve had natural selection that Darwin described where we had survival of the fittest, now we have the death of the fittest because the most healthy animals with the largest horns are the ones chartered for elimination. And all of this is going on because of transnational crime and corruption all along the supply chain.

Samuelson: For the average person, the only contact they might have with this kind of illegal trade would be buying a counterfeit jersey or a handbag. Why does this matter?

Shelley: People have much more contact than they realize. Every cell phone that they purchase, every computer that they use has coltan, and much of that is illegally obtained and part of an illegal supply chain. So this is much more a part of our lives because trafficked labor is responsible for many of the things that we use in our daily lives. But what the end consequence of this illegal trade in trees and fish and water and environmental product is that we’re leading to a planet that is becoming less sustainable, and as the world’s population continues to grow we may not be sustainable on this planet. And as I conclude the book, there are no jobs on a dead planet.