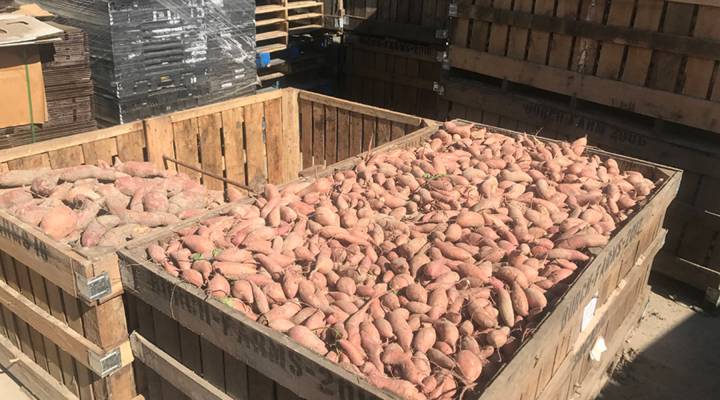 COPY
Jimmy Burch, owner of Burch Farms in North Carolina, said he lost about a third of this year's sweet potato crop because of rain from Hurricane Florence. Andy Uhler/Marketplace

Jimmy Burch, owner of Burch Farms in North Carolina, said he lost about a third of this year's sweet potato crop because of rain from Hurricane Florence. Andy Uhler/Marketplace
Listen Now

North Carolina is the largest sweet potato producer in the country. Almost three-quarters of the nation’s fresh sweet potatoes are grown there — those you might want to use in your casseroles and pies this Thanksgiving. But this year’s crop took it on the chin, thanks to Hurricane Florence.

Jimmy Burch sits in a recliner in his office adjacent to the 8,000 acres he farms in southeastern North Carolina. He rattles off his crops.

“Collards, kale, cabbage, turnips, rutabagas, beets, and then we do a lot of sweet potatoes,” Burch said. “That’s our business.”

Burch Farms is one of the largest vegetable growers in North Carolina. When Hurricane Florence came through in September, Burch said his farm received 26 inches of rain in four days.

“It was over a million dollars washed down to the Atlantic Ocean,” he said. “It’ll take me four or five years to make it back.”

Burch didn’t know the full extent of his loss until he began digging his sweet potatoes out of the ground a couple of weeks ago. He ended up losing about a third of the crop.

“It kicked my ass, that’s what happened,” Burch said. “It was bad, very bad.”

“And many people say that farmers have crop insurance on these crops,” Wooten said. “Well, you do on some of these major commodities like corn, soybeans, cotton, but you don’t have it on sweet potatoes.”

Wholesale prices for North Carolina sweet potatoes jumped $2 a carton in the weeks after Florence hit. But sweet potato prices have been down for years.

Burch said even before the storm, things weren’t looking good for farmers like him. Escalating labor costs and competition from overseas have squeezed margins.

“Farmers are really great people over all, but we’re a dying breed, and there’s nobody coming along to take our place,” Burch said. “I don’t know who in the hell is going to feed this world after a while.”

In order to keep up with population growth, the United Nations estimates that worldwide food production will need to double by 2050.