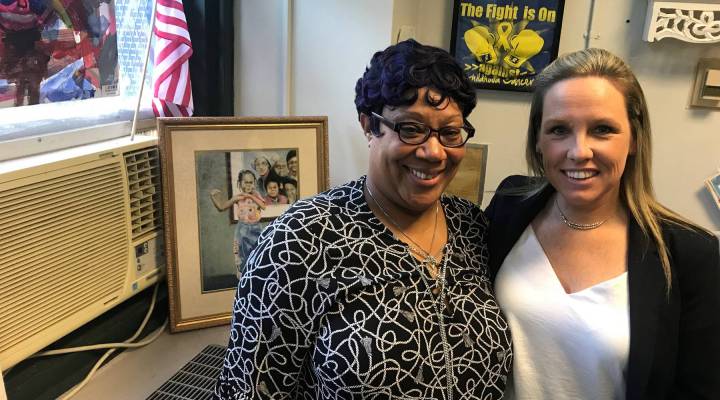 COPY
Social worker Carol Graham and Principal Danielle Keane at PS/MS 5 in the Bronx. With more than 700 kids from preschool through 8th grade, more than 150 are in temporary housing. (Julia Simon/Marketplace

Social worker Carol Graham and Principal Danielle Keane at PS/MS 5 in the Bronx. With more than 700 kids from preschool through 8th grade, more than 150 are in temporary housing. (Julia Simon/Marketplace
Listen Now

The numbers of homeless students are highest in the Bronx, where 10-year old Tajah Ford lives. A fourth grader, she wears tiny unicorn earrings and purple glasses. She moved into a shelter with her family in June.

“When I got there it was, it was crazy,” she said. “It was really different, I’d never been in that place before and we all had to share a room and it was like difficult,” she said. “Really difficult.”

These days, her family wakes at the shelter at 5:30 each morning. Then Tajah and her brother head out into the city, taking the train from the Bronx into Harlem for school.

Tajah’s commute is 45 minutes, but many students who live in shelters travel more than two hours each way to get to school each day according to Danielle Keane, the principal of PS/MS5, an elementary and middle school in the Bronx.

“And then we’re expecting them to go home, do their homework, deal with whatever else they’re dealing with, and then get back on the bus at 5, 6 o’clock in the morning to get here and be perky and ready to go,” Keane said, “And it’s not happening.”

Lots of things aren’t happening for these students. In the corner of Keane’s office, near the door, a small black duffel bag lies on the floor. She points to the bag. “That’s a shelter child that dropped their clothes off and said ‘can you wash them?’ And they leave it here and we go and wash it across the street.”

Keane’s school has more than 700 kids, from preschool through 8th grade. More than 150 don’t have permanent housing — living in shelters or cars, or, for many of them, doubled up with family or friends. She says these kids often have trouble showing up for class, with some missing 84 days of school in one year.

Earlier this month the New York City Department of Education announced plans to spend up to $28 million this school year on special programs and personnel to help students in temporary housing. This includes funding for a group of social workers who specialize in working with homeless students.

Carol Graham is one of those social workers — she works with students at Keane’s school. She says that with one in five of the school’s students is in temporary housing, the faculty is dealing with a lot more than just education.

“So we’re doing dual purposes here,” she said “Meeting their social and emotional needs as well as educating them.”

Ten-year-old Tajah Ford says she’s about to start at a new school that’s closer to the shelter where her family’s staying. She’s happy to not wake up so early, but not excited to leave her friends at her old school. Mainly, she hopes that soon her family finds a permanent place.

“That would be great,” she said smiling, “More than enough, marvelous.”