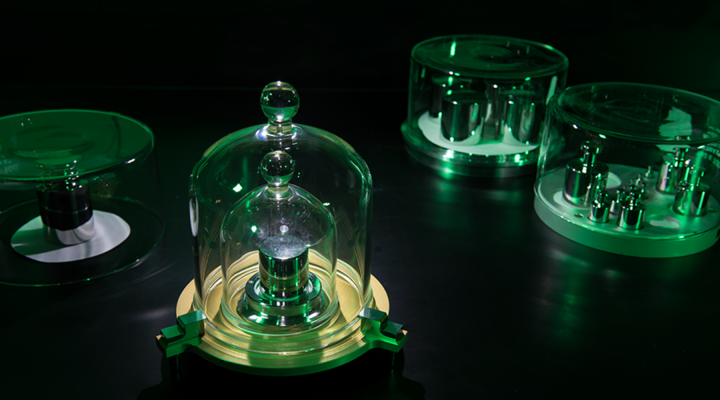 If you’ve weighed yourself recently, it may be some comfort to know that what you think you weigh is wrong. That’s because the International Bureau of Weights and Measures has voted to change the way we define a kilogram.

For an economy to function, it must have weights you can trust. Everyone has to be on the same page when it comes to how much gold to trade for your cow. For more than a century, the world has agreed that the mass of a kilogram is defined by a precisely cast slug of metal in France. All masses get compared to that one mass.

But there’s a flaw in the system.

“Though it’s kept in a vault in bell jars, it still manages to pick up material from the atmosphere. And then when you wash it it loses some of its material,” said Jon Pratt, chief of the quantum measurements division at the National Institute of Standards and Technology. “And so we never really know what what its value is.”

NIST, which falls under the U.S. Department of Commerce, is the nation’s authority on weights and measures. Pratt said science has progressed to where we can now look at universal constants, instead of physical objects, to base our measurements.

“[We said] if we got the requirements met to satisfy the redefinition, measured Planck constant at NIST to less than 50 parts per billion, we’d all get inked with the numbers.”

They actually achieved an uncertainty of less than 13 parts per billion. Their tattoos will stay on their bodies for the rest of their lives, but the work they’ve done will help redefine the kilogram for the rest of human existence.

As for how much the kilogram is actually changing, it’ll be practically infinitesimal. Still, it’ll be a lot of paperwork, as pretty much any business that relies on weight and density — such as pharmaceuticals, food, manufacturing — will have to recertify their measurements.

For some, though, the change is more significant. Julia Greer researches materials science at Caltech. She builds nanoscale structures out of everyday materials and examines how their properties change at such small scales.

On a recent Friday, she pulled out a structure she’d created out of nickel and placed it in my hand. Its weight was undetectable.

“This was world’s lightest material for about three weeks, and then these graphene guys came and made an even lighter one,” Greer said. “But it was exciting for a while.”

She said when you work on things as small as a few millionths of a meter, with super small densities, any change in the standard kilogram is going to be more significant.

“That redefinition is going to shift it ever so slightly, which is going to affect a lot of different parameters from battery performance to density to the various fields: electric fields, magnetic fields, etc.,” Greer said.

The upside is that this is the last time such a reorganization will have to happen. And, in fact, Pratt said his colleagues are working to develop a tabletop version of their balance, which would allow any business to determine its own, unassailable measure of mass.

Correction (Nov. 16, 2018): A previous version of this story misidentified the U.S. Department of Commerce. The text has been corrected.