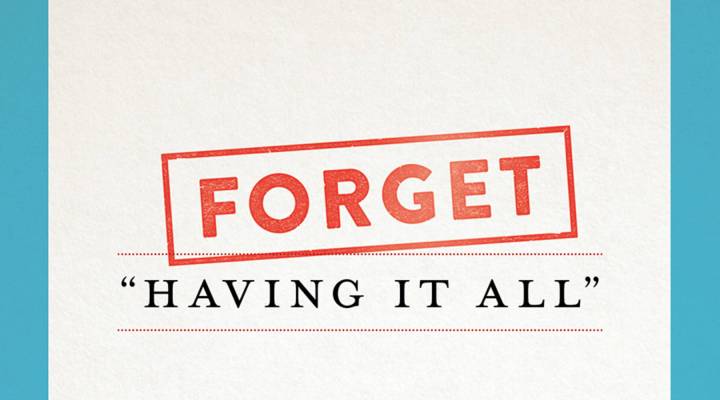 A new book by Journalist Amy Westervelt explores the challenges many working mothers still face today. In “Forget Having It All: How America Messed up Motherhood — and How to Fix It,” Westervelt digs into American history, the economy and workplaces around the world to look at what shapes American motherhood. The following is an edited transcript of Westervelt’s conversation with Marketplace’s Amy Scott.

Amy Scott: You opened the book with a personal anecdote. I’m wondering if you could just read the first three lines of Chapter 1, which, I should say, is called “Being a Mother Shouldn’t Suck.”

Amy Westervelt: OK, here you go. “I am writing this book hip deep in the chaos that is modern American motherhood. My children are young, 2 and 5, my bills are high, and my career is in an industry that is a uniquely bad fit for parents: journalism. In the course of my research, my bank account has been overdrawn half a dozen times, I’ve lost health insurance and then managed to get it again. And I’ve had my car repossessed. I’ve had to find new child care arrangements twice and threatened to divorce my husband at least as many times.

Scott: That kind of says it all right there. But talk about how your personal experiences with motherhood kind of influenced the decision to write this book.

Westervelt: I had this experience with my second kid, who was very unplanned. At the time, my husband was not working and I was self-employed as a freelance journalist. I took off an afternoon to have a baby, and then I was right back at it and I was filing stories the next day. I remember feeling like kind of self-righteous, a little bit, like, “Yes, I’m doing everything, and no one even knew I had a baby! I’m supporting a family of four and, like, look at me!” And then I realize how really messed up that was. So that kind of led to me wanting to dig into how a lot of our ideas about motherhood in the U.S. came about.

Scott: You offer a lot of solutions in the book, which I found helpful, and something that came up a lot is the need to kind of reframe how we think about caregiving, to value it as much as we value individual success.

Westervelt: I’m not the first person to point out that our culture largely thrives on competition and not caregiving. But I do feel like giving real value to it, not just cultural and social value, but also actual monetary value, is necessary. A lot of what I’m reading anyway is saying, “We need men to do more, we need men to be more involved.” But why would anyone want to take on a task that is not valued? I feel like even when you outsource caregiving, it’s usually to an underpaid woman. What message is that sending about how we value that task?

Scott: Well, I also wonder if we would value motherhood and caregiving more if we valued children more. Is that part of the story?

Westervelt: Yeah. There’s like this odd way in which, as sort of a commodity, we value children, you know? But there has come this idea that kids are a burden, which has been happening since kids were not allowed to work.

Scott: They’re more valuable when they could contribute to the bottom line?

Westervelt: Yeah, in the early 1900s as the Industrial Revolution was getting underway, quite a few of the factory workers were women and children. At that time, custody battles were fairly rare, but when they did happen, children were always given to the father because they had economic value.

Westervelt: As soon as labor laws kicked kids out of the workplace, it was like, “Oh, give them to the mother.”

Scott: You talk in the book a lot about how different racial and ethnic groups balance work and family differently and how the Anglo-American concept of parenting, sort of viewing children as the sole purview of the parents, has been kind of destructive. Tell me about how American motherhood is affected by those cultural differences.

Westervelt: A lot of what gets talked about as American motherhood is really the modern version of what started out as a colonial Puritan motherhood. It often doesn’t include a lot of the various racial and ethnic groups that we have in this country who don’t approach motherhood this way. But for the Puritans, it was very much the family as the purview, really, actually, at that time, of the father. It was his responsibility to make sure that everyone kind of like stayed in line. But they were far away from extended families, so to the extent that any sort of extended network may have existed for them before was gone when they came to the U.S. Then it continued that way once they got here. And we didn’t invent the nuclear family, but we definitely, like, really doubled down on it. And that kind of bleeds into a lot of our ideas about what the government should or shouldn’t do to support families because we have this very persistent idea that it’s really only the biological parents that should be in charge of kids.

Westervelt: Yeah, I wanted to try not to look wistfully at Sweden in this book.

Scott: Because everyone looks wistfully at Sweden?

Westervelt: Right, they do. And for good reason — they have amazing policies. But my kind of take on it was that those policies are great, and they work really well in a in a socialist democracy, but in a capitalist system that’s very patriarchal, there are a lot of cultural things that might be obstacles to those policies actually working well. And so I was doing some research and I happened upon some information about what they had done in Japan. And it totally failed because, you know, you had bosses who had not had parental leave or any kind of a flexible work schedule. And they we’re not really into their employees taking advantage of these policies. And then you also just had like a general cultural mindset that men should be at work and women should be at home. And so they they had to kind of go back to the drawing board and look at what they could do to shift the cultural ideas and enable these policies to work.

Scott: And we’ve seen that here too in companies that do have equal parental leave. Men often don’t take it, and that ends up sort of penalizing the women who do. I remember getting mad at one of my male colleagues for not taking his paternity leave.

Westervelt: Yeah, because women sort of have to take it for physical recovery time, as well as bonding or whatever. But it also sets up this hugely gendered division of labor in the home. The mom ends up being the one that knows the feeding schedule, and the nap schedule, and all of those things. And she’s the one that gets used to parenting on her own from the beginning and all these things that then set up this dynamic where the mom is the primary parent.

Scott: One of your policy fixes is to get more working moms into government. And this past election, we did see an influx of successful women candidates for public office. What do you think that could mean for some of the solutions that you propose?

Westervelt: You can’t, of course, assume that every woman or every mother is going to have the same ideas about policy. But I do feel like having working moms in office who know what it’s like will have a little bit more insight into what’s needed to improve it. A lot of the politicians right now, if they do have young kids, which most of them don’t, they often have a spouse at home who takes care of all of the child care and housework stuff. And that is super unusual these days. But yet, we have so many systems in place that actually just assume that that’s the family you have. I have a kid in school, and I swear the whole public school system assumes one parent is just always available.

Westervelt: To bake, yeah, or show up in the middle of the day. Exactly.