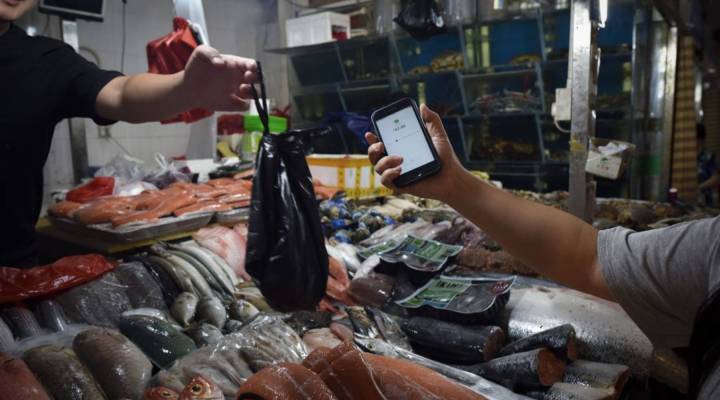 COPY
A man making purchases through his smartphone at a seafood booth at a market in Beijing, June 2017. WANG ZHAO/AFP/Getty Images)

A man making purchases through his smartphone at a seafood booth at a market in Beijing, June 2017. WANG ZHAO/AFP/Getty Images)
Listen Now

American Express is at long last getting into China. It faces an uphill battle, says Martin Chorzempa a research fellow at the Peterson Institute for International Economics. The Chinese market isn’t always friendly to western companies looking to expand, and besides, how many consumers there actually need a new credit card? Chorzempa came on to talk with us about it. Below is an edited transcript of their conversation.

David Brancaccio: All right, so Amex in China. This didn’t happen overnight did it?

Martin Chorzempa: It did not. China promised to open up its markets to Western credit card companies in the mid 2000s, and it’s been a long struggle of negotiations between the U.S. and China.

Brancaccio: So how did Amex in the end crack it? What was the condition?

Chorzempa: Well one of the key conditions is that it came on with a joint venture partner, so it’ll be sharing the profits, the technology and the business strategy with local Chinese company. Companies that have tried to go in alone and China has so far not received any any opening.

Brancaccio: But Amex in a market that big, this has to be a watershed moment. Do you see it that way?

Chorzempa: I don’t. Because, you know, I’ve been looking at payments in China for quite a few years, but all it would take you is one day seeing how people pay for things in Beijing to know that this is too little too late. Because they promised us a long time ago when there was a huge undeveloped market, but that’s over now. You know, that old Capital One commercial, “what’s in your wallet?” A Chinese person would answer ‘what’s in your wallet? with “I have no idea. I haven’t used my wallet in months.” Chinese people pay for everything with their phones. And it’s too little because this announcement only allows them to set up a business in China. It’s still going to take them probably about a year before we know whether they actually have permission to operate.