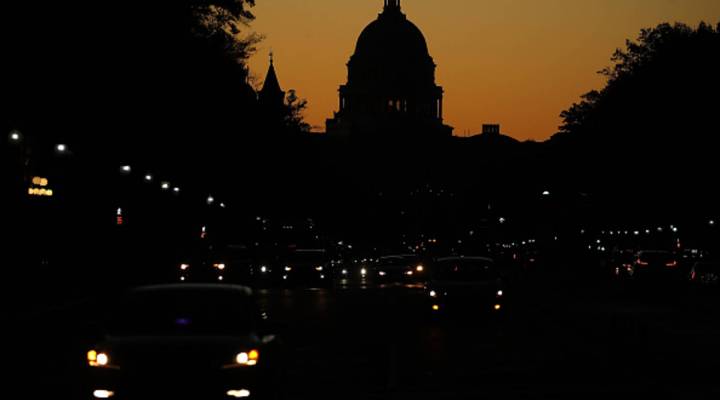 COPY
The sun begins to rise behind the Capitol a day after Americans voted in the midterm elections, on Nov. 7, 2018 in Washington, D.C. Democrats have won control of the House of Representatives while the Senate remains in Republican control. Mark Wilson/Getty Images

The sun begins to rise behind the Capitol a day after Americans voted in the midterm elections, on Nov. 7, 2018 in Washington, D.C. Democrats have won control of the House of Representatives while the Senate remains in Republican control. Mark Wilson/Getty Images
Listen Now

While health care and immigration dominated the midterm elections, the newly configured Congress — with a Democratic majority in the House and gains for the GOP in the Senate — will also turn their attention to trade. After months of NAFTA negotiations and an ongoing trade dispute with China, what will shifts in the U.S. political landscape mean for foreign policy and trade? For more on this, Marketplace Morning Report’s David Brancaccio spoke with Ian Bremmer, president and founder of the Eurasia Group, a global risk research and consulting firm. Below is an edited transcript of their conversation

David Brancaccio: All right, let’s go through some possible effects. Under fast track authority both the House and Senate have to approve treaties. What happens to let’s say the NAFTA overhaul, this USMCA, they call it?

Ian Bremmer: Because it’s a tweak and because so many in the House … would be negatively impacted if it blows up, because of major trade with both the Canadians and the Mexican supply chain and the rest, I actually think that this is going to be un-impacted by the elections and Trump will end up with a small but significant trade win.

Brancaccio: Does it affect the trade war with China?

Bremmer: There it does. And it’s not so much what the House can do in foreign policy, it’s more that to the extent that Trump feels increasingly besieged at home with all of the investigations coming against him and a harder time driving the narrative on what we’re talking about, what the headlines are. We know that Trump responds to that only one way, which is escalation and it’s harder to contain him and certainly to the extent that he’s looking for enemies, China is one of those places. I don’t think that has a big impact on the big upcoming meeting Trump’s going to have which [Chinese president] Xi Jinping in Argentina at the end of November. But I think that potential stickiness of any outline agreement between the two leaders is going to be under more threat as a consequence of the challenges Trump’s going to have at home.

Brancaccio: Now here’s something that you think a lot about, the U.S. shift away from international institutions under Trump and what was a Republican congress shift away from the U.N., the World Trade Organization. How do these election results play out with that in mind?

Bremmer: David, the interesting thing about foreign policy is that the foreign policy establishment in the United States, Democrat and Republican, they’re pretty coherent and they’re both really unhappy with all of the things Trump’s been doing internationally in that regard. So whether it’s the pullout of the U.S. from the Paris Climate Accord or the move of the embassy to Jerusalem, I mean even the Iranian deal, frankly at the end of the day most of the foreign policy establishment would have wanted to have more stability of U.S. leadership in big multilateral agreements and architecture. So Trump’s decision to move away, he’s brought Republicans with him kind of reluctantly because they don’t want to go after him. But it’s really been him, it’s been a more unilateral approach. And I don’t think this shift in the House is going to change that all that much, especially with him having picked up seats in the Senate that he helped campaign for. The Senate is going to be a bulwark for him.

Brancaccio: All right, now a divided Congress, this is being seen this morning as a test of whether the leaders of this new Congress can find some, any, maybe common ground. Ian, I don’t turn to you for Pollyanna quotes about politicians embracing each other in a public spirited sense of bipartisanship. You’re a realpolitik man. But might the House and Senate now work together on something?

Bremmer: No. I mean I really do believe that the level of division in the United States comes through very strongly with what just happened. Republicans doing better in rural areas, doing worse in suburbs. More of the pro-Trump Republicans succeeding, more of the stronger progressive Democrats succeeding. And the two parties that look increasingly broken and a lot of anti-establishment sentiment in both sides, I think 2020 looks really fractious and to the extent that Trump wants to get things done, like Obama, is going to be going to executive order.