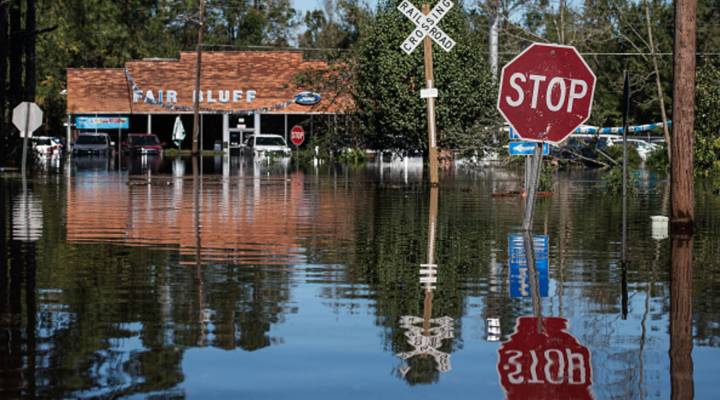 COPY
A roadway is flooded by remnants of Hurricane Matthew on Oct. 11, 2016 in Fair Bluff, North Carolina. The town was devastated again by Hurricane Florence in 2018.

A roadway is flooded by remnants of Hurricane Matthew on Oct. 11, 2016 in Fair Bluff, North Carolina. The town was devastated again by Hurricane Florence in 2018.
Listen Now

The Atlantic hurricane season officially has a few more weeks to go, but already this year has been deadly and destructive. The mainland U.S. took a hit from Hurricane Michael in October and Hurricane Florence the month before.

Florence devastated many parts of North Carolina, including areas far from the coast. For many small communities, it was the second or even third disaster in just a few years. The tiny town of Fair Bluff —about 70 miles west of Wilmington — was among them.

For decades, Randy Britt and his family have run adjacent hardware and clothing shops in the historic downtown. It’s a typical small-town commercial district, with storefronts lining both sides of a main street. But in this case, those storefronts are empty because the nearby Lumber River has flooded twice in two years, most recently because of Hurricane Florence.

For weeks, Britt has left the doors open and blown air through with industrial-sized fans, but the shops still smell moldy. He’s cleaned out most of the silty mud, a chore that he’s becoming an expert at.

“It leaves this slime, a black slime” he said. “And when that dries, it keeps creating dust.”

Hurricane Matthew struck in 2016, forcing the 15 or so shops along Main Street to close, including Britt’s. Fair Bluff  struggled for two years as local officials worked with state and federal agencies on recovery plans for various parts of the town, including residential areas that a were badly damaged. About five stores were able to reopen. And then Florence hit. They all closed again.

Britt is trying to make ends meet selling and servicing power equipment, like chainsaws, out of a small back room. In the main part of the hardware store, dirty packets of hinges and screws still hang.

“When you come in here in the morning, you see that steam that’s drying out on the windows now?” he said. “It’s a hot slimy feeling. I mean it’s just terrible.”

Britt, 71, has lived here his whole life. He remembers the hopeless feeling when the only bank closed five years ago, part of the town’s long slide before all the storms, as its population fell from about 1,200 to roughly 900. The town had been a center for tobacco auctions, which powered its economy, but that ended more than a decade ago after the tobacco industry changed the way its product is sold.

And now, in just two years, Britt’s shops, plus the only other hardware store, the only appliance and furniture store, the only pharmacy, the only doctor’s office, have all closed. Britt’s customers now have to drive 12 miles for a drill bit or a box of nails.

“It’s like dividing your life up on a line here, and cutting out percentages of it as these things leave,” he said. “You just cut a section of your heart out.

According to FEMA, nearly 40 percent of small businesses never reopen after a disaster, and many that do reopen fail within a year. But the statistics don’t convey what it means when businesses that a small town relies on, that are woven into its social fabric, are hit by floods just a few years apart.

In Fair Bluff, there’s talk of bulldozing downtown and moving it to higher ground, perhaps with state funding. Mayor Billy Hammond says it’s unclear what the chances are for getting the money it would take, but the idea is worth considering if the town is to survive.

“Younger people are not going to come into town and make a commitment to build a new home or a new store in a floodplain,” he said.

“For the downtown area, if we could get one or two businesses to move to higher ground, I think people would follow,” he said. “And hopefully that’s what would bring a younger generation of people, who would have to come in and build the buildings and make the long-term commitment to be here to profit from it, and move forward.”

Britt, who blames climate change for the floods, says that might be the only solution that makes sense, because “this is probably going to happen again. I’m convinced now. Weather patterns have changed.”

But if the relocation happens Britt wouldn’t be going with it. He says he is too old to start over, though he might help someone younger shift the business to the new spot.

But he doesn’t know of anyone who might be interested. His business was doing little more than paying its bills even before the storms. Even as the population dwindled, Britt was determined to stay open. He was providing a service to his neighbors.

That feeling is common in declining small towns, says Steven Conn, a historian at Miami University in Oxford, Ohio who studies American cities.

“A lot of these small businesses in these communities I think don’t see themselves entirely as a profit-making enterprise, as they balance that against that sense of community cohesion,” Conn said. “That these places they’re run by people in the community, they’re run for people in the community. And I think the psychological traumas are at least as important here as the economic bottom lines and some of these decisions. It’s one thing for a corporate manager in some faraway place to makes a decision about closing a store but when you live in this town and it’s your neighbors who are going to be affected or going to be laid off or are not going to be able to do their grocery shopping the pain is much harder.”

Given the value of small businesses to communities like Fair Bluff, he said, the federal government should consider doing more to help the owners decide to reopen, and improve their chances of staying open, after such disasters.

“If what people want to do was hold onto local economies — because it isn’t just about buying groceries it’s about all the parts of the fabric of a community — then there are probably some ways that we could think about that could make that choice a little less daunting for that small business owner,” he said.

“We could be thinking more broadly about how we help small businesses stabilize and survive,” he said. “Not to subsidize them forever, but at least until the community kind of rights itself after a traumatic event like this hurricane.”