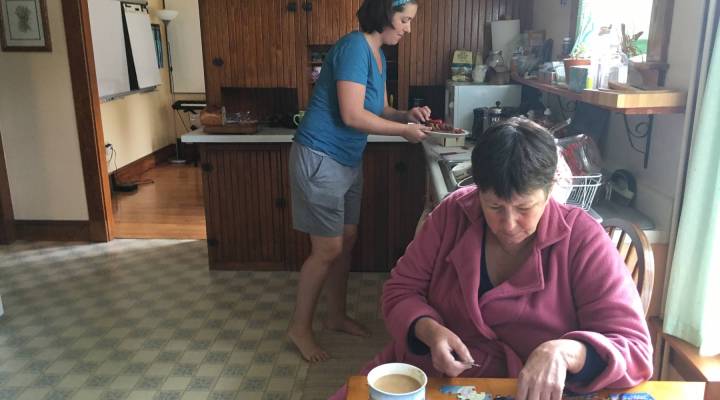 COPY
Jessica Browne prepares a plate of French toast for her mom, who works on a puzzle in their kitchen.   Patty Wight for Marketplace

Jessica Browne prepares a plate of French toast for her mom, who works on a puzzle in their kitchen.   Patty Wight for Marketplace
Listen Now

This election, voters in Maine will decide whether they want to tax higher income earners to create a universal home care program for seniors and people with disabilities. The cost of long-term care is a challenge for seniors across the country, and it’s particularly acute in Maine, one of three states where 19 percent  of the population is 65 and older, and that number is expected to grow to a quarter of the state’s population in the next decade.

Jessica Browne cares for her 63-year-old mother with dementia around the clock. As the washing machine spins the first load of the morning, Browne has already helped her mom bathe, go to the bathroom, and get dressed. Browne rearranged her life three years ago to do this. She left a teaching job and now tutors part time out of the house she shares with her mom. It’s a sacrifice that she feels is important for her to make, but she worries how long she can sustain it — financially and emotionally. “I don’t want to be left alone with this, ya know? It’s probably the hardest thing I’ve ever done.”

Browne supports a ballot initiative that, if approved by Maine voters, would establish a free home care program to help people like her. It would be available to all state residents and funded by a 3.8 percent tax on adjusted gross incomes above $128,400. That tax would generate more than $300 million a year. But Newell Augur, the chair of the group that opposes the proposal, says the tax would give Maine one of the highest state income taxes in the nation. And it could hurt business owners who are required to report business income on their personal tax returns. “The idea that we’re going to hit 60,000 Maine families and an untold number of small businesses is just going to be a disaster for our economy.”

The ballot measure would create a board to oversee the home care program, and that board would oversee training and ensure higher pay for in-home care workers. It’s a workforce in short supply, says Jessica Maurer of the Maine Council on Aging, which is neutral on the ballot initiative. She says that shortage will likely get worse as the number of older people grows. “And so as a result of that, many of us will need care, and it will be difficult for us to find the care providers that we need.”

The cost of long-term care is also an issue. Nursing homes can charge upwards of $100,000 a year. Home care for about 40 hours a week costs half as much. The question nationwide, says David Grabowski, a professor of health care policy at Harvard Medical School, is who can pick up the tab? “Are these older individuals going to have the money to pay for care? If not, can state Medicaid programs provide that care?”

Currently, Grabowski says, Medicaid pays about two-thirds of the cost of nursing home care in the U.S.