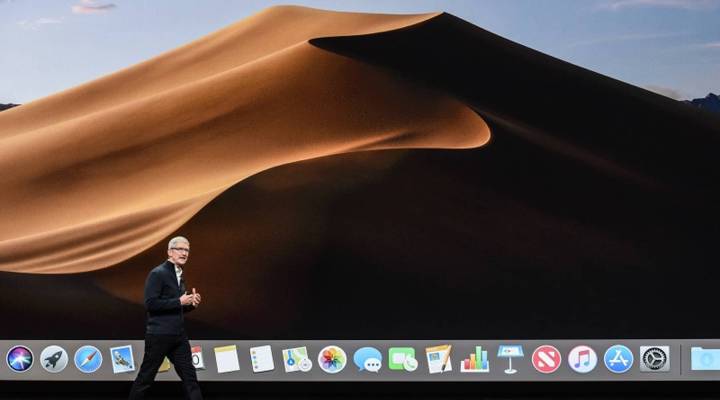 COPY
Tim Cook, CEO of Apple, unveils new products during an Apple launch event at the Brooklyn Academy of Music in New York on Oct. 30. The new products cost about 20 percent more than the previous generation. Photo by Stephanie Keith/Getty Images

Tim Cook, CEO of Apple, unveils new products during an Apple launch event at the Brooklyn Academy of Music in New York on Oct. 30. The new products cost about 20 percent more than the previous generation. Photo by Stephanie Keith/Getty Images
Listen Now

Starting with the iPhone X, which crossed the $1,000 mark, Apple has been consistently raising prices throughout its product line. New versions of iPads and MacBook computers announced in Brooklyn, New York, this week all cost more than the generation they are replacing — around 20 percent more.

Apple has managed to make its products seem indispensable to its loyal customers, and those customers have, so far, appeared willing to pay more.

“Apple has a formula for becoming a fabric of our daily lives through creating innovative products that enhance our ability to communicate and create and consume,” said senior research analyst Mike Olson with Piper Jaffray.

Loyalty is one reason for Apple’s aggressive pricing strategy.

“Apple’s hardware business and iPhone business is one of, if not the only, sort of recurring hardware models on the planet,” said UBS analyst Timothy Arcuri. “The replacement product for an iPhone is an iPhone, and the only question is when.”

There are also some tangible reasons why Apple products are getting more expensive, according to the company. It keeps adding more advanced features, like more powerful chips.

Plus, people are keeping their devices longer, so in a sense Apple is replacing volume with price.

And while Apple has a range of pricing tiers for its devices, the company has perfected the marketing strategy of pushing people to its highest-end products.

“I’m an economist, and I’m a pretty thrifty person, and even I bought the XS Max,” said Rafi Mohammed, pricing strategy consultant. He recently purchased one of Apple’s newer iPhones. It sells for a starting price of around $1,100.

But even Apple has to accept that there are limits to how much consumers will spend, said Olson at Piper Jaffray.

“We did a survey of 1,500 iPhone owners who said they did not upgrade to the iPhone X, and 31 percent of them said the reason they did not was it’s too expensive,” said Olson. That’s proof that not everyone is willing to pay more for an iPhone just because it’s an iPhone, Olson said.