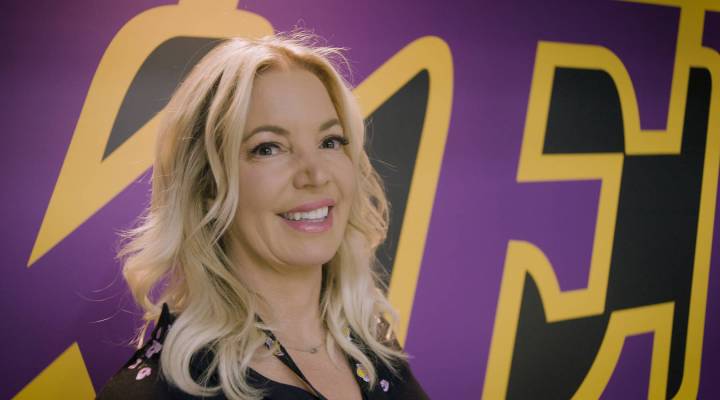 The Los Angeles Lakers are more than just a basketball team. They are also a company worth $3.3 billion, a global brand, and one of the most successful franchises in the NBA. Fundamentally, the Lakers are an entertainment company with outsized influence.

Lately though, the team has struggled to deliver on the court. The Lakers have missed the playoffs five years in a row, and this year’s season is off to a slow start. They’re currently ranked 11th in the NBA’s Western Conference.

Jeanie Buss, CEO and co-owner of the Los Angeles Lakers, is at the heart of this organization. Her family has owned the team since 1979. She joined the family business at age 19 and took over for her father, Jerry Buss, when he died in 2013. She talked with Marketplace host Kai Ryssdal and showed him around the Lakers’ new headquarters in El Segundo, California.

The Lakers moved into the UCLA Health Training Center just over a year ago. Unlike the old facility, this one has business and basketball operations under one roof, which Buss said was part of the design strategy.

Jeanie Buss: The architects that we ended up choosing talked about how architecture could change culture in an organization, and that was exactly what we were looking to do. Back in 2012, we had a player by the name of Dwight Howard that played on the Lakers. And we were at our old facility, and he came up to my office and he said, “Can I ask you something?” And I said, “Sure.” And he goes, “Where are all the people that work here?” And it was then I realized that it was important for them to know how we operate behind the scenes. And so this building is a walkable building. There’s no barriers … you can make a full circle without having to divert through anything or being stopped.

Investing in this new facility is one of several changes Buss has made in recent years trying to get the Lakers back on top. Last year, she fired her brother, Jim Buss, and put former Lakers superstar, Magic Johnson, in charge of basketball operations.

Jeanie Buss: When my father passed away, then [NBA] Commissioner David Stern called me, and he said, “Jeanie, don’t let the team fail. Like, don’t run it into the ground. It would break your dad’s heart.”

Kai Ryssdal: Did he really say that?

Buss: And it was difficult, because I wasn’t in charge of basketball, my brother was. And I asked him, “How long is it going to take you to get the team on track?” And he gave himself a timeline, which, you know, as time went on, I realized it wasn’t going to happen, and that’s why I had to make the change that I did. But I, you know, I took that to heart and I wouldn’t let this — you know, I think you know my dad had six kids. I think the Lakers were his favorite kid.

Buss said though it was a difficult decision to fire her brother, she realized the uncertainty he caused by switching coaches several times was “killing the brand.”

Ryssdal: A word here about your family — I mean, Dr. Buss, your dad, Jim, your brother who you worked with and then and then had to replace — you talk about it a lot. You talked about it in your book, you’ve talked about it in interviews, about how this is a family business. So those first couple of years, when the commissioner calls you and says, “Don’t blow it with the family business,” and then you have to fire your brother, what’s that like?

Buss: It was very, very difficult. You know, my dad kind of set it up for us, but ultimately, he gave me the authority and the power to make any changes that I saw necessary. One of the key components of that decision-making process was a conversation I had with Kobe Bryant a few months before. He said, “Any player who is a winner is going to look at an organization and how it operates and making sure that there’s somebody in charge who has authority to accomplish what the goals are.” Meaning, you’ve got to get the organization in the right position before anybody will consider investing his career in what you’re doing. You have to have the right message, and right now nobody knows what you guys stand for.”

In the time since Buss replaced her brother with Johnson, the Lakers have signed LeBron James, the best basketball player in the NBA right now. Buss said having James has elevated the Lakers’ brand. “Now we just need to do that on the court,” she said.