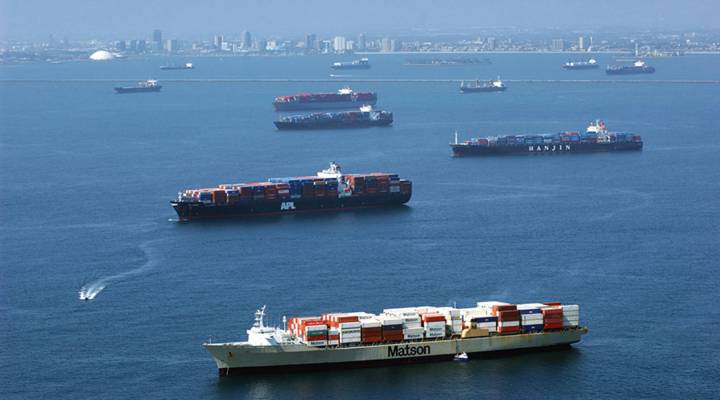 COPY
Half of everything China sends to the United State is subject to tariffs. Above, container ships outside of the ports of Los Angeles and Long Beach. David McNew/Getty Images
Trade showdown

Half of everything China sends to the United State is subject to tariffs. Above, container ships outside of the ports of Los Angeles and Long Beach. David McNew/Getty Images
Listen Now

On the trade front, the United States is either in a war with the rest of the world or just about there. The list of U.S. goods subject to foreign tariffs includes sorghum, soybeans, cars and most of what we ship to China. On the import side, foreign steel, solar panels and washing machines are subject to U.S. tariffs, plus half of everything China sends here.

All this has happened in less than a year, so you might think we can get out of this fight as quickly as we got in.

But a school of academic thought known as game theory suggests this trade war could go on a very long time.

Game theory is a way scientists and mathematicians think about human behavior and interaction. What should I do, based on what you do? Should I trust you? And what do I do if you break that trust?

Before this trade war, the United States and China had trust. Both were members of a free-trade club known as the World Trade Organization.

Then trust broke down. Trade professor Jennifer Hillman at Georgetown Law said a decade ago, Beijing began requiring U.S. companies there to hand over their trade secrets.

“Their forced technology transfer violates the commitments China made when it joined the WTO. That its level of IP theft is a violation of the intellectual property provisions,” she said.

“Under the WTO rules, the United States is not allowed to unilaterally just ratchet up the tariffs on China,” she said.

Game theory suggests a couple things. One is it’s hard to establish trust when it’s broken.

And two, a trade war is a rational thing for countries to do. It’s in their self-interest.

“If China imposes tariffs, the U.S.’s best response is we’ll tax your imports as well,” he said. “If China doesn’t, then the best response of the U.S. is also to say, ‘Well, they’re not doing anything. Let me sort of collect from them.'”

Now, if you think game theory is just a theory, you’re taking on Nobel economist John Nash — he helped develop this. (He was also portrayed by Russell Crowe in the film “A Beautiful Mind.”)

He came up with something called the Nash equilibrium, which suggests a trade war is the norm, the stable state of things.

“Both countries imposing tariffs is the Nash equilibrium of the game,” Sundararajan said.

That means this trade war could go on a while, perhaps a decade or more.

Now, game theory does allow for things to get shaken up. But it takes something dramatic to disrupt things — say, political change.

“Could be the election of a new president in the United States,” Sundararajan said. “Now that, unfortunately, has to be coupled with a similar willingness to negotiate on China’s part.”

Or outside parties — say, other countries or the WTO — could bring the United States and China together and create space for trust, said Georgetown Law’s Hillman. They could facilitate a new trade agreement that takes away tariffs and provides new customers for exports.

“So it’s giving a little bit of political cover to China to say we need to make these reforms. In order to remain a member in good standing of the WTO, we need to do these reforms,” she said.

And it provides political cover for Washington, D.C. as well.

But Hillman agrees with Sundararajan that a sudden outbreak of trust is not imminent. And that this trade war, as game theory suggests, could go on awhile.