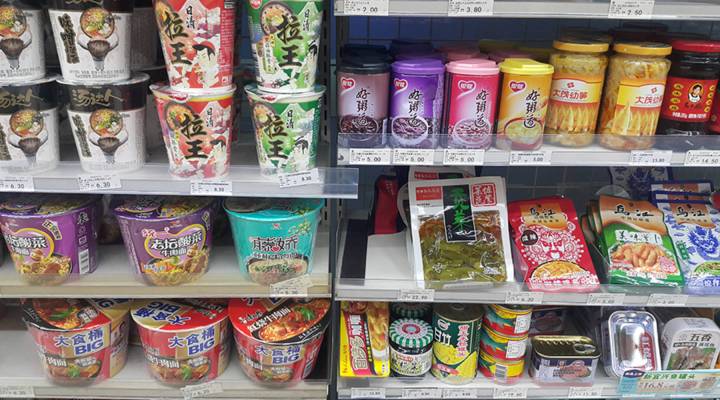 COPY
The success of firms selling instant noodles and pickled mustard greens have fueled a perception among Chinese citizens that the country is on a “consumption downgrade.” Jennifer Pak/Marketplace

The success of firms selling instant noodles and pickled mustard greens have fueled a perception among Chinese citizens that the country is on a “consumption downgrade.” Jennifer Pak/Marketplace
Listen Now

Douglas Yan, 30, is exactly what China’s economy needs — a spender.

Or rather, a spender like he used to be.

He works as an information technology supervisor for a Danish company located an hour’s drive from Shanghai. For years, the job has paid him well enough to splurge on online purchases.

Yan estimates he spent at least $14,000 last year on that one e-commerce platform alone.

These days though, he thinks twice before buying.

“Now I just buy stuff that I need and only if it’s on sale,” he said.

Yan is focusing on necessities like furnishings for a new apartment and insurance for his family. That spending on basics leaves him with less money to splurge on other things.

He describes his situation as a “consumption downgrade.”

“It’s like if I bought an iPhone last year but now I can only afford to buy a cheaper Chinese brand, like Xiaomi,” he said.

On Friday, China announced that its economy grew at its slowest pace since the financial crisis in 2009 — 6.5 percent during the third quarter, amid an escalating trade dispute with the United States.

Yet, discussion about a consumption downgrade has been simmering since the summer.

Across China, the talk is about cutting back in big ways and small — from restaurants to fast food and from taxis to shared bicycles.

Douglas Yan and his family used to travel at least twice a year, but this year they haven’t traveled on vacation. He calls this a consumption downgrade.

China’s state-run media, CCTV, aired a program devoted to the topic back in September.

“There’s a popular saying on the internet these days: Pickled mustard greens for lunch, travel by [shared bicycle service] Mobike, drink [cheap grain alcohol by] Erguotou and buy products for 9.90 yuan ($1.40). The logic seems to be that our wallets are not getting any fatter, which means we can only afford cheap products, so our consumption is downgrading,” CCTV host Zhang Lin said in the introduction of the broadcast.

Discussion of a consumption downgrade appears to have heated up after shopping app called Pinduoduo, which gives group discounts on cheap groceries and goods, started to rival e-commerce giants like JD.com and Alibaba’s Taobao. Pinduoduo raised $1.6 billion in its initial public offering in New York over the summer.

Other firms selling low-end products like instant noodles and pickled mustard greens have reported soaring profits in the first half of this year. The success of firms selling cheap goods has fueled a perception among Chinese citizens that the country’s shoppers are becoming more frugal.

“I don’t think there is any significant evidence that this is a big macro story,” Nicholas Lardy with the Peterson Institute for International Economics in Washington said.

Government data show retail sales growing at a slower than expected pace in recent months, but Lardy said this is not an accurate reflection of consumption.

“Consumers are spending more of their income on education for their children, better medical care, tourism, recreation entertainment, and those kinds of expenditures don’t show up in the data on retail sales,” he said.

“The growth in wages [after inflation] is something close to 7 percent in recent years,” he said.

Plus, Lardy said households in China are saving a little less after-tax income than they did in the past.

“With incomes rising and the savings rate going down, that is a very powerful combination for sustaining a fairly strong growth of consumption,” he said.

Many economists agree with him.

There are a couple of theories as to why there is discussion about a consumption downgrade even when this trend is not showing up in the data.

Popular chat app WeChat shows the discussion about a consumption downgrade heated up on its platform over the summer months.

Lardy believes Chinese citizens may be picking up a larger narrative in the United States that China’s economy is slowing down.

“The argument of the [Trump] administration is that [China’s] economy was slowing before the tariffs went into effect, and the tariffs will be the crowning blow that will make China accede to U.S. demands on trade, investment and other issues,” Lardy said.

He does not think there is much evidence for this argument.

“In fact, I think the [Chinese] economy is continuing to chug along at a fairly strong pace,” Lardy said.

Others believe discussion about a consumption downgrade is rooted in rising property prices, forcing people to borrow more to pay for a home. Mortgages make up the bulk of China’s household debt.

“From 2008 to 2017, China’s ratio of household debt to GDP went from 18 to 50 percent. That is a 32 point increase in less than 10 years, whereas it took a few decades for that to happen in the U.S.,” Fu Yifu with the Suning Institute of Finance in Beijing said.

He is sympathetic to those who believe there is a consumption downgrade because he, too, is feeling the pressure.

“Living in China’s capital city is expensive. I often feel I don’t have enough spending money after my mortgage payment and taxes,” Fu said.

Fu Yifu and other analysts have written articles online on whether the consumption downgrade is real.

The government is so concerned by the discussion of a consumption downgrade that in September, a spokesperson from the Ministry of Commerce shot down the idea of such a trend and insisted that China continues to be experiencing a consumption upgrade.

China’s state-run media have echoed that same sentiment to ease people’s anxieties, because psychology plays a big role in consumption.

David Wilder, managing editor with Financial Times Confidential Research, said there are many challenges ahead. His firm has been surveying 1,000 consumers in China every month for the past seven years.

“What we have seen in the last few months is a shift from the desire to invest over saving, where consumption has actually held relatively flat. I think what it tells us is consumers are now getting nervous,” Wilder said.

He said consumers are nervous about China’s stock market taking a dive, the Chinese government reining in debt and the ongoing U.S.-China trade dispute.

“There is a sense that things have been very good for a couple of years, [but now] you have this perfect storm of internal and external factors,” Wilder said.