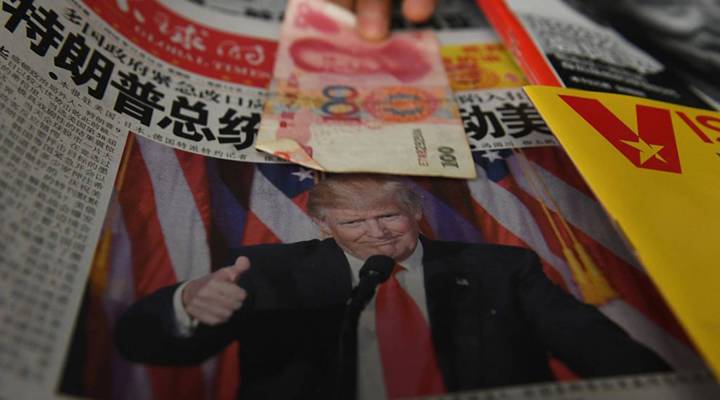 COPY
A vendor picks up a 100 yuan note above a newspaper featuring a photo of Donald Trump, at a news stand in Beijing on Nov. 10, 2016.  GREG BAKER/AFP/Getty Images
Economic Anxiety Index®

A vendor picks up a 100 yuan note above a newspaper featuring a photo of Donald Trump, at a news stand in Beijing on Nov. 10, 2016.  GREG BAKER/AFP/Getty Images
Listen Now

A majority of Americans believe the U.S. is in a trade war with other countries, according to the latest edition of the Marketplace-Edison Research poll.

As trade tensions with China increase, so too has the concern that the country could weaponize its large holdings of U.S. debt, selling its reserves suddenly in an attempt to destabilize the U.S. economy. China owns more U.S. treasury bonds than any other country — almost $1.2 trillion, a stockpile that has drawn attention well before the current trade tensions.

Secretary of State Hillary Clinton cited U.S. dependence on China during her presidential campaign in 2007, asking, “How do you get tough on your banker?”

But Mary Gallagher, director of the Center for Chinese Studies at the University of Michigan, thinks the notion of China as America’s banker is overblown, “both in terms of how much debt is actually owned and also whether or not there are alternative buyers.”

While China’s holdings are significant, they amount to less than 5 percent of the U.S. total debt. What’s more, the country hasn’t been adding much to its reserves in recent years.

Selling its current supply would be an aggressive move that China would not undertake unless provoked, said Wing Woo, an economic professor at the University of California-Davis. China wouldn’t instigate a sale “unless they are outraged by some American actions which they view as excessive,” he said. “A fire sale means that the price of bonds will be lower. The Chinese would suffer big capital losses.”

In the short term, as U.S. bond prices fell, their yields would increase. Those increases would likely increase interest rates on many of types of loans.

But longer term, “the Federal Reserve has all the tools needed to limit the damage that China could cause through sales,” said Brad Setser, a senior fellow at the Council on Foreign Relations.

While the Fed currently plans to gradually raise interest rates, it could alter its plans to offset any fallout from Chinese bond sales.

“That’s why I am much more worried about the risk that China might conclude that it just wants a weaker currency and try to respond to tariffs in that way,” Setser said.

Allowing the Chinese currency to depreciate against the dollar would make its goods cheaper globally, which Setser said would be much more disruptive and much harder for the U.S. to counteract.