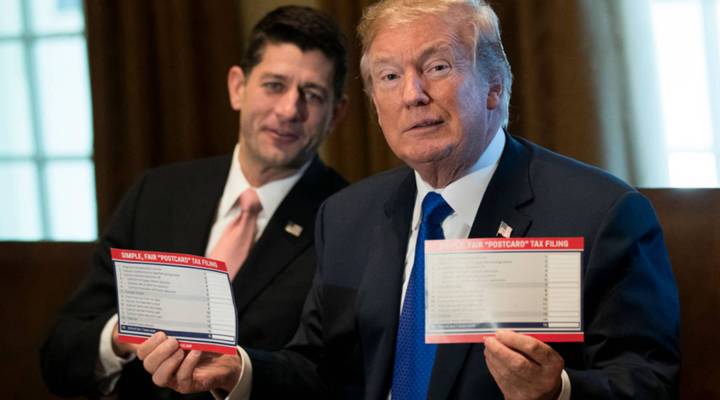 When it comes to the new tax law, lots of people just aren’t feelin’ it

When it comes to the new tax law, lots of people just aren’t feelin’ it

You could say Karen Schindler noticed when the tax law went into effect this year.

“I was sort of joking with my mom about, ‘Oh, I got a raise’!” Schindler said. A raise of about $10 a week. Schindler is a sales manager for a furniture company in Florida, making $65,000 a year.

“So it wasn’t a huge increase,” she said.

Schindler is among the 80 percent of Americans getting a tax cut under the new law, according to estimates from the Tax Policy Center. She’s also among a big group of people who said the tax cuts haven’t made much of a difference in their financial lives. In a new Marketplace-Edison Research poll, more than half of respondents said the new tax law hasn’t had an impact on them personally.

Prajesh Kondaskar, who lives in Houston, said the tax cut added about $40 a week to his paycheck.

“It was not something where it was kind of like a big change in your financial situation,” said Kondaskar, who earns a high salary as a civil engineer.

And, to be fair, he didn’t expect it to be. Although 42 percent of the people in the Marketplace poll said they don’t understand how the tax law affects them, Kondaskar was pretty clear.

“I kind of knew the law was more for big corporations to get the big tax cuts,” he said.

That perception is one reason the Republican National Committee admitted recently it had “lost the messaging battle” on the tax cuts. As the midterms approach, few ads for GOP candidates even mention the tax law.

But William McInnis doesn’t need to be sold on the tax cuts. He has an extra $45 in his paycheck every couple of weeks. McInnis works at a wastewater treatment plant in Nevada and said he’s using the money to pay off his credit card.

“It takes time,” McInnis said. “But every little bit helps.”

McInnis said he’s been a Republican for a long time, but he’d been thinking about switching to Independent. Then came the new tax law.

“Since then I’ve decided to stick with them a little longer,” he said.

There’s one return on the GOP tax cut.