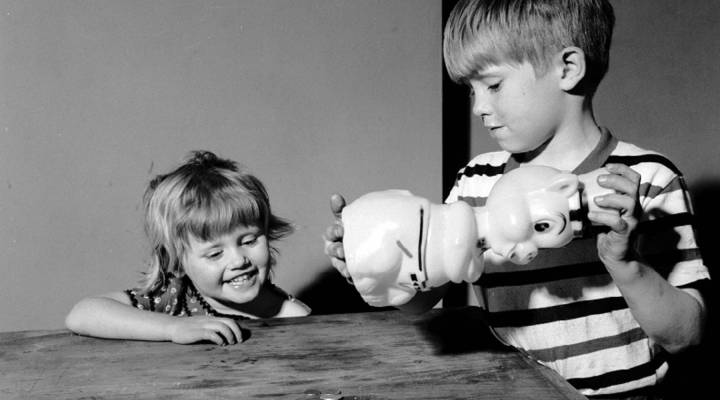 Since 2015, Marketplace and Edison Research have been tracking how Americans experience daily economic stress. It’s called the Anxiety Index, and it takes into account factors such as job security, life expenses or even fear of a possible recession. The 2018 edition of the poll has some geopolitical flavor, as the tariff odyssey among the United States, China and other nations played a part into how people responded to the survey. Marketplace’s Tracey Samuelson spoke to Edison Research President Larry Rosin about some of the other trends the survey shows.

Larry Rosin: Very good, I would say. It’s the lowest level of anxiety that we’ve gotten in any of our surveys that we’ve been tracking since 2015. If you go back to what sort of founded this, is there was all this data that seemed to conflict … the government saying that the economy was really improving and things were getting better, and yet there wasn’t a strong sense among individuals that their personal economies were getting better. So we created this series to try to square that. So we created the anxiety index back in 2015, and we’ve been tracking it since then. We watched it spike dramatically as the election approached, and that could have been the result of generalized economic problems, maybe the election itself was making people anxious. And it’s been coming down ever since Election Day in 2016. This most recent update here in October, it’s the lowest we’ve seen since we started the series.

Samuelson: So, anxiety low, and yet people are worried about a potential recession.

Rosin: We found a majority of our respondents, despite saying it was the lowest level of anxiety that we’ve recorded, expect a recession in the next year. And it’s hard to parse necessarily why they feel that way. I think part of it has to be that the overwhelming majority of our respondents, of course, lived through the global economic crisis of ’07 through ’09. And I think there’s a long-term scarring effect just as was always recorded from people who lived through the Depression, and they always lived with the concern that that might happen again, as well as it’s just been a really long time. I think many people are aware that there is a natural interval to these recessions, and normally that interval would have been triggered by now and it hasn’t happened yet. So maybe there’s a building-up feeling of, “Well, it has to happen eventually,” the sort of “balloons pop at least to some degree.”

Samuelson: So despite all of the headlines and attention paid to the ongoing trade war, this is not really a big issue for people?

Rosin: Not when compared to other things. The survey is about people’s personal economy. And some people definitely said trade was a very important issue to them, but well behind other things like health care and immigration. And so at least as of yet, whatever problems or issues that the trade stories that are out there are causing seemingly hasn’t trickled down to that many individuals such that they’re telling us it’s affecting their lives. That doesn’t mean it might not in the future. And certainly there’s a lot of prediction that will happen, but not yet.

Samuelson: People told you they’re really not noticing this in their everyday lives in terms of prices or impact?

Rosin: Not yet, and it will be very interesting to see as we continue to track this data over time if that starts to ripple through. Maybe it’s just simply too new and people don’t see generalized inflation or higher costs on things. Obviously, there are people who are individually very affected, but that’s clearly a small enough number that it doesn’t really show up in a big story in our survey.

Samuelson: Despite warning from economists and critics of the president’s trade policy that this is the downside to these tariffs, that it will raise prices and hurt consumers.

Rosin: Right, but we also asked a really interesting question, which was, “What’s more important: Having generally low prices or protecting U.S. jobs?” and people overwhelmingly said protecting U.S. jobs was more important than lower prices. And I do ask myself if this is an area where what an economist would say is good, which is “Hey, every American pays $100 less for all the goods they buy because the products at Walmart and Target are cheaper than they would be otherwise.” And that specific impact on someone whose factory closes in Wisconsin to reopen in Mexico. And so we have this generalized benefit of trade that lowers prices, but we have a lot of really specific impacts of trade, of people who lose their jobs, and I do wonder if economists sort of miss the difference in the way that affects people psychologically.

Samuelson: But I think the research would show that people say they’re willing to pay higher prices for goods, but when it comes to actually paying those higher prices in “buy America” campaigns, things like that, they might not actually follow through.

Rosin: Exactly. And so again, this could be a case where it just takes a little while for people to understand the influence of these things, where all of a sudden their paycheck isn’t going as far as they saw it was before, and they flip over maybe on this issue of protecting jobs versus lower prices.

Samuelson: And we also saw this kind of quasi-hierarchy maybe in terms of the priorities people had when it comes to tariffs. Tell me about that.

Rosin: Exactly. I think that’s a clear implication of the survey.