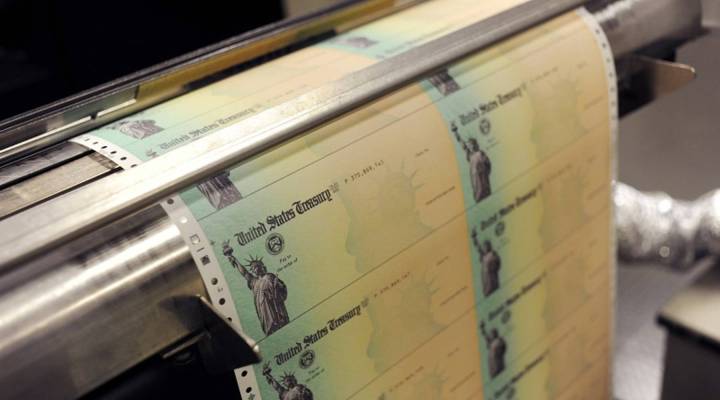 COPY
Blank checks run through a printer at the U.S. Treasury printing facility in Philadelphia in 2011.  Photo by William Thomas Cain/Getty Images

Blank checks run through a printer at the U.S. Treasury printing facility in Philadelphia in 2011.  Photo by William Thomas Cain/Getty Images
Listen Now

Retirees and other Americans who get Social Security benefits will start receiving bigger checks come January. The 2.8 percent boost, which amounts to about a $40-per-month increase on average, is intended to be a cost-of-living adjustment. This will be the biggest adjustment to Social Security payments in the past seven years. Marketplace spoke with a few of the estimated 67 million Americans receiving benefits about how the extra money will help.

Sixty-eight-year-old David Covington gets about $600 each month in Social Security benefits. He’ll tell it to you straight: Living in Cleveland, Ohio, in 2018 with health bills and a home in need of repair is difficult.

Covington said he’s thankful for the money he gets, but a 2.8 percent cost of living increase — heck, any increase — would make it easier for him to cover his daily costs.

“It would sure help to at least keep up with inflation,” he added. “Inflation’s going up outrageous.”

Economist Andrew Biggs with the conservative American Enterprise Institute said we had enjoyed a run of relatively low inflation, but policy shifts and then mother nature changed that.

“One reason for the increase in prices last year was the impact of hurricanes. Those tend to push up prices a bit and that can reverberate around the country, but then you get the usual increase in cost for food, for gasoline, for health care.”

Cheryl Moody, who’s 66 and lives in Las Vegas, said a small benefit increase every few years is not enough to keep up with her costs.

“Social Security should have a cost-of-living increase every year,” she said.

Moody lives with a roommate, spends about half of her $1,645 monthly payment on rent and expects rent to go up.

“If I didn’t have a roommate, I probably would not be able to get a one-bedroom apartment on my own.”

Joann Weed has been receiving Social Security benefits for six years. She’s 72 years old, lives in Orlando, Florida, and receives a little over $1,000 a month. Weed said she would use the extra money she gets for groceries, but she does not believe she’ll see real gain.

“I know how it’s going to come out. They’re going to raise the Medicare premiums, and we won’t get the 2.8 [percent].”

News on any Medicare hikes won’t be out until later this year.