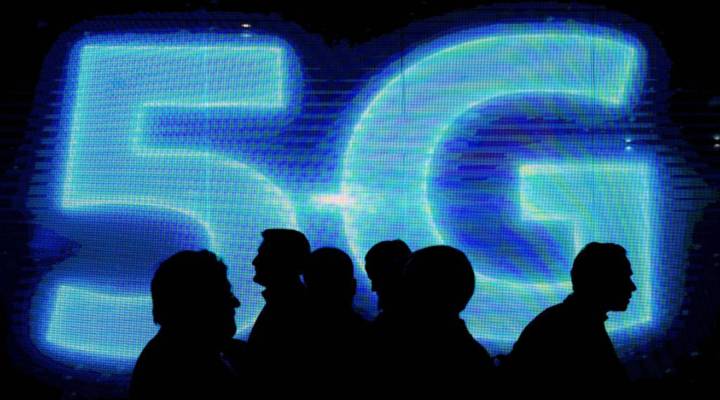 COPY
Visitors walk past a 5G logo during the Mobile World Congress on the third day of the MWC in Barcelona, on March 1, 2017. JOSEP LAGO/AFP/Getty Images
Marketplace Tech Blogs

Visitors walk past a 5G logo during the Mobile World Congress on the third day of the MWC in Barcelona, on March 1, 2017. JOSEP LAGO/AFP/Getty Images
Listen Now

The next generation of wireless technology, 5G, could be a huge deal. The speed — and the number of devices that can be connected — could spawn new businesses we haven’t even thought of yet. Last year chipmaker Qualcomm and tech research firm IHS Technology put out a report that said 5G could enable $12 trillion in economic output across the world by 2035 and add some 22 million jobs. The report compared 5G to no less than … electricity. Compare that to 4G, which, just in the U.S., contributed about half a trillion dollars to the economy in 2016. And even a whiff  of that potential is why there’s a race to get to 5G first between companies and countries. Scott Tong is a Marketplace reporter and former China correspondent. He tells Molly Wood that the U.S. was the 4G winner, and China doesn’t want that to happen again. The following is an edited transcript of their conversation.

Scott Tong: The companies, the innovation that was built on this technology, whether it is social networking or gaming or video, a lot of those companies that built their products on top of this infrastructure were American companies. So the U.S. was kind of the hub for this giant economic boost for the country. You have the European Union, Japan, South Korea, all investing billions in this — tens of billions. And then, of course, there’s China which has invested more than any of these competitors as far as the infrastructure. So the assumption is if you’re first to kind of build this 10 lane super highway in the sky … that you know, if you build it, that they’re going to come. That these companies and these innovators are going to come to your country.

Molly Wood: Yeah. What are people saying about the challenges of rolling out this infrastructure?

Tong: One of the big challenges that comes up over and over with 5G is how expensive it is to build the network. And one reason is because of the nature of the frequency where these signals are going to be transmitted is the cells are going to have to be really close together. So every little physical piece of the infrastructure is going to have to be much closer together than it is now. Now they don’t have to be these big giant cell phone towers. The nature of the technology, it could be a small little pizza box size thing on top of a light pole, but all those have to be installed. You have to negotiate with the city or the owner of a house to be able to put it there. So one of the price tags that one of the consulting firm said was on the order of $300 billion in the U.S. to build this out.

Wood: So what is the timeline for the rollout compared to some of those other places?

Tong: So the first 5G phones, there’s talk that they’ll be coming out in the next year. In two or three years, there’s talk that some of the networks will be commercial-ready to move into this Internet of Things, these machines that talk to one another, will be out on the market. What’s the broader timeline? Well you know a lot of folks in the industry talk about a five year rollout and even more broadly that each of the past generations of wireless technology 3G, 4G. Each of those generations has been about a decade. So maybe that kind of order of magnitude.