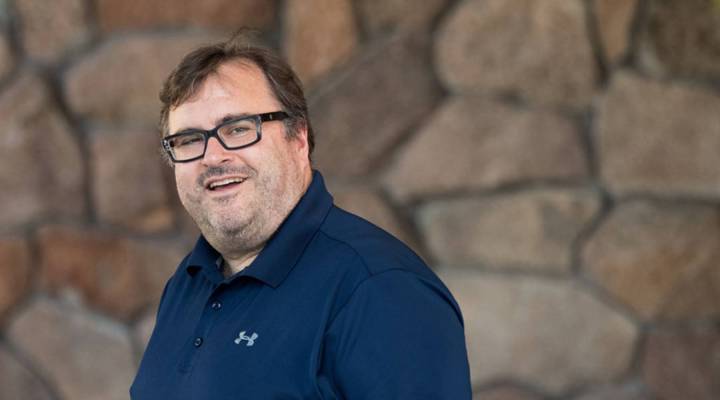 COPY
“The first that's scaling through the learning curve is frequently the first to scale and the one that essentially sets the ecosystem,” LinkedIn co-founder Reid Hoffman says. Drew Angerer/Getty Images

“The first that's scaling through the learning curve is frequently the first to scale and the one that essentially sets the ecosystem,” LinkedIn co-founder Reid Hoffman says. Drew Angerer/Getty Images
Listen Now

“Don’t focus on early revenue, measuring your long-term value or your customers” might not be the advice a new entrepreneur would expect. But Reid Hoffman, co-founder of LinkedIn, says if your business idea is a worthy one, “don’t sweat it.” Just focus on getting big quickly. He calls this concept blitzscaling, which is also the title of his new book. But while he says scaling a company as quickly as humanly possible is crucial, he thinks mitigating potential risks to avoid negative social impacts should be a key consideration for entrepreneurs, too.

Hoffman spoke with host David Brancaccio about the unconventional advice in his forthcoming book on how to be a successful but responsible blitzscaler. Below is an edited transcript of their conversation.

Brancaccio: Everybody knows LinkedIn, the Facebook for grownups. He didn’t actually wince, I thought he was going to wince. Give us a taste. Ramping up that now famous brand was a blitz?

Hoffman: It was. It was a lot of the principles we described in the book, which is, how do you get to scale quickly? Because you have to build a network. It’s not valuable until you have everyone on the network. How do you focus on scale before you focus on things like revenue, or unit economics, or customer acquisition cost, or any of that sort of thing? And so you focus on establishing the network first.

Brancaccio: You know, we used to make fun of that during dot com 1.0 — the idea that the last thought in anyone’s mind was actually earning a profit. But you’re saying, if you want to get big, [profit] actually isn’t the first thing on your mind?

Brancaccio: I’m interested in many pieces of this, but here’s a section in particular. You, Reid, think that even with this fast push to scale up a company that you have to be thinking about social impact?

Hoffman: Yes, I think one of the key things is that great companies are thinking about “How are we transforming the world? How are we making the world better?” And that’s both upside and downside. One of the things that we have a whole chapter on in the book [is] as you’re scaling really fast, as you’re running as fast you can down the road, be thinking about which possible risks you’re taking that you need to mitigate.

Brancaccio: Possible risks, because there are unintended consequences of this technology. You know, I’m thinking of Mark Zuckerberg, who I think is a friend of yours. He did not envision his social network as a democracy disruption device. But some argue it may have become that at some level. I mean, you’d think it’s high time people developing new apps, new tech, new business, pause — you say there’s no time to pause — but that they wrap in “What am I doing to the world?” as part of their thinking.

Hoffman: Part of what we’re learning, and I think Zuck is learning this, and the rest [are], as you’ve gotten bigger, you should transform the level of investment you’re putting into mitigating risks. So, for example, they now have hundreds of engineers dedicated to “How do we make sure the content that’s being shared is actually, in fact, more accurate, or more sources that have a deeper tie to traditional journalist[ic] truth? How do we make sure that nation states are not hacking us or trying to create political dissension within the country?” And they’re putting investment in that now because they realize that they’re part of social infrastructure.

Brancaccio: So interesting. I really enjoyed part of the book in which you give a list of counterintuitive advice. It’s things like embrace chaos. When you’re hiring don’t necessarily look for Ms. Right or Mr. Right, but Ms. Right Now. Tell me about this: You should launch a product that embarrasses you?

Hoffman: The emphasis is on speed and on getting contact with your customers and learning from it. And the first that’s scaling through the learning curve is frequently the first to scale and the one that essentially sets the ecosystem. And so it’s mostly within a consumer internet, but like LinkedIn when it launched was like a profile, an invitation and a little bit ability to message.

Brancaccio: It wasn’t mature technology, you would say.

Hoffman: No. But it’s an emphasis on speed with the embarrassment as the understanding, like, how fast you need to move and the fact that it will make you awkward and uncomfortable.

Brancaccio: I could see that would work with something like LinkedIn. You want to be careful if you’re coming out with some newfangled medical device that you don’t release something imperfect to the market.

Hoffman: One hundred percent. And we actually wrote an essay on the Theranos failure.

Brancaccio: Which is why it came to mind.

Hoffman: Yes, and so it’s really important to understand, well, what will your negative possible consequences be? And make sure you don’t do anything really bad.

Brancaccio: Does it really say in here that during this initial burst of lightning-speed growth, you should ignore your customer?

Hoffman: It does, in part because what you’re focused on is the massive numbers of future customers. So as opposed to saying, “Oh, we’re trying to have a delightful experience necessary just for that first person,” it’s growing towards what the large-scale eventual customers will be.

Brancaccio: I guess, but underlying this is that you have something that you’re offering that’s of great value to them.

Hoffman: Yes. And businesses don’t work unless you do.

Brancaccio: This book is, I presume, a response to people tugging at your sleeve, saying, “Tell me how to do this quick?”

Hoffman: And I think that as part of the hyperconnected global age, more and more businesses are competing on a global scale. And this is the pattern by which the next generation of businesses, especially tech businesses, are created. And we want that to be able to happen anywhere, not just Silicon Valley.