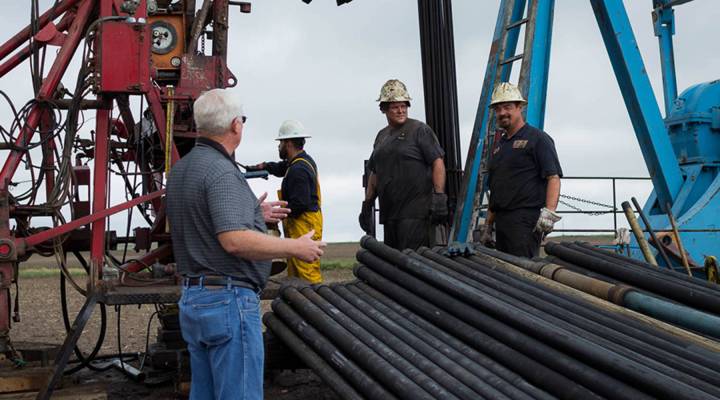 To be an oil person in Kansas is to understand that bad times follow good and that betting on any dip or upswing is a game for suckers.

Yet it can be so tempting when crude prices soar. There’s so much money to be made. Or, of course, lost.

The far-flung, mostly small and independent oil and gas companies in the state found themselves laid flat by the bust of 2014. It still stings.

So now, as oil prices creep upward, the drillers and pumpers emerge anxiously — wary both of missing out on high prices for their commodity or firing up production only to get slammed by yet another price tumble.

“We haven’t spent much money,” said Jeremy Ulrich said, a production specialist for Scheck Oil Operations. “We try to do everything as a minimum because we’re still scared.”

That anxiety haunts the state’s oil industry. That’s why, in the offices of one operator after another, tough calls loom about bringing existing wells to life and whether to dare drill anew.

How quickly those companies dispatch crews and invest in production could determine how well Kansas might cash in on rising energy prices. Don’t blame them if they’re slow to cash in — and worried whether investments made now could lead to bankruptcy if a cave-in of prices comes the way it did four years ago.

An oil rig from Express Oil Service sits in the middle of a field in western Kansas.

Some signs that the Kansas oil and gas industry is beginning to awaken from its nearly four-year-long slumber can be found in the oil fields of western Kansas.

About 15 miles east of Hays, Kansas, Luis Fernandez works with his crew of roughnecks to check for a possible leak in the concrete casing of a well. The job is just one of dozens on a growing list Express Well Service is hustling to keep up with after years with too little work.

Coming off earlier boom years, Express found itself forced to cut back its workers’ hours and even lay off some folks.

With prices that low, the industry came to a near halt. Companies couldn’t afford to service the wells they had, much less drill new ones.

Meanwhile, the price of oil has slowly started to tick back up. In July, oil went for as high as $70 a barrel. That tempted many in the industry to start pumping again.

Workers at Express Oil Service work on an oil well in western Kansas.

And that means a lot more work for Express Oil Service.

“We’re behind,” said Tom Casey, who is a supervisor at Express. “We have a backlog of wells to work on — a significant backlog — and it’s been that way for the last several months.”

While Casey said he has enough rigs to get the jobs done, he’s having a hard time finding people who are willing to work on them.

“The unemployment office — I work with Hayes, Great Bend and Salina — and they are all saying there’s just not hardly anybody out there looking for a job, especially a hard job like ours,” he said.

Even as the money, and the oil, starts to flow again, the prospect of another price dip, like the one in 2015, hangs over every decision companies make.

“Calling it a dip is a gross understatement,” said Will Darrah, who runs a small oil company based in Wichita. “I would have called it a crushing, soul-destroying period of the oil and gas business.” In the first few years after the crash, his company only drilled one new well. But this year, he plans on drilling 10 new wells. “It’s time to get over the beating that we’ve had and go out and try our luck again,” he said.

And he’s not alone with that sentiment. The number of requests for new wells filed with state regulators has been steadily increasing the past six months.

In April, the Kansas Corporation Commission approved 141 requests. By August, that number had risen to 236.

“We are heading into an acceleration right now,” he said.

But not everyone is as eager as Darrah to jump back into exploration and drilling.

Take Scott Lawson, of the Edmiston Oil Co. He has no plans to drill new wells.

“We’ve decided to spend our money catching up on some of the things we decided not to do during the downturn,” Lawson said.

While he likes where the price of oil is now, he’d like to see it stay there for six to eight months before investing money in new wells.

“No matter what you do, someone else tells you how much your product is worth,” he said. “And because of that, you have to be constantly looking at all the variables making sure that you don’t get overextended or left behind.”

Even without new wells, Lawson said his company is still increasing the amount of oil it’s producing and, more importantly, making money again.

“There is a lot more optimism,” he said. “People that are coming into work aren’t slouched over, waiting for another grind.”

This story originally ran on KMUW.