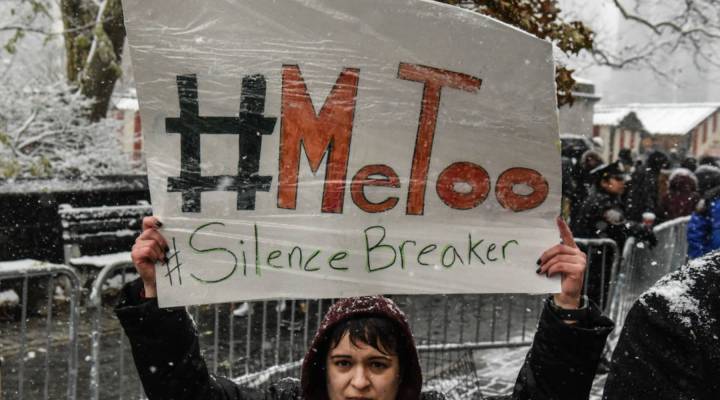 Nearly one year ago, news regarding the deep-rooted, sexually harassing behavior from Hollywood power player Harvey Weinstein shone a light on a culture of impropriety and predatory behavior that had permeated the entertainment industry. It also ignited the #MeToo movement, where people felt empowered to share their stories of harassment in an effort to bring the offenders — some of them powerful or famous — to some kind of justice. The movement and the sense of awareness it has brought with it has spread to other areas of society, include the corporate workplace. But has there been any real change on that front? Gillian Thomas, a women’s rights attorney for the ACLU, talked about that subject with Marketplace Morning Report host David Brancaccio. Below is an edited transcript of their conversation.

Gillian Thomas: Legislation really has not resulted from the #MeToo moment. There was a lot of legislation introduced in the last year —

Brancaccio: You were counting them up.

Thomas: In over 30 states [there were] roughly 125 pieces of legislation introduced around the country. I know, sounds promising, but most of that legislation actually had to do with regulation of the legislature’s own sexual harassment policies and their responses to those allegations. And most of the measures that were enacted had to do with that as well, but very few were enacted.

Thomas: And a few other things. I don’t mean to be so pessimistic. In California, naturally —

Brancaccio: Because of Hollywood.

Thomas: And just because California is its own sovereign nation. In California, there was a measure that passed that requires employers to do mandatory training and put in place better complaint procedures. Another couple of states that might surprise you, Louisiana and Virginia, also passed similar legislation. Then in Vermont, there was some legislation actually passed addressing the issue of nondisclosure agreements. The issue of nondisclosure agreements really came to the forefront through the Weinstein scandal, and there are actually two different kinds. One is the sort that employees sign when they start a job saying that you won’t say negative things about the company even to your co-workers, let alone to outsiders. And then there are also the kind of nondisparagement, nondisclosure agreements that are inserted in settlement agreements once allegations have been raised. The former, the pre-employment agreements, have been a definite target in Vermont, [the state] outlawed those. On the issue of nondisclosure agreements inserted as part of settlements, there’s not as much consensus about whether it’s the best thing to outlaw those because if they are outlawed, some advocates think that it actually will incentivize employers to push back harder on settling and force victims into a sue or go-silent conundrum.

Brancaccio: Another avenue where the law has touched the aftermath of the #MeToo movement are shareholder lawsuits; suing companies, saying you didn’t do enough and we ended up holding the bag.

Thomas: That’s really extraordinary. It’s some of the biggest names in some of the biggest scandals that have come to light. So it started with Fox, and there was a shareholder lawsuit that was resolved for over $90 million a year ago and led to a lot of different programmatic changes, and then that’s been followed by the Wynn Group, [Wynn Resorts CEO] Steve Wynn, [there were] allegations of harassment brought against [him] over a number of years. And then CBS in the wake of the [Les] Moonves scandal, as well as just this month, Nike has been sued by a group of shareholders.

Brancaccio: Now as we know, plenty of companies still haven’t gotten the memo on this, but are there some companies that are figuring out how to, in your view, properly respond to terrible a cultural problem like this?

Thomas: I really think there are. My friends in the management bar who represent employers as part of their practice tell me that their phones are ringing off the hook. Whether it’s because of fear of lawsuits or negative publicity or really just because they do want to do the right thing.

Brancaccio: Companies calling, saying  “What are we supposed to do? We have these allegations,” or “We want to be sure this doesn’t happen here.”

Thomas: Yeah, it’s the latter. It’s getting in front of the allegations, it’s figuring out, “OK, we have a harassment policy and complaint procedure on paper, but how do we really make it work? No one’s using it.” And of course, statistics show people don’t use those policies because they fear retaliation. And those studies also show that retaliation usually does result from bringing complaints. So there are many employers who are saying, “How can we get this right [and] how can we do better?”

Brancaccio: And what’s the answer?

Thomas: Oh, how long have you got? What it really takes is top-down commitment. The EEOC, the Equal Employment Opportunity Commission, came out with a task force report a couple of years ago with a number of different risk factors that indicate that an employer might have more of a susceptibility to harassment occurring in its ranks. And then also itemized best practices and it’s, as I said, top-down response — the message coming from the top that this matters, that there will be accountability. And you know, training. Training gets a very bad name for a very simple and good reason, which is most training is terrible. And also, it doesn’t happen enough. “Such bad food and such small portions,” right?

Thomas: That’s right. I mean, we come into our workplaces full of baggage from the culture, from our upbringing, from our families, our relationships. And it’s just ridiculous to assume that a half an hour video training once a year is going to do anything to change anything. And so the best training is recognized as being interactive, as including hypothetical scenarios that draw the participant in, that happens frequently and that happens as part of a larger regime of mutual respect, culture creation. It shouldn’t just be about avoiding liability, it should be about creating a place that everybody feels safe.

Brancaccio: For proactive companies. What about the companies that are actually dealing with the problem that has come to their attention in their ranks?

Thomas: Dealing with a problem requires, I think in the experience of experts and certainly in the experience that I’ve observed, involves getting an outside third party to do a thorough investigation. You can’t have people who are investigating the boss also be responsible to the boss. Another thing that’s really important is enlisting all managers in identifying and then remedying harassment. You know, the things that we’re reading about in the press really are the outliers, the top top of the corporate hierarchy. Most harassment is happening by either co-workers or middle managers. And so making everybody accountable and having investigations that really let people know that they’re going to be safe from retaliation and encourage them to speak out. And the final thing I’d say is there’s a lot of talk about overcorrection about firing people for offenses that shouldn’t be fireable. I really do find that people who are expert in this field, who study it for a living, understand that there’s a range of behavior and that firing sometimes is the only appropriate remedy. But you speak to most people who are the targets of harassment and they just want it to stop. They don’t want anyone to get fired. Again, there are those occasions when firing is appropriate. But there are lots of different kinds of remedies between doing nothing and firing.