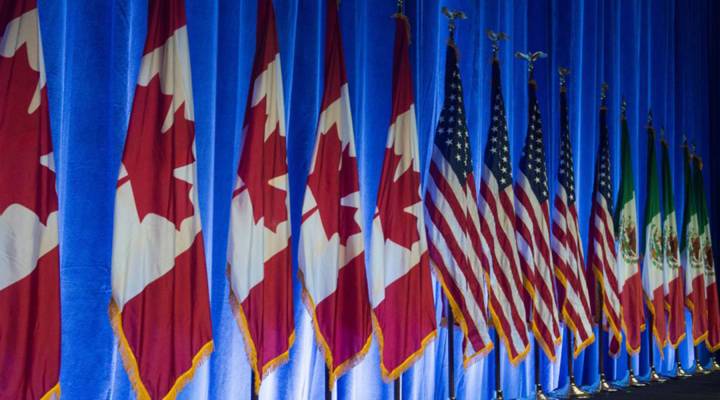 This week the United States, Mexico, and Canada made a tentative trade deal that will replace NAFTA, the North American Free Trade Agreement. And while NAFTA is better known for, say, avocados and cars, the United States-Mexico-Canada Agreement, as it’s known, is updated for the digital age. For example, it would protect internet companies like Facebook or Google from being sued over material that shows up on their services. It addresses how internet services and future 5G might work in all three countries. And it would make it easier for digital goods and data to cross borders. Molly talked about it with Victoria Espinel, who is on the federal Advisory Committee on Trade Policy and Negotiations and is CEO of the software industry trade group called BSA / The Software Alliance. The following is an edited transcript of their conversation.

Victoria Espinel: At essence, digital trade is often about data and how data moves around the world. And the reason that this new agreement is really important is because right now, even though data is very important to our economy and to the global economy, there is no international consensus on data and how data should be treated and what the rules are around data. And so it is a first step towards trying to create the international consensus that we clearly need on how data is used and how data is treated.

Molly Wood: So what’s in there? Let’s dive into that new trade agreement. How does it change how data moves across borders and what are some of the provisions that it makes?

Espinel: So I’ll give you a couple of examples. One of the things that it says is that, as a default rule, data can move back and forth across borders. There are some circumstances under which it can’t, but, generally speaking, that’s the default rule. And what that means in concrete terms is that if you are providing cloud computing, you don’t have to build a data center in every country in the world in order to provide cloud computing. It also means that countries can’t force data to stay within their borders in order for companies to be able to do business there. And that’s really important when you’re talking about emerging technologies like cloud computing or data analytics or artificial intelligence, because they don’t work unless data can move across borders fairly easily. That’s obviously important to software companies, but it’s really important for the customers of software companies. So for every small, medium or large business that wants to use cloud computing or wants to use AI or wants to use data analytics, they should care about this.

Wood: What comes next? I mean, I assume that this conversation around digital trade from both a legal and economic perspective is just going to get bigger, right?

Espinel: Right. This really is only beginning. I think one thing that we can forget sometimes is that these technologies, cloud computing, artificial intelligence, are still really new and that’s part of the reason that there aren’t international rules around them. They are only going to increase in terms of their importance to our economy. And so the conversations around them are only going to increase and expand. But, right now, when we don’t have a good consensus around these rules, it’s really not sustainable.

Need to get caught up on tech news you might have missed? Check out the tech news Molly is thinking about: