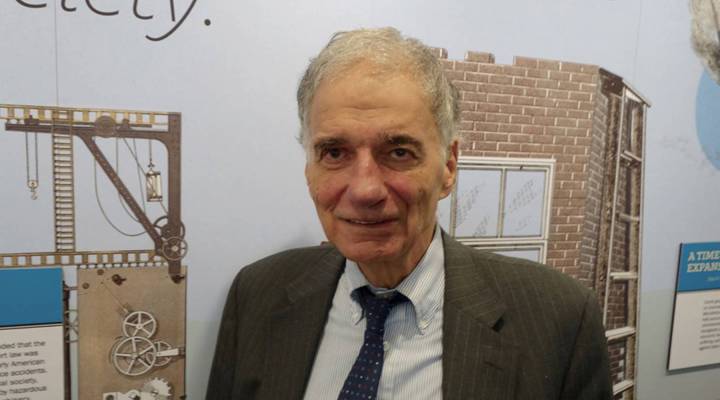 What’s the first thing you do when you get into a car? Put on a seat belt. Today we know that driving without a seat belt is unsafe and Ralph Nader spent much of his early career making sure motorists — and car manufacturers — knew this, too. Nader’s first article  on auto safety was published in 1959 and led him to a job in Washington D.C. researching the auto industry. The young attorney followed lawsuits of drivers who claimed to be wrongfully injured in car accidents, with special attention to those driving General Motor’s Chevrolet Corvair.

But as Nader was deep in his auto industry research, he began to suspect something was up, that someone was watching him. The consumer advocate said that he and his family received harassing phone calls and young women approached him in public with odd requests. In this web exclusive interview, Nader shares his memories with Marketplace Morning Report host, David Brancaccio.  Listen to the audio, or read an edited transcript of the conversation below.

Nader: I went to the Senate office building one day and I was followed by a GM paid detective. And he lost track of me. I guess I went on an elevator, he went up and then he went down. So, like out of a movie. And so he went to the guard and said “Have you seen someone who looks like this?” and the guard said “What are you asking that kind of question for? What are you doing here?” And it turned out that it was traced back to General Motors. There was a big Senate hearing, huge media coverage and it led to the fastest regulatory legislation for safety over the auto companies in American history.

Brancaccio: But I want to understand this, he wasn’t just following you. It was more than that in terms of what you believe GM was trying to do here…

Nader: Yeah, well GM was trying to get dirt on me to discredit my book, “Unsafe At Any Speed,” and the forthcoming testimony before a Senate committee.

Brancaccio: What were they looking for?

Nader: Any kind of dirt.

Brancaccio: What, they put like pretty girls in front of you?

Nader: Yeah, at the cookie counter in the store.

Brancaccio: But you didn’t go for it.

Nader: No, even though I have a sweet tooth.

Nader: Yeah, they settled for $425,000 — it was lot of money then — and I took it and started the first of the public interest advocacy groups.

Brancaccio: So that answers the question, the settlement didn’t all go to lawyers?

Nader: No, not at all. In fact, it was very nice to take on GM with lawyers who were paid with money from the settlement. That was sort of ironic.

Brancaccio: Your point is,  the most important thing is that these revelations helped cast a spotlight on this case which actually led to regulation, not just about invasion of privacy but about a lot more.

Nader: Yeah, I helped launch the modern consumer movement. There was auto safety legislation, then air pollution, water pollution, product safety legislation, on and on, in the late ’60s and early ’70s. It’s prevented millions of lives from being lost and tens of millions of injuries. Regulation, law and order against corporate bad behavior works.

David Brancaccio visited the American Museum of Tort Law earlier this month. Listen to the full interview, or read the transcript of his visit here.