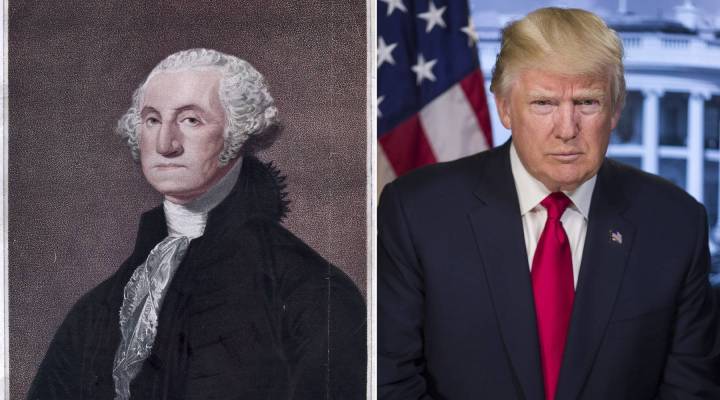 We originally published this story in January 2017, and we’re republishing it now following President Trump’s comments about George Washington, wondering aloud if the first president had “a bad past.”

As this week’s flurry of executive orders from the Trump administration has shown, the presidency has changed significantly over two centuries. But presidential conflicts of interest are as old as the republic itself.

This came up on the first episode of “Make Me Smart with Kai and Molly.” We talked briefly about George Washington’s wealth. Many of you wrote in to remind us Washington owned slaves. Others, like Ed Kitlowski, compared the Founding Fathers to President Donald Trump and his aides’ talking points:

“George Washington had more to gain financially in getting independence from Britain than as President,” Kitlowski wrote in an email this week. “One could make a strong argument that many of our founding fathers were opportunists…. The story of our independence is more creation myth than historical record. Our history books use ‘alternative facts’ in regards to much of the events.”

That’s an idea that first got off the ground in 1913, with Charles Austin Beard’s “An Economic Interpretation of the Constitution of the United States.” The book lays out in great detail the financial interests of all the Founding Fathers and declares Washington “probably the richest man in the United States at his time, and his financial ability was not surpassed among his countrymen anywhere.” He owned land across several states worth hundreds of thousands of dollars and had thousands more in stocks and bonds.

That was a challenging idea at the time, said Jason Gart, a historian and vice president at the research firm History Associates. Sure, Trump owns a lot of real estate, but it can’t really compare to what Washington’s holdings meant for him at the time.

“He was more than just a landowner,” Gart said. “To say someone is a landowner in the early republic, during that period, that means you’re the top of society.”

Indeed, Washington’s fortune sparked some of his resentment toward colonial rule. After winning a lower legislature seat, Washington spent his 20s and 30s building up his plantation at Mount Vernon, according to his biography from the University of Virginia’s Miller Center. Washington grew tobacco at first, but trade agreements with Britain meant it wasn’t a moneymaker. He changed out his fields and got into weaving and fishing, all with the goal of decoupling his business from Great Britain.

That vast fortune was built on slavery: Mount Vernon was home to some 150 slaves before the Revolution and 318 when Washington died in 1799, writes University of Delaware professor Erica Armstrong Dunbar. Throughout his presidency, Washington skirted laws that would have compelled him to free his slaves, and promoted legislation that made it easier to seize runaway slaves. In fact, Washington spent his last years chasing one such runaway. Dunbar wrote a book on that slave, Ona Judge, and summarized her story two years ago in a New York Times op-ed:

What prompted Judge’s decision to bolt was Martha Washington’s plan to give Judge away as a wedding gift to her granddaughter. Judge fled Philadelphia for Portsmouth, N.H., a city with 360 free black people, and virtually no slaves. Within a few months of her arrival, Judge married Jack Staines, a free black sailor, with whom she had three children. Judge and her offspring were vulnerable to slave catchers. They lived as free people, but legally belonged to Martha Washington. Washington and his agents pursued Judge for three years, dispatching friends, officials and relatives to find and recapture her. Twelve weeks before his death, Washington was still actively pursuing her, but with the help of close allies, Judge managed to elude his slave-catching grasp.

Jimmy Carter and his peanut farm represent a more recent and frequently cited example of a president who entered office with sizable investments. Separated by centuries, Mount Vernon and Trump’s vast business empire may seem like apples and oranges. But Washington serves as a reminder that a man with many financial resources and potential conflicts of interest has assumed the nation’s highest office before.

“I always like to joke that every time history repeats itself, the price goes up with it,” Gart said. “It’s easy to always think that the times we’re living in is unique, and they never are. They never are.” 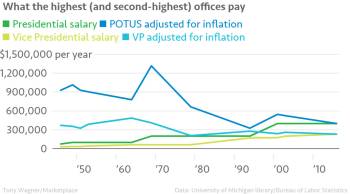