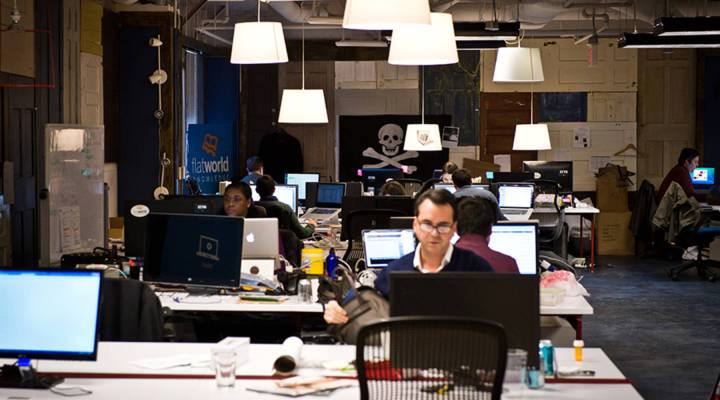 It used to be that stories of tech companies breaking all the rules and fighting city hall were considered sexy. But right now we’re having conversations with more suspicion about things like unproven driverless technology, online advertising, unstoppable data collection and automation. Here with a defense of tech’s disruptive mentality is Bradley Tusk, a political operative turned tech consultant who has a new book called “The Fixer.” It’s full of pirate stories of him helping heroic startups, like Uber, work around innovation-killing politicians and their rules. Host Molly Wood asks Tusk whether it’s the right time for a book that takes the side of tech companies. Below is an edited transcript of their conversation.

Bradley Tusk: The world that I live in is not the Google, Amazon, Facebook world. It’s the world of Series A, relatively early stage startups, who are trying to get off the ground. They’ve got some new idea that’s usually a tweak on an existing industry, they figure out a better way to do it. They launch whoever the entrenched interest is, whether it’s the taxi cartel, the hotel industry, the casinos, whoever it is. They don’t want competition. They don’t want lose market share. So they lean on the regulators and politicians to crack down. And then my job is to kind of fight it out and make it OK.

Tusk: Absolutely. The logical conclusion of any startup succeeding is becoming ultimately a giant entrenched interest themselves that gets disrupted by a new startup.

Wood: And so, you feel like that’s still a story that needs to get told, even now in this kind of current climate, that once upon a time, Uber was an innocent babe in the woods?

Tusk: There’re 17,000 startups in the U.S. There’s one Uber. And for every time that a company like Uber is able to break through a cartel and break through the whole political process, so many others aren’t able to do it. They don’t know how to approach the situation, and it’s totally fine for a startup to fail, and most will, but it shouldn’t fail because of pay-to-play politics. It shouldn’t fail because a taxi medallion owner writes a big campaign check to a mayor, and as a result they decide they’re going to crack down on a particular form of ride hailing. This is true in pretty much every single sector. And so, the point of the book is to say, “If you’re a startup, here’s how you think about this stuff. And most importantly, you have to take politics seriously.” What I have found is startups will take their tech seriously, they’ll take their fundraising seriously, but they kind of look at government and politics as an afterthought, and that’s a really risky thing to do.

Wood: What are the biggest mistakes that they make?

Tusk: They don’t know what they don’t know. The same sort of arrogance in Silicon Valley that causes founders to often seem tone deaf, that I think leads to diversity issues, leads to sensitivity issues, I think also, just more broadly, there’s an assumption that just because you went to Stanford, and you were in Y Combinator, and you have an IQ of 168 or wherever it is, doesn’t mean you know anything about every single sector, right? I don’t know anything about coding and programming, but I’ve spent most of my career in government and politics, running campaigns, and I understand how to move a piece of legislation through a state government, for example. And for a long time, when I would talk to other founders in the Valley about this kind of stuff, they would very patronizingly just say, “No, no, no, once those regulators see how smart I am, I’ll do whatever I want.” And I kind of chuckle and say, “I’m pretty sure politics doesn’t work that way.” But it took the big fights that Uber, Airbnb and FanDuel and so many other startups had, to get tech to start taking politics more seriously.

Wood: You described it as sort of “pay-to-play” and “cartels in charge.” I mean, I think some people would say it’s also about protecting industry or making sure that there’s a rental market in a city that hasn’t all gone to Airbnb. Where does that line get drawn?

Tusk: I think it has to get drawn at what’s reasonable regulation and what’s simply an attempt to stifle innovation. Right?

Wood: How do you tell?

Tusk: Well, part of it’s the market, right? I mean the reason why Uber did so well, the reason why Airbnb did so well, is people clearly weren’t satisfied with the status quo. I mean, having a government that just forces a lousy taxi system on you in the name of regulation or in the name of favoring campaign donors is not acceptable governance, right? So should Airbnb pay the same taxes that the hotels pay? Absolutely. Should they be regulated? Absolutely. But should cities just decide unilaterally, “We’re going to ban this thing because the politics don’t work in our favor or because of the campaigns check’s we’re getting?” No.

Wood: So what kind of thing do you actually do?

Tusk: So we run campaigns. If you take, for example, sure you love this one: this scooter company based out of Los Angeles called Bird. We’re investors in Bird. We invested in the Series A, we’ve invested in every round since then. And we work with Bird to enter markets all over the U.S., and it means various things. Sometimes that means we get permits, sometimes it means we have to pass legislation, sometimes it means we enter a market and work with the city on helmet issues and parking issues and insurance issues and things like that. It really varies from jurisdiction to jurisdiction. But it’s figuring out A) What are the laws on the books? B) What can and can’t you do? C) Who are you disrupting, how powerful are they politically and where are they’re going to try to stop you? D) Who are the politicians in charge and what is it going to take to get them to see it your way? And then E) Executing all of that, whether it’s a campaign or you’re begging for forgiveness or asking for permission, whether you’re trying to pass legislation or you’re just trying to burst through the door.

Wood: And right now, at this exact moment when you have, at least with some people, almost an equal and opposite distrust of both politicians and maybe tech companies. Like, who is getting the better PR right now?

Tusk: Yeah, both sides have to really understand, one, that the public is not stupid. If you just take Facebook as an example, what I found infuriating on both sides is Facebook wants you to believe that you can have the cat photos and keep up with your 8th-grade best friend and everything else, and all of your data can be protected, and nothing is going to be monetized or harvested. That’s not true. And Congress wants to say you can have the cat photos and keep up with your eighth-grade best friend and protect all of your data, not monetize any of it. That’s also not true. And I think if both sides are willing to be a little more truthful with the American people and say, “Facebook’s a company, here’s how they make money. If you want these things, this is what you’re giving up. You decide whether or not it makes sense for you.” I think people, at the end of the day, can handle the truth, and they would respect it a lot more than both sides just constantly spinning them.

Wood: I feel like that is the least fixer thing you’ve said so far. Like the idea that it’s not a nihilistic fight between one self-interested party and the other. That it might actually come back down to what is good for people, like the right amount of regulation, the right amount of safety. Are you a good guy, Bradley?

Tusk: We’ll see, yeah, I hope so. Take Bird, for example. There’s no question that you have to be able to deal with helmet issues, insurance issues. Are they riding on the sidewalk or in bike lanes or on the street? Where are they parking? There’s no world where Bird should just be allowed to do whatever it wants without any sort of regulation. And it’s also not a world where we have so much traffic and so much congestion and such bad mass transit systems that we shouldn’t introduce new element of transportation that can reduce all of those things and help all of those things. You know, it’s a balance in every single case, and what I talk about in the book is any regulation is not inherently good or bad. It’s how it’s applied and whether or not it’s favoring an entrenched interest or it’s favoring the consumer. And you could be favoring the consumer on the side of the incumbent, the status quo, or on the side of the startup. That’s who you should be looking out for.