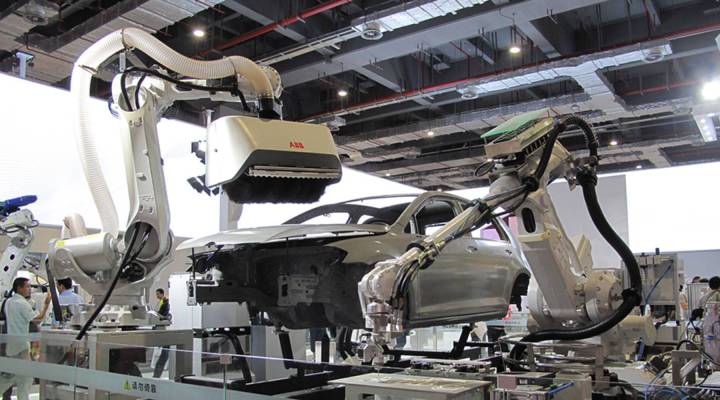 At the China International Industry Fair in Shanghai this week, thousands of booths were displaying their shiny industrial robots.

The United States has announced that it will implement a 10 percent tariff on $200 billion worth of Chinese goods starting Sept. 24. Despite this, the mood among many manufacturers at the fair remained upbeat.

For some, it may be because they have alternate markets.

“Right now, we mainly export to Europe and the U.S., but next year, China will become our biggest market,” said Su Nianshen with the EMC Machinery Co. The firm makes machine parts used to produce cellphones and automobiles.

Some of the products have been subject to a 25 percent U.S. tariff since July as part of the current U.S.-China trade dispute. However, Su said sales to the American market were sliding even before the tariff was imposed, because U.S. factories are not as competitive and do not need to upgrade to his products.

“Our sales to the U.S. will likely shrink by almost half this year to less than 10 percent,” Su said.

At the start of the trade tariffs, most suppliers interviewed by Marketplace expressed optimism that the U.S.-China dispute would soon be resolved. However, with this latest round of tariffs, half of all products coming from China will be subjected to import levies.

Since China sells far more to the United States than it buys, the Chinese government is unable to match tariff for tariff, but it has retaliated by expanding its tariffs to cover nearly all products exported from the United States along with other “qualitative” measures to punish American firms.

President Donald Trump has promised that he will follow up with another round of tariffs.

Still, a company called MegaRobo that designs intelligent robots for hospitals and research labs tells Marketplace it intends to proceed with its plans to export to the United States soon. Currently, its products are not on U.S. tariff lists and the American chip sets it buys are not subject to Chinese tariffs either.

However, co-founder Qiao Zhixin said the U.S. chip sets now cost him 10 percent more. Qiao believes his supplier in China is selling other items that are affected by tariffs and has raised all product prices to cover any profit loss.

MegaRobo co-founder Qiao Zhixin still plans to move ahead with plans to sell to the American market despite U.S. threats of more tariffs.

So far, the firm is absorbing the extra costs because Qiao said the alternatives to the American chip sets are not available.

“It is impossible to replace all American parts. The whole world is closely connected. It’s the same for the U.S. Can American firms avoid using China products? The U.S. economy cannot develop without the help of China,” Qiao said.

Other companies, like Danish firm Mobile Industrial Robots, are also caught in the trade dispute. MIR manufactures in Denmark and counts the United States and China as its biggest markets. The firm works with global firms like Airbus, Flex and Honeywell.

“[The trade dispute] hasn’t affected us yet, but we don’t how it’ll affect our customers, since [they] are electronic manufacturers and in automotive, so it could be that if they go down in volume, probably we would have some kind of effect,” CEO Thomas Visti said.

He is optimistic that the trade dispute will be resolved soon, because he said the current tit-for-tat tariffs just don’t make much business sense.