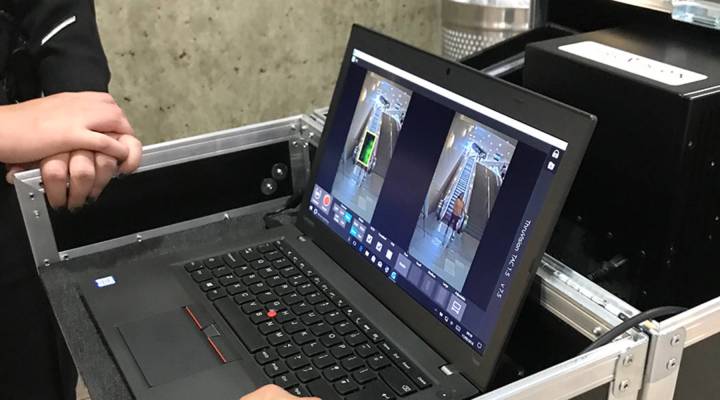 The morning rush had slowed to a trickle at Los Angeles’ main subway terminal, Union Station, but two police officers were still surveying the commuters on the escalator; first, with their eyes; then, through a laptop screen on top of a large black box on wheels.

“We wanted this to be obvious,”said Susan Walker, head of physical security for the Los Angeles Metropolitan Transportation Authority, standing nearby.

As travelers approached the large black box on wheels, known as a portable millimeter wave scanner, they appeared on its screen as energy waves. If they appeared as a green blob, they were considered safe, explained Walker. If a black blotch showed up, they could be considered a threat. The technology, according to its maker, a United Kingdom-based company called ThruVision, can detect explosives, assault weapons and suicide vests in crowds of up to 2,000 people at once.

LA Metro has bought four of these units at about $100,000 a piece. Walker said the agency plans to place them at stations, randomly, along with canine units and officers.

“We are out here trying to show the people that we are trying to keep them safe in our system,” she said.

The LA Metro is the first mass transit system to adopt body scan technology to screen thousands of passengers for explosive devices during peak traffic periods at its subway stations. LA Metro started testing the technology last year through a pilot with the Transportation Security Administration. For the TSA, which is encouraging other cities to consider this technology, LA’s sign on is a big win. It’s one step forward for the agency, which has a mandate under the 9/11 Commission Act of 2007 to strengthen surface transport security.

Robert Pryor, director of the TSA’s Intermodal Technology Division, said in the past, it had been difficult to find technology that would work in large bus and train terminals with multiples entries.

“Until about two or three years ago, the technologies had not matured,” he said. “They weren’t effective. They were too expensive.”

He said the TSA put money into helping develop screening technology and has set aside about $2 million so far to expand it to some of the nation’s transportation hubs. He said Chicago, Boston, Atlanta, and San Francisco have either used the technology as a pilot or expressed some interest in it. Some cities could be eligible to pay for the technology through a grant from the Federal Emergency Management Agency.

Security technologist Bruce Schneier, who is currently an adjunct lecturer at the Harvard Kennedy School, said cities may be interested in the technology, but it would only be to play a leading role in “security theater,” creating and keeping up an impression that travelers are safe.

“At best, they make any would-be terrorist make some minor changes in their plan,” he said. “Focusing on this very specific threat is a bad use of money.”

Schneier said the TSA and metropolitan agencies should invest money into investigation, intelligence, and emergency response.

Meanwhile, the TSA expects to continue to roll out its scanner technology, one mobile unit at a time. The same day it announced its partnership with LA Metro, it announced a pilot with the Port Authority of New York and New Jersey where, last December, someone tried to enter the bus terminal with a suicide vest.

John Bilich, chief security officer, said the Port Authority is now evaluating whether to buy the technology, which it would pay for through fees and tolls.

“We’re looking to defend ourselves as best as we can,” he said.