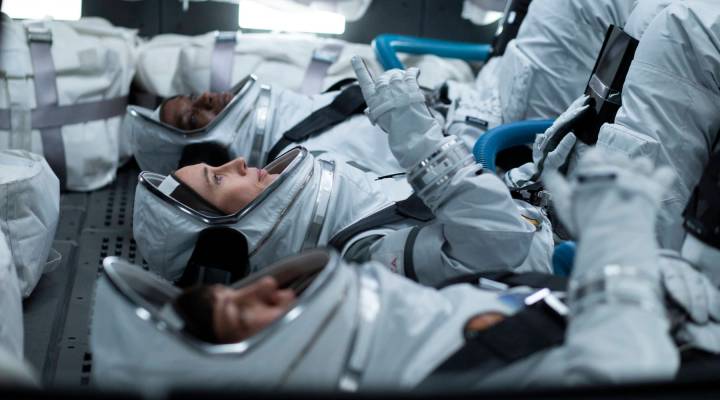 COPY
Hulu's "The First" imagines what the first mission to Mars might be like. Courtesy of Paul Schiraldi
Marketplace Tech Blogs

Hulu's "The First" imagines what the first mission to Mars might be like. Courtesy of Paul Schiraldi
Listen Now

We are still at least 15 years away from the first human mission to Mars — that’s at the earliest. But that hasn’t stopped Hollywood from skipping ahead to the future. Hulu, the online streaming service, is out with a new series tomorrow called “The First.” It’s set in the 2030s and, as the name implies, it imagines the first human mission to the Red Planet. Now, in addition to getting the astrophysics right, the show producers had to get the future right. And, for that they called a futurist. Amy Webb is founder of the Future Today Institute. She usually helps businesses with strategy. But, from time to time, she consults on films or shows set in the future. One of the questions she had to answer on “The First” was whether smart phones would still be around in fifteen years. The following is an edited transcript of Webb’s conversation with Molly Wood.

Amy Webb: One of the key pieces of technology folks will notice is that everybody is wearing a pair of smart glasses and some kind of earpiece. And that is the primary mode of communication. That’s the primary tool. People don’t have smartphones anymore. And so we weren’t trying to create something that looked cool. Everybody who worked on that show wanted to understand how and why we would transition away from smartphones. So we created all this data. My job is [to] collect the data and run the models and figure all of this out. And at the end of it, I think we have a landscape that feels very plausible.

Molly Wood: I wonder if when you’re trying to portray the near future if restraint is a large component of that … Because it takes you a minute to notice the future elements … You know, to sort of be like, “Oh those in-ear gadgets look you know like what an AirPod will evolve into.” But it’s not over the top.

Webb: No. And if anything the technology shouldn’t be something that people are focusing on as they’re watching the show. It should be more like, “Oh, ok. That makes sense.” And then they go back to the stories of the characters. I think when movies and shows get their emerging technology right, the technology is part of the tone and it serves a narrative purpose, but it’s not a main character.

Wood: And is that where people are most likely to go wrong when they’re trying to sort of predict the future? Do they try to think of too much or invent things that aren’t just baked?

Webb: Yeah, so I have a strange job title. And so not everybody quite gets what futurists do. Our jobs are absolutely not to make predictions. There’s a bunch of reasons for that. The primary reason is because it’s mathematically impossible. And this is a data-driven field. If my goal is to try to understand ‘x’ number of years from now, there is no way for me to get my hands on every single variable that will matter between now and whenever that time is. So it’s a mathematical impossibility to predict a future where there are an unknown number of variables. So that being said, the goal isn’t to make predictions. The goal is to make connections. So given what we know to be true in the year 2018, what does the year 2031 look like?