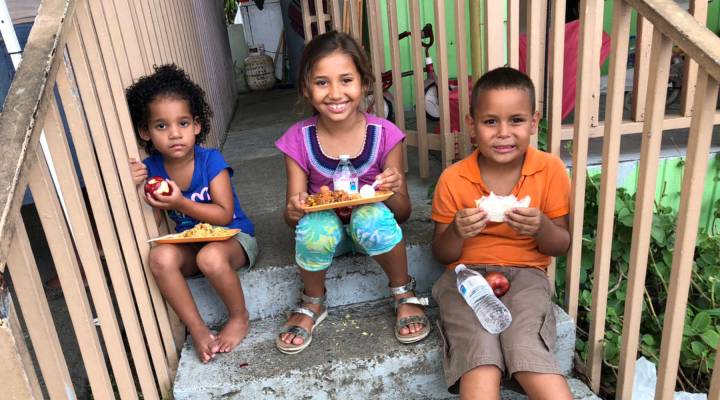 COPY
With schools closed or only open for a short time, children across the island were a priority. Photo courtesy of World Central Kitchen
Shelf Life

With schools closed or only open for a short time, children across the island were a priority. Photo courtesy of World Central Kitchen
Listen Now

Thursday morning, President Donald Trump rejected the government’s assessment of the death toll from Hurricane Maria in Puerto Rico last year. He tweeted: “3000 people did not die in the two hurricanes that hit Puerto Rico” and accused Democrats of inflating the number. Those statements are not grounded in fact. What is fact is that Puerto Rico was devastated, and thousands did die because of a lack of electricity, shelter, food and water. José Andrés, a Michelin-starred chef, has a string of high-profile and profitable restaurants, and since the storms of last year, he has a reputation for something else: feeding people when disaster comes. Andrés got to Puerto Rico four days after Maria hit, and through his nonprofit, World Central Kitchen, has served 3.6 million meals to date. He talked with Marketplace host Kai Ryssdal about his new book, co-authored by Richard Wolffe, “We Fed an Island.” The following is an edited transcript of their conversation.

Kai Ryssdal: You tell a really good story about getting to Puerto Rico, about, you know, going to the ATM and pulling out a couple of thousand dollars and $500 chunks and reserving airplanes and all this stuff. You get there, you land. Obviously, there’s destruction. What was your first thought? What was your first, “All right, here’s what I’m going to do”?

José Andrés: Well, what I know is cooking. I’ve done this all my life. I feed the few, but I’ve been feeding the many. And very quickly we began only cooking. I thought we were going to be doing a few thousand meals a day and I will leave some money and one kitchen functioning behind. But the days pass by and very quickly I learned that the island, the local government, the federal government and the big charities, they didn’t have a feeding game.

Ryssdal: The thing that hit me in that first chapter, and we should say here you have a restaurant down there and you’ve been working in Puerto Rico for a while, but you got off the plane and it seemed like you knew everybody. And knowing everybody helped you set up supply chains and lines of credit and all of that.

Andrés: I think all my life, I always love to knock on the doors. Even in those doors that I don’t know anybody behind the door. I’m good at that. I think we all need to knock on the door when we want to achieve something. So, you know, I got some help that obviously some people knew me because TV or because I’ve been going to the island a lot. But at the end of the day, what I try to do every problem, we try to transform it into an opportunity. And that’s what, in a very simple way, got us going.

Ryssdal: I wonder though, chef, how much of your success down there was because you were, in the beginning anyway, right, you were small and you could basically just decide. Right? You were going to do it and you went and did it as opposed to some of the bigger organizations that it’s clear in this book you had a really big problem with, [Federal Emergency Management Agency] and some of the institutions that, you know, were sitting in meetings and doing things bureaucratically, I mean, you were immensely frustrated by that.

Andrés: I want to make sure that — I believe that the great men and woman of FEMA, they are my heroes. They do an amazing job. As well as many of the men and women in the big charities. But sometimes I do believe that the leadership fails the people and the red tape freezes simple solutions. For example, we saw those million bottles of water in an airport. We knew about that water, but there was other water going around the island. And sometimes we ask the question, “Can we use that water? Can you give me the water so we can take it to the 78 municipalities around the island? We know where people without the water live.” “No, we cannot give it give it to you because now you have a contract with us.” Say, “OK, can you sell it to me?” “Sorry the federal government doesn’t sell water.” This is the level of nonsense that sometimes happens in emergencies. Shouldn’t we make the system simple? We should be partners of the federal government, not just a contractor. I was not there to be hired for a job. I was there to lead and take over on a mission that seems nobody was taking seriously: bringing food and water to the hungry people of Puerto Rico.

Delivering asthma medicine across a collapsed bridge to Lilia Rivera in the remote town of Rio Abajo.

Ryssdal: So, I’ll tell you what, chef, your emotion there brings to mind a scene in this book. You have a press conference to express your frustration with FEMA and with bureaucracy and with, “We just want to feed the people,” and you think the press conference was a great success. But the people working for you, the chefs, are a little bit annoyed because they had to stop cooking for an hour.

Andrés: Yeah, but that’s normal. That only shows you that everybody has a voice. Everybody has an opinion. That’s important. But you know, thanks to that press conference with the money that the federal government put at the disposal of World Central Kitchen, we were able to keep feeding millions of people. And you need to remember that we didn’t show up one day to take the photo and put it on Twitter and Instagram and say how cool we are. Every time we made contact with a community, we kept going back, and we kept going back, every day without missing a beat. But the fun part is that we were helping the local economy, buying local bread, vegetables, fruits, and in the process start helping Puerto Rico to come back.

Andrés: Well, at the end, chefs, we function very well in chaos. Kitchens are chaos. But, you know, I wouldn’t not give myself an A, like maybe Mr. President has done. I wish I was more maybe diplomatic with FEMA and maybe they would really gave me more power to reach more people. We were not supposed to be there so, you know, we did OK. But I wish we were able to feed more people because maybe, maybe we wouldn’t be talking of 3,000 deaths.