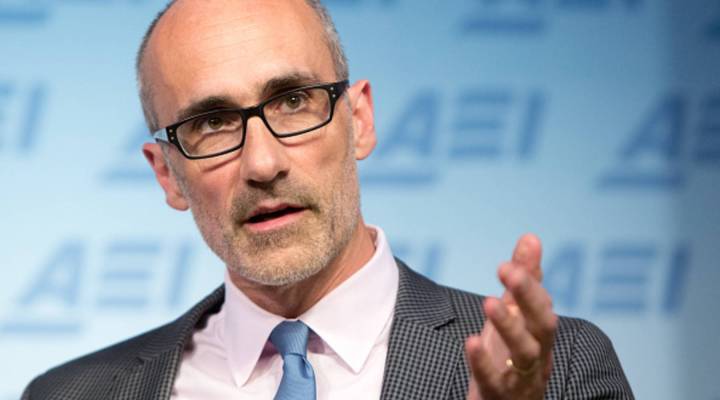 For almost ten years, Arthur Brooks has been president of the center-right American Enterprise Institute. Before he joined the think tank Brooks was a professional musician — the french horn his instrument of choice — and later spent time in academia. Earlier this year Brooks announced his decision to step down from AEI leadership and recently revealed he’s heading to Harvard to teach. Reflecting on his time with AEI, Brooks spoke with Marketplace host Kai Ryssdal. The following is an edited transcript of their conversation.

Kai Ryssdal: We’ve had a couple, three, four [conversations] the last five or six years, talking about a bunch of stuff. Poverty, charity, opportunity and dignity through work, and all of that. I want to talk for a second about the state of public discourse today. I’m going to go to AEI’s motto, literally its motto, which says “a competition of ideas is fundamental to a free society.” How are we doing here in 2018, with that competition?

Arthur Brooks: It’s not great. I wish it were better. I mean AEI exists because it’s always a challenge to have a competition of ideas. Disagreement is in bad shape. Ideas are the engine of what makes an innovative economy change. If we don’t have that we’re destined for mediocrity.

Ryssdal: Well, we don’t have that right now Arthur, I mean come on man?

Brooks: Well, we do in a lot of places. In business we certainly have that. The business climate in many parts of the American economy are more vital and better than they’ve ever been. Where we have it too little is, right now, in a moment of political populism. Why is that? Because it becomes very insular, it becomes tribal. When you get those things, you’re going to have just less ferment.

Ryssdal: Let me take a detour with this next question. I was in Minnesota the other day talking to Neel Kashkari, the president of the Minneapolis Fed and also the guy who ran TARP (Troubled Asset Relief Program) for Hank Paulson at the Treasury during the financial crisis.

Ryssdal: Very smart guy. But I asked him what he thought the legacy of the financial crisis was. And he said basically the political division we have today, some of the unrest that we have today, comes straight out of that. And you’ve talked about this and I wonder what you think about what Kashkari said?

Brooks: I think it’s right. The knock-on effect of a financial crisis is really uneven economic growth. So, we can always talk about the economic growth rate is 2.9 or 3.2 or 4.1 percent or whatever we’re measuring right now. But the problem in the decade after financial crises is that almost all that economic growth is concentrated in the top fifth of the income distribution. Now the political result of having stagnation in the bottom 80 percent is political populism, is despair across parts of the economy that people who are just looking at net aggregates they don’t see. The policy solution to this, to the extent that there is one, is for all of us to work for more even economic growth. Pushing opportunity out to the periphery of society. This is an opportunity for economic conservatives and people who talk more about social justice, for people at the margins of society to work together because we have to have a common goal here.

Ryssdal: So this gets to some of your ideas that we’ve talked about the last number of years on this program, right? The moral case for free enterprise. The dignity that comes with opportunity to work and to do things. Do you think you’ve gotten traction on that in the past 10 years? Or have you been shouting into the hurricane?

Brooks: Well, you know when you’re in the world of ideas it’s very easy to feel like you’re shouting into a hurricane. Why? Because you’re kind of a climate scientist in a world that’s more interested in weather reports. Politics is like the weather, and ideas are climate science. But in the end, in the long run, it’s ideas that matter the most.

Ryssdal: Are you an optimist then?

Brooks: You know Kai, I think I’m hopeful. An optimist is somebody who says, “it’s going to be OK.” Somebody who’s hopeful says “something can be done that’s good and we can affect it. It’s really in our hands.” I mean you and I, we’re in these great positions to try to talk to big audiences. To help people understand things differently. And a lot of people who are listening to us are in leadership positions as well. I’m extremely hopeful that we’re at the beginning of what I think is a new time in American politics. A new time in the American life of ideas. That’s the kind of aspirational hope that I have, and I actually think that we’re at the beginning of a big majority of people seeing that that’s possible and maybe bringing it about.