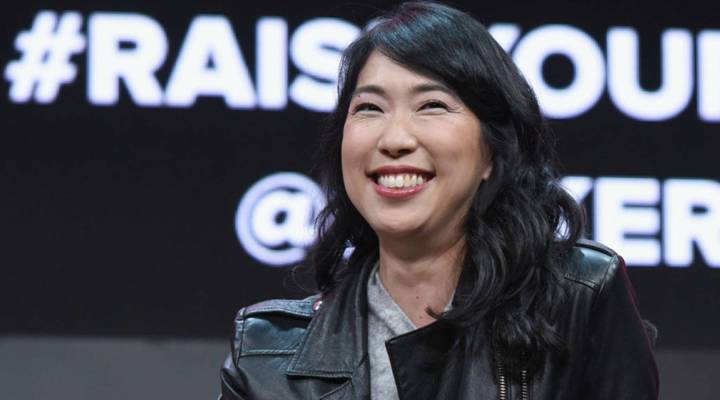 COPY
“You'll find actually great entrepreneurs out there ... who don't fit the exact profile that everyone believes is the great startup founder,” says Ann Miura-Ko, co-founding partner of Floodgate. Above, she speaks at the 2018 Makers Conference in Los Angeles. Vivien Killilea/Getty Images for MAKERS
Corner Office

“You'll find actually great entrepreneurs out there ... who don't fit the exact profile that everyone believes is the great startup founder,” says Ann Miura-Ko, co-founding partner of Floodgate. Above, she speaks at the 2018 Makers Conference in Los Angeles. Vivien Killilea/Getty Images for MAKERS
Listen Now

Venture capital can change the world. It’s how every big technology company got its start. It’s what good ideas need to become great companies. But how does it work? It starts with investments in a promising startup. Then if you’re lucky, it’s followed by a disrupted market, a changed economy and, of course, a lot of money. Ann Miura-Ko is the co-founding partner at Floodgate, a venture capital firm in Silicon Valley. She was an early investor in companies like Lyft, TaskRabbit, Refinery29 and ModCloth. She sat down with Marketplace host Kai Ryssdal to discuss diversity in the venture capital industry, competition and discovering great ideas. The following is an edited transcript of their conversation.

Kai Ryssdal: So venture capitalists are, I don’t know, somehow they seem like these exalted beings, right? They know where things are going to come from and they get to dispense the money. Why does venture capital matter?

Ann Miura-Ko: I think venture capital matters because at least at the very stage that I invest in, which is early, way too early and sometimes ambiguously legal early, we are looking at companies and technology well before everyone else recognizes what it is and where it’s going.

Ryssdal: So give me an example. I read in some of my background reading for this interview an article in which you went and you waited outside some guy’s classroom at Stanford with a million-dollar check in your hand?

Miura-Ko: Yes. So I found a company called Ayasdi, and it was founded actually by the former chairperson of the math department at Stanford. They sent me four math papers, no business plan. And so I put it at the top of the pile, started reading them and realized that there was not just a raw technology here, but when math is done right, it’s something actually quite beautiful. And I saw the opportunity to really figure out what is hidden within data. And I think the thing for me was I felt like, you know, there are not that many Ph.D.s who are also venture capitalists and who will sit down and read a math paper. And so I felt like if I couldn’t invest in this company, then there was a major problem. And so I ran to one of his classrooms and I said, “Gurjeet, please take this money.”

Ryssdal: I should know this, but I don’t. How’d it work out for you?

Miura-Ko: So initially, he actually said no. He said, “I don’t even know what I would do with a million dollars.” And so, we spent some time actually working through what that million dollars would get him. And once he had a potential customer locked up and he said, “I think I’m ready for money now,” that’s when we decided to jump in and lead around Ayasdi.

Ryssdal: Take a step back for me, would you. Talk to me about venture capital in the American startup economy right now. I mean, there’s a lot of money out there. Is there more money than ideas? Or are there more ideas than money?

Miura-Ko: I believe that capital actually has become quite abundant in this space. And so from a venture capitalist’s perspective, the competition is actually fairly intense. That said, not every single idea is being chased. So you’ll find actually great entrepreneurs out there who haven’t been found or who don’t fit the exact profile that everyone believes is the great startup founder. My job is to find those founders so that we can then build a business that has the potential for bringing prosperity to all.

Ryssdal: Well look, since you alluded to it, and since you are one of those on the list of, you know, “50 Brilliant V.C. Women in Silicon Valley” or whatever, you’re on all those lists, I do want to ask you about the role of venture capital in diversity in Silicon Valley and technology in this economy. I mean, you’ve expressed frustration with it, a lot of frustration.