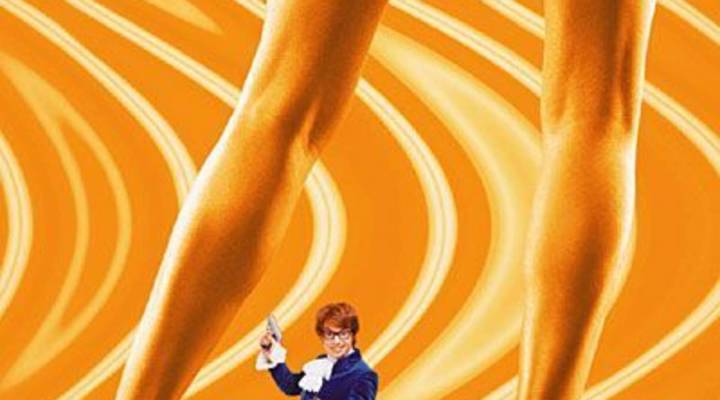 COPY
One of the many movie posters featured on Marcia Belsky's blog, Headless Women of Hollywood.

One of the many movie posters featured on Marcia Belsky's blog, Headless Women of Hollywood.
Listen Now

OK, not literally cut off. But many women in movie posters don’t have heads. Or they’re just disembodied butts, or legs, or breasts. If you haven’t noticed this before, you won’t be able to unsee how common it is after scrolling through the blog The Headless Women of Hollywood, which comedian Marcia Belsky created to document the trope of faceless, objectified bodies. Marketplace host Kai Ryssdal called up Belsky to talk about the phenomenon, which isn’t new and isn’t limited to any one particular genre. The following is an edited transcript of their conversation.

Kai Ryssdal: Tell me, would you, what a headless woman of Hollywood is, please.

Marcia Belsky: A headless woman, in my case, it’s for sexually objectified bodies where the body just exists completely free of any sort of identifying facial feature.

Belsky: Right. Yeah, I did eventually break out a little bit into advertisements and things like that, but mostly just movie posters, television posters and Hollywood marketing.

Ryssdal: So you know what’s amazing is, you see these going by on the street and whatever and you don’t really catalog them. But when you put them all in one place, as you have online, oh, my goodness.

Belsky: Yeah, that’s what I wanted to do because I think whenever it’s isolated, it kind of just blends into our background, these tropes that people are just so used to seeing that they don’t even evaluate. And I would sort of point it out to people when I’d be in New York and see subway ads, and my friends would go, “Oh, I guess I’ve seen that before, but do they really do it that often?” And then I just compiled one after the other, and I think the scrolling through it is what really got people to go, “Whoa, OK, this is a thing.”

Ryssdal: Yeah, totally true. I want to pick one movie that you wrote about not too terribly long ago, I guess. It’s a movie called, or was, I suppose, called “Intramural.” It starred Kate McKinnon, it was like her first big part, and then marketing got involved. Tell me the story of that film and what happened.

Belsky: Yeah, that was really interesting, because I had heard about that film — that was one of the first posters I saw. And it’s funny because there are two movies called “Balls Out,” and they’re actually not related to each other.

Ryssdal: You’re giving it away — we should say that “Intramural” became “Balls Out” because of the marketing.

Belsky: Right, so I’ll start from the beginning. So this movie “Intramural” was created and produced by this guy, Bradley Jackson. And it was a real indie film. It has a lot of, like sort of sketch comedians that I recognize as well as a bunch of people who went on to be on SNL, like Jay Pharoah. And it’s just sort of a bro-y sports film parody that’s supposed to play on all of the classic tropes of sports movies that we grew up with.

Ryssdal: And the original poster was kind of bland, right? It was a bunch of guys standing on a beach or something, right?

Belsky: Yeah. And it was you know in, Tribeca [Film Festival.] So it had the big Tribeca Film thing at the bottom. So then, somehow in the process, once it got bought from the studio, some studio exec told him that the title “Intramural” doesn’t pop, quote unquote. So they changed the title to “Balls Out” and they made the poster a headless butt. And there’s none of the stars that —.

Ryssdal: Of a woman, the headless butt of a woman —

Belsky: Yes, just a headless CGI female butt. And, yeah, it was kind of embarrassing for him because if you watch the actual movie, there’s no gratuitous nudity at all. There’s no real nudity. This was a movie that even though it was a lot of male stars, like Kate McKinnon was in it, and it’s a bro-y sports comedy, but there wasn’t unnecessary misogyny, and it was almost like the studios were saying that you can’t have a masculine film unless it’s built on misogynistic humor.

Ryssdal: In point of fact, what they said was, “sex sells.”

Belsky: Sex sells. Well, that’s what I get a lot with the project, and what the studio exec actually said to him was, “Clever doesn’t sell. Sex sells.” And he was saying that after being asked if they could include the Tribeca Film Festival logo on the poster, and he said that would make the movie seem clever. “Clever doesn’t sell. Sex sells.” And the thing is, of course sex sells, and I get that as a sort of dismissive answer to this project a lot. Well, sex sells. And it’s like, nobody is arguing that, but what I’m arguing is, who is selling sex? Who are they selling it for? And my argument is that sex is so inherently sold to us with female pleasure not even in the equation. It’s just about the male gaze and women being there for male desire to be in the background of male action. And it’s so common that we don’t even notice when it’s marketed to us that way.