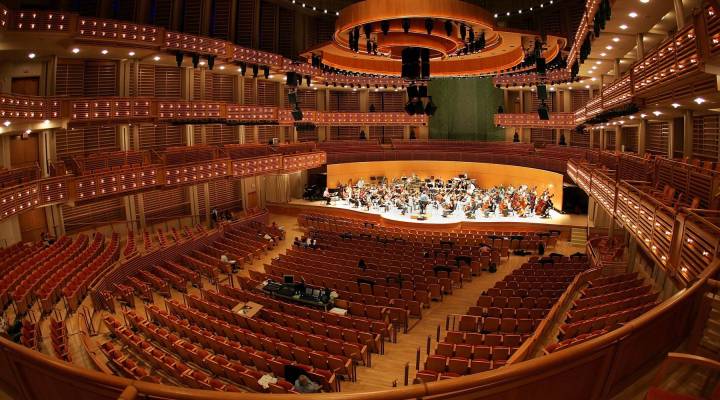 COPY
The New World Symphony rehearses on stage at The Knight Concert Hall in the Carnival Center for the Performing Arts October 3, 2006 in Miami, Florida. Joe Raedle/Getty Images

The New World Symphony rehearses on stage at The Knight Concert Hall in the Carnival Center for the Performing Arts October 3, 2006 in Miami, Florida. Joe Raedle/Getty Images
Listen Now

Gabrielle Skinner is in a coaching session for auditions at the New World Symphony in Miami Beach. She’s one of 18 musicians here, and she plays an excerpt from Beethoven’s Fifth Symphony on her viola.

Skinner, who plays with the Orpheus Chamber Orchestra in New York, is Latina and said sometimes she’s treated like an outsider in the realm of classical music.

“I’ve had experience of people being like, ‘Oh, she only got this cause she’s not white.’”

American orchestras are overwhelmingly white, according to a 2016 report by the League of American Orchestras. Black and Latino musicians make up less than 5 percent of orchestra members. A group made up of 700 orchestras and several nonprofits wants to change that — so the National Alliance for Audition Support launched an effort this year. It provides training and financial assistance to get more black and Latino classical musicians into auditions.