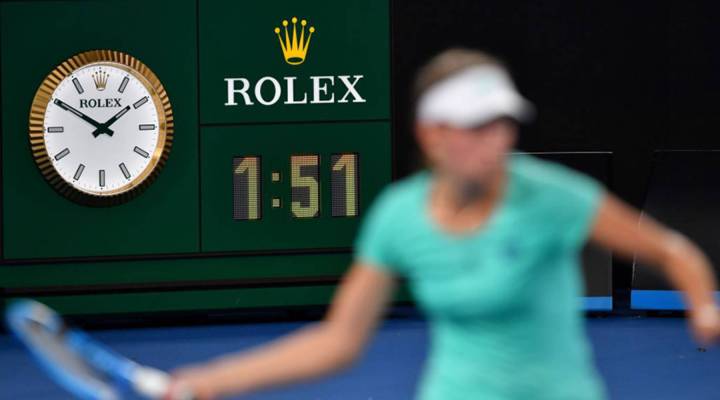 COPY
Belgium's Elise Mertens plays a shot beside a clock during a match against Australia's Daria Gavrilova at the Australian Open in Melbourne in January. PAUL CROCK/AFP/Getty Images

Belgium's Elise Mertens plays a shot beside a clock during a match against Australia's Daria Gavrilova at the Australian Open in Melbourne in January. PAUL CROCK/AFP/Getty Images
Listen Now

The U.S. Open Tennis Championships kick off Monday in New York. And this time around, the courts at Flushing Meadows will feature new serve clocks to make sure tennis players don’t dilly-dally for too long before serving the ball.

Up until now, the rules in Grand Slam tournaments have given players 20 seconds to serve the ball after a point. But in practice, some referees have applied the rule more strictly than others.

Some players have been slower than others, too. The world’s top-ranked men’s player, Rafael Nadal, is notorious for taking forever between serves, as he bounces the ball, wipes his face and tugs at his shirt. He sometimes takes nearly a minute to serve after a point.

“I can be faster, but I like to think,” Nadal said at a recent press conference.

“All sports are trying to speed up the game,” said Lisa Delpy Neirotti, professor of sports management at George Washington University.

MLB announced new pace-of-play changes before the start of its current season and is considering a 20-second clock for pitchers. The NFL has been trying to speed things up, too, by rejiggering commercial breaks.

“The longer it drags on without any action, the less focus there is by the viewer,” said Ken Shropshire, CEO of the Global Sport Institute at Arizona State University.

But faster matches might not appeal to hardcore tennis fans.

“If you have really appealing stars, it’s more likely the game will be more popular,” he said.

That may explain why the battle between Sloane Stephens and Madison Keys in last year’s women’s final helped drive up ratings. Ratings for the men’s final, between Nadal and Kevin Anderson, were down.