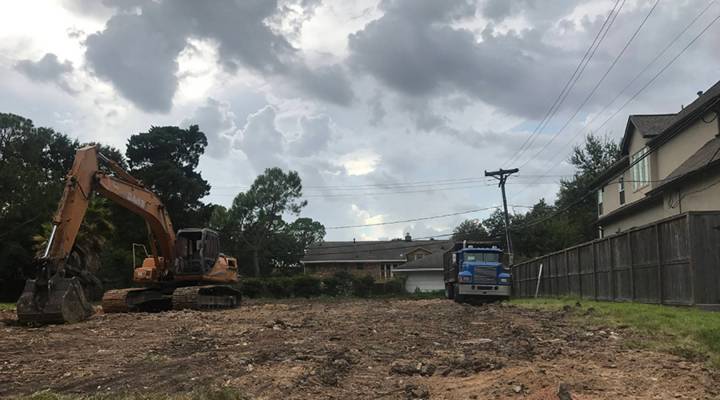 COPY
In the Meyerland neighborhood in southwest Houston, Texas, house debris is still being cleared a year after Hurricane Harvey. Andy Uhler/Marketplace

In the Meyerland neighborhood in southwest Houston, Texas, house debris is still being cleared a year after Hurricane Harvey. Andy Uhler/Marketplace
Listen Now

A year ago this week, a storm named Harvey dumped trillions of gallons of water on Southeast Texas. It left Houston, the fourth most-populous city in the nation, underwater for days. The damage caused by the storm is estimated to be more than $125 billion, and a lot of that damage was done to peoples’ homes. A year on, many neighborhoods are just beginning to rebuild, and residents face a tough decision: take any insurance or FEMA money from the disaster and rebuild or just cut their losses and leave.

About every third home on some streets in the Meyerland neighborhood of southwest Houston has a for-sale or for-lease sign in the yard. The neighborhood is now a mix of of ranch-style homes built in the 1950s and ’60s and brand new, modern spreads. Many of the homes are for sale by owner with a phone number written on the yard sign. Some sellers have recorded messages like this one:

“Thank you for calling about this home on Jason Street. The asking price is $395,000. The lot size is 12,450 square feet. The house only received between 18 and 24 inches of water during Harvey. That was the only time the house ever flooded. It was remediated within a week after the water receded.”

The owner/seller of this house may have stressed that Harvey was the only time this house flooded because so many homes in Meyerland have flooded two, three, even four times. Some folks in the neighborhood are tired of the stress and cost of living in a flood plain.

“I wouldn’t buy a house here because I don’t think it’s worth it,” said resident Simone Berko. She recounted details of the storm as she sat on one of the only things inside her home that wasn’t damaged — a toilet.

She and her husband, David, have their own for-sale sign in the yard. They bought their house in 2005 and David remembered a few smaller floods but, he said that Hurricane Harvey was definitely a game changer.

“We were here without any way to get out,” he said while pacing around his home that is now studs and concrete. “We were together for about 12 hours in the water, and I don’t have to tell you what kind of water it was.”

It was sewage-laden water, waist deep throughout the Berkos’ home. The Coast Guard rescued them in a raft, and they spent the following week living with their in-laws in Austin waiting for the flood waters to recede. With no mortgage on their house, the Berkos weren’t legally required to have flood insurance, and they didn’t buy it. Any repairs would be on their dollar. David said he and Simone don’t want to live here anymore. They’re retired, on a fixed income and don’t want to have to fret about future floods.

In fact, raising foundations for new houses above the old level is a requirement in Houston’s new building code set to go into effect Sept. 1. At least, that’s the requirement in neighborhoods like Meyerland or other areas considered to be in the 100-year floodplain. David Berko said he got a quote of more than $200,000 to lift up his house. He said that is too much for him.

A recent photo of the Berkos’ home. Simone and David Berko waded in sewage-laden water for 12 hours while Hurricane Harvey dumped 50 inches of rain on Houston. They didn’t have flood insurance and are now looking to sell their lot.

But it might not be too much for builders and developers who rushed into the area after the storm and have bought up thousands of lots around Meyerland. Everyone from billion-dollar hedge funds to mom-and-pop investors are trying to get in on the act.

Horacio Santos works with a group of financial partners acquiring homes in a similar condition to the Berkos’ — down to the studs and concrete. He said homeowners are tired of dealing with FEMA, insurance companies, the city and the county, so they are eager to sell to companies like his.

“It is a business, so we are going to take advantage of that, but we try to be fair about it,” Santos explained. “There are people out there that are low-balling big time.”

Santos said investors are making big money as they buy up houses that flooded on the cheap and flip them. But Harris County Judge Ed Emmett believes the wider community can often lose out. He explained the area’s flood mitigation strategy depends on the county being able to buy up property that repeatedly floods and turning it into green space.

“Some investors are coming in and buying some of the lower-income and middle-income properties and planning to fix them up and rent them as rental property,” Emmett said. “I hope that’s held to a minimum.”

“When investors come into those areas and either turn them into rentals or flip them for a profit, you have new owners who may or may not be aware of the flooding history and the problems there,” Wade said.

Texas law does not require landlords to tell tenants their homes have flooded or sit in a flood plain.

Marvin Odum, a former CEO of Shell Oil, was appointed chief recovery officer by Houston’s mayor after Hurricane Harvey. Odum said the government shouldn’t be dictating to the market what can and cannot happen.

In the Meyerland neighborhood, people spend afternoons walking their dogs and they wave to construction workers who are busy clearing away house debris and readying the land for new foundations — foundations that will be 5 to 10 feet higher than before.