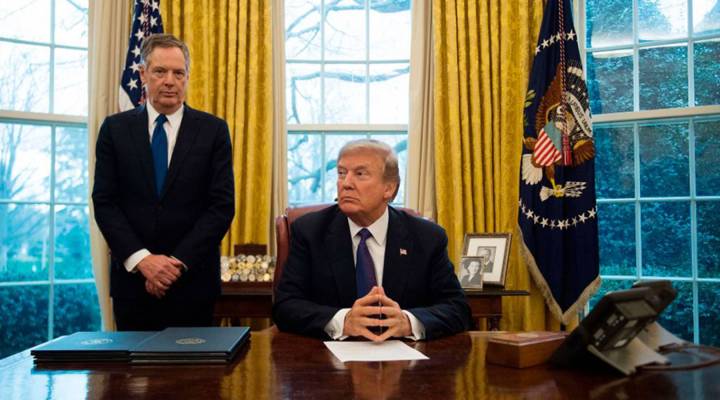 If you’re the global trade policy type, this is the week for you. This morning, the U.S. Trade Representative opened six days of public hearings into President Donald Trump’s proposal to tax another $200 billion worth of Chinese imports. These hearings, required by Section 301 of the Trade Act of 1974, are to let companies and trade groups affected by those tariffs weigh in. Here’s an indicator for you: Originally, there were only supposed to be three days of hearings.

Nicole Vasilaros, vice president of government relations and legal affairs at the National Marine Manufacturers Association, testified this morning. She told Marketplace host Kai Ryssdal that the general theme she heard from companies and associations testifying today was “tariffs are bad for U.S. businesses, and this back-and-forth war with China isn’t helping anyone.”

In her testimony, Vasilaros called recreational boats a “uniquely American-made product.” She said 95 percent of boats that are sold in the United States are made in the U.S.

“But just like many other companies and industries out there, we have global supply chains, and so these 301 tariffs on now $250 billion worth of goods impact those supply chains.” Vasilaros said the proposed tariffs will affect “everything from the fiberglass that makes the actual boat to the trailer that transports these boats to the water every year” and have “a real impact” on the recreational boat manufacturing industry.

Over 350 people are scheduled to testify at the USTR hearing. That includes representatives from the fashion, chemicals, bicycle and technology industries.

“People assume that we have giant tech companies that are part of our membership and that they can absorb the cost,” Wilson said. “However, that’s a gross oversimplification of the global supply chain.” She said the effect of tariffs can trickle through the economy. “You take a seemingly innocuous tariff code, and you extrapolate that to the effect on consumers, and you end up with price increases for everyday electronics such as cellphones computers, televisions, etc.”

Both Vasilaros and Wilson told Ryssdal that some of China’s trade practices are an issue, but that tariffs are not the right way to address it.

“There are [intellectual property infringements] there are unfair trade practices,” Vasilaros said, “but you don’t go about that through tariffs.”

“We think that tariffs are the wrong answer to the right question,” Wilson said, and she thinks there will be ramifications of President Donald Trump’s Section 301 tariffs “for years to come.”