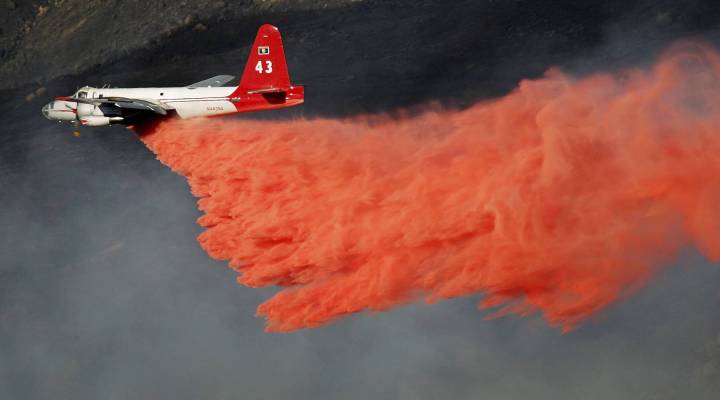 How would you feel knowing that perhaps 97 percent of Americans are walking around with a dangerous toxin linked to cancer in their blood? We’re specifically talking about flame retardants. According to an article in The Nation, flame retardants of varying kinds surround us and are a practically unavoidable part of our lives.

The article’s author, Jamie Kitman, explained to us how the industry, which started with an additive in gasoline, came to touch so many objects in our lives, from our homes to our cars. Below is an edited transcript of the interview.

David Brancaccio: So lead and bromine are mixed into our gasoline from the 1920s into the 1970s. But eventually seeing the unleaded writing on the wall, the big companies sell the additive business to a small Virginia paper company called Albemarle, which sees a new opportunity: house fires, especially houses of cigarette smokers. Some want to blame fires on cigarettes treated to burn longer. But there’s another approach?

Kitman: That’s correct. The tobacco industry, working closely with the purveyors of bromine, repurpose the bromine which had been using lead gasoline to become a flame retardant, thus avoiding any legislation that would affect how long cigarettes burn and things like that, but also creating a new market for the bromine. The only problem is, scientists at the time say this is very likely a carcinogen, it’s remarkably closely related chemically to PCBs, which we know are carcinogens. But the industry, just the way it did with lead, goes “Well, you know we’re not sure, let’s prove it.” So, that was four years ago … the earth today is covered in flame retardant as it was with lead, which has now been proven not just to be a carcinogen, but a mutagen.

Brancaccio: I mean, you don’t want houses and clothes to catch fire. No one does.

Kitman: No, of course not. But the flame retardants don’t necessarily, in the quantities used, prevent fires from happening.

Brancaccio: Now over the years a number of those fire retardant chemicals have been found to be highly toxic and in turn, they were taken off the market. But the current one, I think it’s called TBBPA, is legal, although there was a study suggesting it’s not good for you?

Kitman: Yeah, it’s it’s a game of whack-a-mole and it’s not unlike what we’ve seen with many chemicals that are on sale in the United States. There’s 80,000 chemicals, about 300 of them have been tested by the EPA. So, we sort of have to take companies’ words. But what happens is that somebody will go, “Well this is [something] we’ve definitively proven to be a carcinogen” and they go “Oh well, we just changed this molecule here, so it’s a whole new chemical and you’re going to have to test it all again.” So there’s basically no regard for what’s the almost certain outcome of those tests, which is that the product is dangerous and that is sort of the chemical regime under which we live. The obligation to prove something’s dangerous generally falls on the public and not the companies selling it.