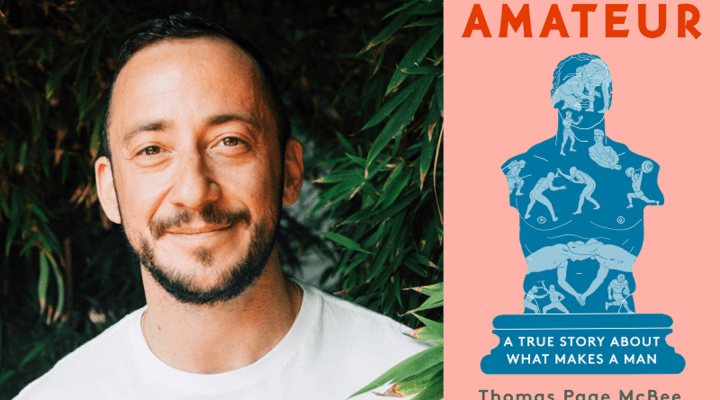 Whether it’s in politics, or a hit television show, or through writing, a record number of transgender Americans are making their voices heard right now. Thomas Page McBee is an author and a journalist who, in the midst of his writing career, transitioned at 30 years old. He’d had a couple of jobs and therefore gained the perspective of the androgynous co-worker and the male boss. McBee had a piece in the New York Times last week detailing his experiences in the workplace, when he realized his voice had power and how he learned to share it. He is also the author of the new book, “Amateur: A True Story About What Makes a Man.” The following is an edited transcript of his conversation with Marketplace host Kai Ryssdal.

Thomas Page McBee: I had just started a new job at the Boston Phoenix and it was in a new newsroom. I was pretty low on the totem pole. And I’d really only been on testosterone for a few months, but it had worked pretty quickly on my body. I was just noticing, like, sort of very rapidly, a lot of changes about not just how I looked physically, but the way I was being treated in the world. One place that was really clear was at work. At an editorial meeting, where people were talking over each other and having a lot of thoughts, and in my past life, before my transition, I had really been careful about when to speak and how much to speak. It was a lot of mental energy to figure out how to be assertive and make myself heard. And I noticed this just because it was such a dissonance, but when I sort of gathered the courage to say something in this meeting, everyone got silent very quickly. That was the first time that had ever happened to me.

Ryssdal: Did this realization change how you use your voice in the workplace?

McBee: It did eventually. At that time, there was such a whirlwind of other changes. As my life moved on, more at work especially, the ease in which I was able to do things that I hadn’t found easy at all. For example: promotions, or negotiating pay, or just even, you know, the rise I had in stature so quickly. I realized, like, over time that there was no way to avoid the reality that I was benefiting from being a man.

McBee: What I noticed was that if a bunch of women I worked with were talking, and I came up and contributed to the conversation in the way I was socialized to do so, which was through interrupting, everyone would get silent. And that was for me the moment where I realized, “Oh, this is a weapon, you know, this isn’t a tool anymore.” My voice, I mean. I’m creating an environment for people, whether or not any of us are conscious of it, where I’m making other people small.

Ryssdal: And you started keeping track of your own behavior, right? I mean, who are you responded to on emails and whose opinion you push back on. There was a bunch of stuff that you itemized, I guess.

McBee: Yeah, I mean, what I decided to do about it eventually was really to look at myself and my own behavior and start tracking what I was doing. So I started paying attention to how often I interrupted women versus men and how often I took men more seriously. And I was horrified by the way I had internalized this socialization that really started when I was 30 years old. So what I started to do was ask the women in my life, like, what sort of feedback would they give me, you know, and “What can I do to make your life easier, to make room for you?” Once I started doing that in earnest and taking those suggestions, things changed really quickly for me at work.

Ryssdal: On the flip side of that question, though, you talk about how men started treating you differently, right? People giving you the deferential “sir” and all that.

McBee: Yeah, I mean, I think being in the world as a man is incredibly different because your right to be in space is never questioned. And in fact, it’s upheld all the time. And the better you perform that masculinity, the more deference you’re given. So, of course, there’s an incentive to keep behaving in ways that are problematic, because that’s what power is. But I think making gender visible is a positive thing, especially in this cultural moment we’re all living through. So I think the ability to sort of see and name that this is happening I hope is useful to people who are not just trans but like all genders, because most of this sort of thing is so unconscious that we don’t even see it.