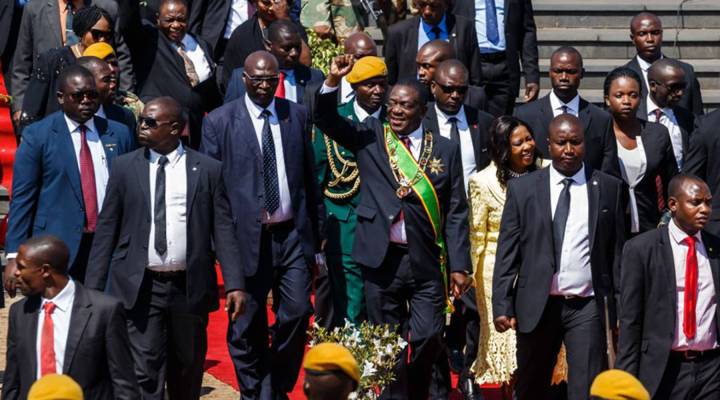 Zimbabwe’s presidential elections in July were supposed to be a chance for the southern African nation to show the world that it’s moved beyond the authoritarianism and economic isolationism that marked former President Robert Mugabe’s rule.

That hope faded when six people were killed in post-election protests. Officially, ruling-party candidate Emmerson Mnangagwa won a razor-thin majority. But his top challenger, Nelson Chamisa, is contesting the results in court. That’s delayed the inauguration that had been scheduled for Sunday.

Mnangagwa has served as interim president since November, when the military removed Mugabe from the office he’d held since 1987, seven years after the country achieved independence from the United Kingdom.

During Mugabe’s tenure, Zimbabwe’s economy contracted dramatically. Between 2000 and 2008, the country’s gross domestic product fell by half, the sharpest-ever reduction of a peacetime economy. Poverty rates soared to more than 70 percent. By 2009, hyperinflation prompted the country to abandon its own currency in favor of the U.S. dollar. That helped stabilize the economy temporarily, but a second bout of hyperinflation in 2017 has left the country desperately short on dollars.

Mnangagwa broke with his predecessor’s economic polices, which included strict limits on foreign investment. Shortly after taking office, the new president announced that his main priority would be fixing Zimbabwe’s broken economy.

In order to attract international financing and investment, Mnangagwa eliminated a requirement for most companies that mandated they be majority owned by Zimbabweans. He also promised to compensate white farmers for land the government seized from them and to streamline bureaucracy.

In the run-up to last month’s election, these efforts piqued the interest of international investors.

“There have been many people scurrying around looking for opportunities in Zimbabwe,” said Steve Hanke, an applied economics professor at Johns Hopkins University.

Investors see potential in Zimbabwe’s agriculture and mining industries, among others. Hanke’s mulling an investment in cold-storage facilities for warehousing fruit.

“We know there is a deficiency and we know precisely what it is in Zimbabwe,” he explained. “Whether it is going to be economic and feasible to actually design and construct a cold-storage facility and manage it, we don’t know yet.”

The election that was supposed to reassure investors only raised more questions.

Hanke said the opposition’s legal challenge of the election results is only one question hanging over Zimbabwe’s economic future. Others include whether the promised economic reforms will materialize, what the reformed monetary and banking systems might look like and whether investors will be able to pull money out of the country when they want.

The election showed that the new Zimbabwe looks a lot like the old one, according to James Hamill, a lecturer in international relations at the University of Leicester in the U.K.

“The mask of reform and reasonableness, all of that fell away when lethal force was used against unarmed demonstrators and there was a serious crackdown on opposition in the country,” he said. “That was a return to the past.”

The election “sends a negative message, showing the investment community that the government is not prepared or is not committed to respecting the rule of law,” said Talkmore Chidede, a trade and investment researcher at the Trade Law Centre in Stellenbosch, South Africa.