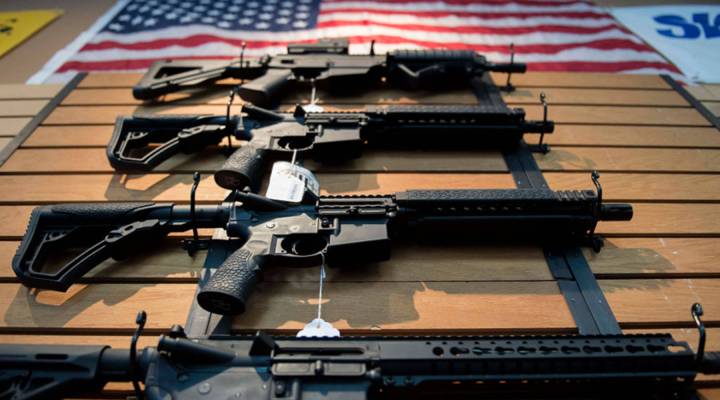 The idea behind “smart guns” is that only the registered owners of firearms are able to unlock and use them. The idea goes back to the 1970s, to a design that used a magnetic ring system that owners could match to their guns. The idea has evolved to use digital innovations. But even though the concept has been around a long time, smart guns still aren’t on the market.

Marketplace Tech guest host Amy Choi talked with Alex Yablon of nonprofit newsroom The Trace, devoted to reporting on American gun violence, to find out why. The following is an edited transcript of their conversation.

Alex Yablon: Now most of the [smart guns] that have been developed as prototypes either work with a fingerprint reader — a biometric device — or a [radio frequency identification] chip.

Amy Choi: So why are smart guns thought to be safer?

Yablon: Well, because, you know, there are hundreds of reported cases every year of children who injured themselves or killed themselves with a parent’s gun. There are thousands and thousands of guns that get stolen every year and often ferreted into the black market. And then you have cases of suicides committed not with a gun that the person actually owns but, say, with a family member’s gun.

Choi: So are the difficulties in bringing smart guns to market about the technology or is it about ideology?

Yablon: I think it’s definitely the latter. You know, biometrics and RFID chips are technology that millions and millions of Americans rely on in their everyday life for all kinds of things. If it doesn’t work initially in a smart gun, I’m sure it’s not going to be too hard to engineer these things and test them to make them work. But, because of the way that they’re touted by liberal politicians and activists and journalists, it sort of seems like something that’s not of the gun culture. And I think that makes a lot of the people who really drive the gun market — you know, really committed buyers who have very large collections — it makes them inherently suspicious of these things.

Choi: So it’s not really about the technology, but a lot of the resistance to smart guns coming to market is wrapped up in a New Jersey law that was initially supposed to promote smart guns. Is that right?

Yablon: Yeah, that’s correct. In 2002, New Jersey passed this law that said that as soon as any smart gun comes to market, those will be the only kinds of weapons permitted for sale in New Jersey. So that created a huge incentive on the part of pro-gun activists to prevent smart guns coming to market.

Choi: So are we going to see smart guns available anytime soon?

Yablon: You know, I think the big question is whether the smart gun manufacturers can get a police force or some other institutional customer to try these things out and demonstrate that they are reliable and work in the real world.